The PKK has suspended its withdrawal of militants from Turkey, casting doubt on the fate of the peace process. 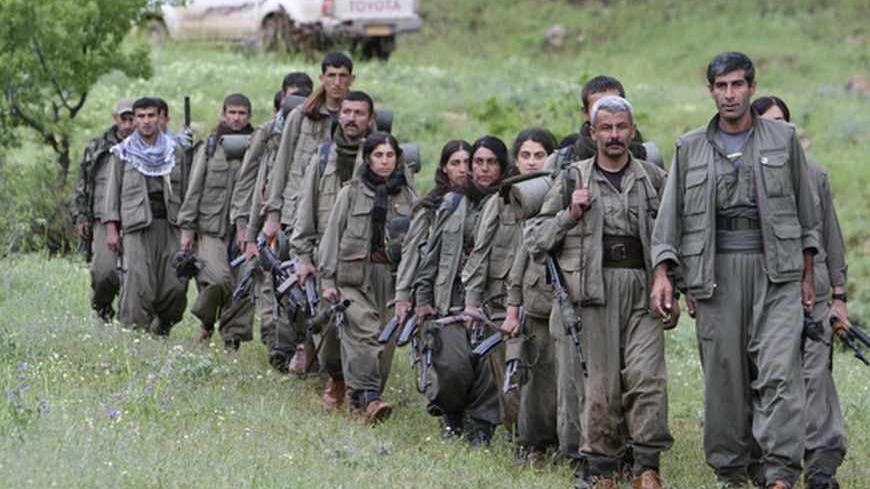 Kurdistan Workers Party (PKK) fighters walk on the way to their new base in northern Iraq, May 14, 2013. The first group of Kurdish militants to withdraw from Turkey under a peace process entered northern Iraq, but the withdrawal has stopped for now. - REUTERS/Azad Lashkari

The first phase of the peace process with the Kurdistan Workers Party (PKK) is the withdrawal of armed elements of the organization from Turkey. When the government was delayed in implementing required legal measures, the Union of Kurdish Communities (KCK), the umbrella organization of the PKK, announced it had suspended the withdrawal. The KCK had demanded the finalizing of the reform package by Sept. 1, but the government did not even think of calling the parliament back from its long summer recess to discuss it. The political milieu is worried: What is next? Is the process frozen, dead?

The most noteworthy reaction came from pro-Kurdish Peace and Democracy Party (BDP) deputy Pervan Buldan. She pointed to the real address to answer these questions: "We must urgently go to Imrali [where the PKK leader Abdullah Ocalan is imprisoned]."

Ocalan’s attitude, which has steered the process until now, will also determine the course it will take from now on. To see what is next, not only the BDP and the PKK but the government, too, has to sit down with Ocalan.

The salient points of the KCK declaration were:

All eyes on Ocalan

BDP people insist that the solution process is proceeding. The government nonchalantly says, "We are continuing even if they are not." The remark of Deputy Prime Minister Bekir Bozdag was polemical: "I see this as a tactic by the BDP and the terror organization appealing to their constituencies BDP thinks that if they go to elections in an atmosphere of peace, it will not garner support. That is why it is holding on to the terror card." And Bozdag has no compunction in uttering the oldest cliché of the state: "It is not correct to recognize the terror organization as an interlocutor by talking to it."

While the process is moving along on points agreed on with Ocalan in more than 50 meetings, to pretend the PKK is not an interlocutor is the true problem of the government. The government tunes its reactions according to public opinion.

In his last meeting with the National Intelligence Service (MIT) just prior to declaration of suspension of the withdrawal, Ocalan reportedly repeated his request to meet directly with his organization and also journalists. Polemics are wide-ranging, but the real issues that are blocking the process are the 10% election threshold, a formula for mother-tongue education, improvement of physical conditions for Ocalan, delaying reforms that include the release of incarcerated KCK people, continuing lack of mutual trust and the cabinet members' disregard for the language of peace.

Selahattin Demirtas, the co-chairman of BDP, in a chat with a group of journalists including this writer, when referring to the preparation of the reform package until Sept. 1 and completion of the legal process until Oct. 15, said, "But there will be no crisis if there is a delay." He said this was the position of Ocalan, who was constantly telling them, "Don’t make problems. Overcome any problem that arises. Don’t get stuck in details. We may not again get an opportunity to solve this 100-year-old issue. Regional developments might not allow us."

Demirtas said there was accord with the MIT team on steps to be taken, but there is no political will by the AKP. Demirtas quoted Ocalan saying, "I am not going to make new appeal. Then the state can go out discuss it with Kandil [PKK’s northern Iraq base]. I won’t get involved. If the process is clogged, I can’t be effective on what may transpire."

To take bold steps for peace, one needs political leadership. Instead, we have "leadership by opinion polls" that zigzags according to public moods. Dogu Ergil, who was a member of the Wise People Commission the government had set up to obtain popular support for the peace process, said: ‘The government takes opinion polls. In the polls, the peace process is interpreted as a kind of defeat. This was the impression we got while touring the country. The perception is, ‘Turkey has lost and that is why it is negotiating with the PKK.’ In Turkey, we have a tradition of not seeing democracy as achieving results through reconciliation, but the government appeasing the public with the decisions it makes. That is why nobody wants to achieve peace by dealing with a party that is labeled as ‘separatist.’ The state has not succeeded in securing social peace. The government is trying to move the process forward by dealing with quarters close to it.

First, the government waited for the Kurdish side to acquiesce and express its remorse. This didn’t happen, hence there was no reconciliation. The second was the government’s hesitance to comply with Kurdish expectations. AKP wanted to achieve its goals without giving much.

The belief that the government is not likely to take any major steps before the local elections is becoming prevalent. Daily Zaman columnist Ihsan Dagli is one of them. He wrote: "The process won’t die in its entirety, but we have to have the 2014 elections first for it to resurrect."

Is war the alternative?

One reason that contributes to the rather relaxed approach of the government is their conviction that the PKK would not relinquish what it has gained from the peace process. The primary gain it cannot give up is its recognition as a political interlocutor. The PKK, which has achieved amazing status not only as an interlocutor with Turkey but also legitimacy with the Kurdistan Regional Government in northern Iraq, is in a much stronger position in northern Syria’s Rojava and has become an influential partner of the Kurdish National Conference, which brings together the movements from four-piece Kurdistan. Ocalan’s declaration of the end of the armed struggle era was a clear sign of the PKK’s determination to hold onto its gains by avoiding a return to hostilities. PKK will henceforth sustain itself by political and communal actions. This is their strategy. But what happens if these expectations are not forthcoming?

Journalist-author Fehim Isik commented to Al-Monitor on the possibility of return to a hostility environment, the red lines Kurds might insist on and what may be the next step for the PKK: "I don’t think the latest KCK decision will in the short term become clashes. There is always the risk that changes in regional equations may again lead to clashes, but simply announcing the suspension of the withdrawal doesn’t mean resumption of combat. The PKK/KCK in response to the government’s slowing down the process because of the impasse it is in in Syria, and the approaching local elections, decided to suspend the withdrawal of their militants.

"Given the raging debate on the Syrian civil war and intervention there and the approaching Turkish local elections, I don’t think the government will take the serious, acceptable steps the PKK/KCK expect. Nevertheless, if the PKK/KCK is not dragged into a provocative environment, I don’t think they will be the ones to restart the clashes. But PKK/KCK may well resort to mass protests and civil disobedience actions to put pressure on government. The Kurdish movement, apart from its red lines, has short- and long-term demands they insist on. In the short term, these are the health and security of Ocalan, and in the medium and long term his release are the most prominent demands. Other irreversible Kurdish demands are the release of Kurds from prisons, to remove barriers to education in mother tongue, to give legal guarantees for Kurdish identity, elimination of paramilitary institutions like village guards, and to lower the election threshold to a reasonable level."

Demirtas responded to the question, "What will happen if the process don’t move along?" by saying: ''The alternative is war. But it is not easy to take that course. That is why we will do everything in our power to prevent blockage of the process. We are the ones talking to three sides. We will force all parties to it."

At the moment, the ball is the government’s court. If they do what is needed by process, instead of being guided by opinion polls, a totally different tension that Turkey might find tough to cope with is not too far off.