Although the Gezi protests led to debate on the position of the Kurds between the government and the protesters, they helped the government to refocus on the peace process with the Kurds. 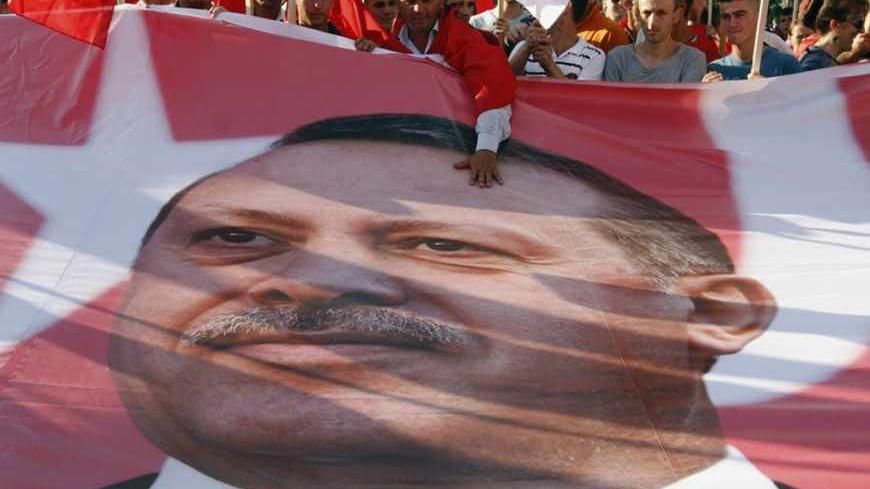 An Albanian man touches a banner with a picture of Turkish Prime Minister Tayyip Erdogan during a rally in support of Erdogan in Tirana, June 19, 2013. - REUTERS/Arben Celi

The AKP government’s approach to Gezi Park actions that upended established political perceptions also significantly increased doubts about whether it can take the solution of the Kurdish issue to its conclusion. Blissfully, the fears of the collapse of the process did not materialize. The government opted to treat the Gezi resistance and Kurdish issue as two separate processes. At least that is how it seems at the moment.

We have to set this out from the outset: Prime Minister Recep Tayyip Erdogan —  who in addition to his provocative and divisive style of dealing with Gezi events, also endangered the Kurdish process with his approach of legitimizing violence — doesn’t have the luxury of suspending negotiations with the PKK. This is why it serves no purpose to discuss Erdogan’s sincerity and intention vis-à-vis the process.

This is a process that compelled Erdogan to give up his plan to eradicate the PKK by ousting the Peace and Democracy Party (BDP) from the parliament and imprisoning thousands of Kurds with the KCK (Union of Kurdish Communities) cases. He had to search for peace. It wasn’t really a choice but an outcome of internal pressures and Syrian developments. The PKK’s attempts to dominate regions, its threats to transfer the clashes to cities and mass hunger strikes in prisons are what prompted Erdogan to search for peace. Such compulsive reasons might yet well return. Wavering now could be expensive for Turkey. To take a step back will be suicidal for the AKP.

The Turk who understands the Kurd

Let’s leave aside Erdogan’s claim that recent events are "a plot by those disturbed by the solution process of the Kurdish issue." The new atmosphere induced by the Gezi events could well be an opportunity for the peace process with the PKK. Kurds and Turks who until yesterday were suspicious of each other, together suffered nightstick blows and tear gas at Gezi Park.

Posters of Ataturk and Ocalan were next to each other. Although leftist organizations were not happy with reluctance of Kurdish movements to give full support to Gezi protests out of fear of endangering their peace process, at least the Turks in the West understood a bit the dilemma of the Kurds in the Southeast. This mood of understanding will undoubtedly contribute to easing of deep concerns about the solution process.

From threat to proposal

Before going into the latest developments that have created cautious optimism regarding the peace process, it is worth remembering the events that prompted Selahattin Demirtas, the co-chair of BDP, to utter, “The solution process almost lost but recovered at Gezi.”

Faced with these events that could have threatened the process, the government had to refocus on its opening to the Alevis and the Kurds. AKP is trying to stand firm at least on critical issues where the ground under is shifting. AKP truly fears losing it all.

Now let’s have a look at positive developments:

The following proposals stood out in the report submitted to Erdogan: A new constitution, education in mother tongue, abolishing the election threshold, changing political parties’ legislation, more authority to local administrations, political general amnesty, releasing Ocalan or at least improving his incarceration conditions, a system of federated states, restructuring of government’s religious authority, recognizing cemevis (Alevi prayer halls) as places of worship, compensation to all victims, demining, enabling a return to villages, stopping construction of military outposts, abolition of village guards, restoring former names of locations, solving the headscarf question, opening of mass graves, total restructuring of the educational system, abandoning the use of labels such as terror organization and "killer of babies,''  rehabilitating the reputation of people such as Sheikh Said, Said Nursi and Seyyid Riza, denouncing the 1937-1938 Dersim massacre, ending ethnic and sectarian discrimination and assimilation policies, for the state to apologize to the Kurdish people and also to the Turkish people for misleading them, and  avoiding such notions as "Turkish flag / Turkish nation / how proud to be a Turk / Turks’ only friend is a Turk / Turkey belongs to Turks."

The report illustrated that different segments of the society have loads of questions, from the division of the country to the fates of the PKK militants in the mountains. Decisive steps are called for to alleviate the fears of the people and reinforce their hopes for peace. The government's two steps forward, one step back tactic is not helping.

PKK/BDP thinks that the ball is now in the government’s court. But we also hear that Erdogan told the Wise Men commission he met in Istanbul that the first phase is not yet completed. According to Erdogan, only about 15% of the PKK militants have left Turkey. That means 85% are still within Turkish borders. Member of the commission journalist Avni Ozgurel told the Anatolian Agency: “There are reservations on the Kurdish side. The prime minister has more. He wants to take a step after ensuring certain things.”

If the government doesn’t take quick steps because of a mutual lack of confidence, the parliament that has to work night and day for the legislative changes is likely to begin its summer recess at the beginning of July and the entire summer will be wasted. Turkey has neither the time nor the energy to stop.