Turkey Should Press Ahead With PKK Process

Ankara’s reform package has disappointed the Kurds, but that should not slow the peace process. 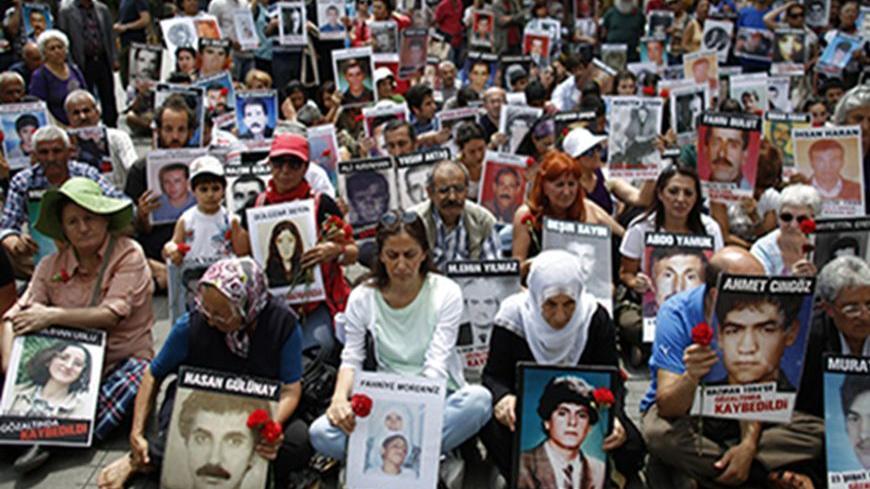 Turkish Kurdish people hold pictures of their relatives who were killed in clashes between Kurdistan Workers' Party (PKK) guerrillas and Turkish security forces, during a demonstration in central Istanbul, June 8, 2013. - REUTERS/Stoyan Nenov

Now that the Turkish government has unveiled a democracy package of “partial reforms,” the question is looming large: How will that sway the Kurdish peace process, watched closely both at home and abroad?

There are two points of view.

Prime Minister Recep Tayyip Erdogan’s chief political adviser, Yalcin Akdogan, writes in his column in the daily Star that the government is following a path of “gradual” normalization “with a mentality change simultaneously under way.” That is, as political analyst Sahin Alpay argues, the Justice and Development Party (AKP) is opting for a “piecemeal regime change.”

But a sense of disappointment prevails in the Kurdistan Workers’ Party (PKK) and its political wing, the Peace and Democracy Party (BDP). Oral Calislar — a member of the Wise Men Commission, which the AKP set up for the peace process, and an analyst who closely follows the Kurdish movement — makes the following observation: “Discontent is brewing in BDP quarters. From the very beginning, some segments had failed to grasp and endorse the objective of ‘laying down arms,’ set by [PKK leader Abdullah] Ocalan, and are now fanning a sense of pessimism over the settlement process. We are edging closer to yet another juncture.”

The most eagerly awaited reaction was that of Ocalan, serving a life sentence on a prison island in northwestern Turkey. “The package has nothing to do with me. It was drawn up by the government and the state,” Ocalan was quoted as saying by his brother, who visited him on Oct. 6. Ocalan added that he would make a detailed statement on Oct. 15.

According to the commander of the PKK’s military wing, Murat Karayilan, the PKK has halted its withdrawal from Turkey. In remarks to the PKK-linked Firat news agency, he said, “The process has reached a delicate point,” while adding that the PKK will not end the cease-fire unilaterally.

Selahattin Demirtas, BDP co-chairman, objected to what he called "granting our rights by installments" and said, "Our rights are being held hostage." He added, "This package has nothing to do with the peace process. There is no dialogue either. The government has de facto terminated the process. But we will struggle. We will open our schools and print our schoolbooks. It will also be up to us to solve the mother tongue problem."

“This is not a settlement package, but a package to toss the settlement process. It has exposed their mentality. Erdogan spoke for 45 minutes on the package, but never uttered the word ‘Kurdish.’ We know this mentality from the 1990s. It refuses to say ‘Kurdish’ and recognize the inherent rights of the Kurds,” Karayilan complained.

“From now on, the government should make legislative and constitutional moves toward a settlement. The Kurdish problem cannot be resolved unilaterally with slapdash packages,” he said. “The situation will be monitored for a few more days. We want to see what the state will do in the short run. If the state and the government fail to announce the required laws, we will announce our own. So, this period is very important for the process.”

This “high-level” PKK reaction contains a threat on the one hand and an obvious sense of caution on the other. The need for caution stems from the fact that the Kurds are overwhelmingly against a return to the “default settings” — that is, the state of war — and favor the use of all means for the peace talks. Hence, any PKK decision to end the cease-fire and plunge Turkey back into violence could backfire.

Erdogan’s tendency to move the process in a slow pace and gain time is therefore keeping the PKK under strain. Akdogan in his column signals the AKP would try to make the best of its “advantage” and seek to break the bond between the PKK and the Kurds:

“The detractors of the package refer to two [outstanding] issues — the convicted members of [the PKK-linked] Kurdish Communities Union [KCK] and Ocalan’s situation. It seems that issues concerning the Kurds are no longer of any significance for the PKK in the settlement. They seem to only care about what would happen to their organization.”

Yet, the PKK and BDP remain capable of disrupting the sly AKP strategy through nonviolent means and by increasing their “regional” weight across the border.

In fact, both the PKK and AKP are still testing each other’s limits, using political intellect and sharp experience accumulated over the years of mainly Kemalist/militarist oppression.

Some Turkish observers see little chance for a reform process that would directly address the PKK, while others call for calm and patience, arguing that the recognition of Kurdish rights and minority freedoms is irreversible, albeit slow. International experience, however, confirms that time is the greatest enemy of such processes. And given the additional factors of Syria and Iraq, optimism in Turkey could hardly prevail.

The most significant assessment of the package and the process came from the respected think-tank the International Crisis Group (ICG). In a comprehensive analysis, the ICG says Erdogan’s reform package is far from meeting long-standing Kurdish demands and warns that Turkey is entering another fragile period of swelling risks. The report titled “Crying ‘Wolf’: Why Turkish Fears Need Not Block Kurdish Reforms,” highlights the following points:

Erdogan is the main target of ICG criticism for taking “an increasingly nationalist line,” with his government failing to amend anti-terror laws and draft a new constitution. The PKK also takes a share from the criticism — over its rhetoric and ambiguous stance on the withdrawal.

Most importantly, the report underscores that “Turkey does not have to — and should not — link Kurdish reform steps to the negotiations with the PKK. Such democratization would improve access to rights, education and political life for all in the country.”

The ICG makes a series of recommendations to both sides. It calls on the AKP government to pursue reforms, namely to extend Kurdish-language education to all schools, ensure a modern constitutional definition of citizenship, ensure the devolution of some powers to local administrations and reduce the election threshold to 5%. The PKK, on the other hand, is urged to make “no linkage between democratic reforms and renewed acts of violence,” end “the creation of parallel state formations” in Kurdish-majority areas and reiterate commitment to the cease-fire and withdrawal from Turkish territory.

With the cease-fire now extending into the winter months, the AKP and PKK will likely show delicate care to preserve it. It is not hard to foresee that the outcome of local elections in March 2014 will shape the trump cards for bargaining and the course of arm wrestling.

Mithat Sancar, another member of the Wise Men Commission and a critical observer of the government’s policy, described the current stage as one of “controlled tension.” He may be right.