The killing of a Kurdish protester by Turkish security forces has heightened fears that the fragile peace between the government and the PKK may be coming to an end. 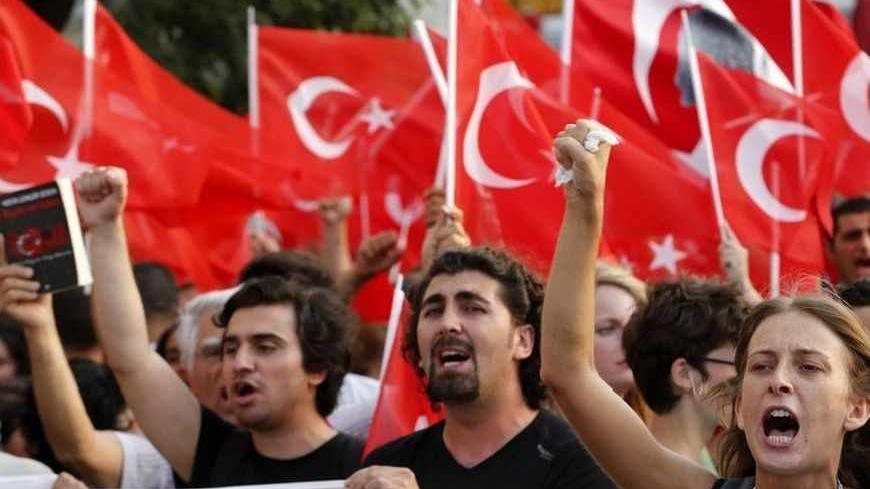 Demonstrators shout slogans during an anti-government protest at Taksim Square in Istanbul on June 29, 2013, after security forces killed a Kurdish demonstrator in southeastern Turkey. - REUTERS/Umit Bektas

Is Prime Minister Recep Tayyip Erdogan’s bold Kurdish opening aimed at ending nearly three decades of internal conflict coming to a close? The question has been weighing ever more heavily since June 28 when soldiers opened fire on a group of Kurdish demonstrators in the township of Lice in southeastern province of Diyarbakir. At least one person died and several others were wounded after the soldiers allegedly shot at the crowd as they began to flee.

The incident has sparked widespread fury among the Kurds and a flurry of condemnations from their leaders. “The state has shown that it won’t be honoring its promises (to the Kurds,)” charged Sirri Sureyya Onder, a lawmaker from the pro-Kurdish Peace and Democracy Party (BDP). The Union of Kurdistan Communities (KCK), a sister organization of the outlawed Kurdistan Workers’ Party (PKK), said in a statement. “The Justice and Development Party (AKP) government, with its increasing attacks, is espousing a stand that creates doubt and distrust.”

The unrest in Lice began when about 200 people, including women and children, marched on a gendarmerie post that was under construction in the village of Kayacik, demanding that it be instantly dismantled. Government officials insisted that the incident was orchestrated by local drug barons, who fear their business will be undermined by its peace initiative.  And the Diyarbakir governorate claimed in a statement that the villagers had attacked the gendarmerie post with sticks, stones and Molotov cocktails.

Tahir Elci, the chairman of Diyarbakir’s Bar Association, dismissed the villagers’ alleged drug links as “pure fantasy.” “While the crowd may well have engaged in “unruly behavior,” forensic reports proved that “security fires opened fire not to disperse but to kill,” Elci told Al-Monitor. “All of this is shaking people’s trust in the peace process,” he concluded.

Worries that talks between the government and the imprisoned PKK leader Abdullah Ocalan would fall victim to the violent street protests gripping Turkey for the past month had been lurking for some time.  The Kurds complain that the government has yet to reciprocate a series of gestures by the PKK, which declared a cease-fire in April and began withdrawing its forces from Turkey to Kurdish-controlled northern Iraq, in line with a secret deal struck between Ocalan and the government..

Murat Karayilan, the PKK’s top commander in the field went so far as to accuse the government of “preparing for war.” The construction of new gendarmerie posts, continued drone flights over the PKK’s bases in Iraqi Kurdistan and the recruitment of village guards, a state paid Kurdish militia, were proof of the government’s unfriendly intentions, he charged and hinted that his men might be forced to respond.

The BDP leader Selahattin Demirtas acknowledged in a June 26 interview with the mainstream daily Milliyet that the peace process had indeed “nearly collapsed” only to “recover.”

Demirtas added that “negotiations on a second phase” could begin and that the government would be announcing a set of changes to Turkey’s draconian anti-terror laws “within days,” thus paving the way for thousands of jailed Kurdish activists to walk free.

But on the same day that Demirtas’ interview was published, Erdogan put a damper on it all with a slew of hawkish comments uttered before the so-called Wise Men group, the motley gaggle of journalists, academics and pop stars who have been touring the country to sell peace to a doubting public on his behalf.  Erdogan told the group in a closed meeting that education in the Kurdish language was not on the cards. Nor was the government planning to lower the 10 percent of the national vote needed to win seats in the parliament (a rule devised by Turkey’s erstwhile military rulers to keep the Kurds out) to more reasonable levels.  Besides only 15% of PKK forces had withdrawn from Turkish territory so far,  claimed Erdogan. (The government says that it cannot move on Kurdish demands until the rebels have fully withdrawn). And in a pointed rebuttal of Demirtas’ claims, Erdogan added that there was “no reform package.” “We were horribly depressed,” a Wise Men’s group member told Al Monitor.

Erdogan’s words have confounded his fans and foes alike. As Fehim Tastekin, a contributor to Al-Monitor, put it in a recent column, shelving the peace process “will be suicidal for the AKP.”

Coming on top of the mass protests, a resumption of PKK violence would surely weaken the government’s hand in the run-up to nationwide local elections that are due to be held in March 2014.

What if the Kurds, who have sought to steer a neutral course between the government and the protestors, decide to defect to the latter side?  News of the violence in Lice sent thousands of protesters back into the streets, not in Kurds’ putative capital, Diyarbakir, but in Istanbul.

Middle-class urban “white Turks” chanted “killer state” as Kurds gawked in disbelief.  “After all the tear gas, the beatings, the water cannons, we now know what state brutality is,” said a physics major who declined to be identified by name. “We finally understand what the Kurds have endured all these years, we owe them a big apology,” she said.

Her comments are being echoed widely among Turks of all stripes, putting lie to Erdogan’s claims that the protests were part of a global conspiracy that aimed, among other things, to torpedo the peace process.

There are several explanations to Erdogan’s apparent turnaround. One is that by reverting to nationalism, he is seeking to rally his conservative base ahead of the municipal elections, which are now being billed as a referendum on Erdogan and the AKP. And as one senior government official told Al-Monitor, “Pressure always has the opposite effect on Erdogan. The more the Kurds push, the more he will resist.” The same official argued that “what matters” is what was agreed between the government and Ocalan. “The reforms (on the anti-terror law) will be carried out, the rest is just talk,” he claimed.

Without question, Ocalan’s enduring popularity among the Kurds is one of the main pillars of the peace process and helps explain why few have openly questioned the details of his deal with the Erdogan. But unless the government delivers on some of their demands, his grip may weaken. “There is a lot of distrust and it is becoming increasingly hard for us to persuade people especially young people to stay on board,” said a senior BDP official. Government officials confirm that a steady trickle of Kurdish youths continue to join the rebels. In a further ominous turn, PKK rebels abducted an army sergeant in Lice. Meanwhile, the BDP is planning a series of mass rallies over the summer to push for their demands.

Should the security forces keep responding with the same brutality as they did in Lice, “the peace process cannot survive,” predicted Elci.