The death of Medeni Yildirim on June 28 has brought the Turkish-Kurdish resolution process to the edge. 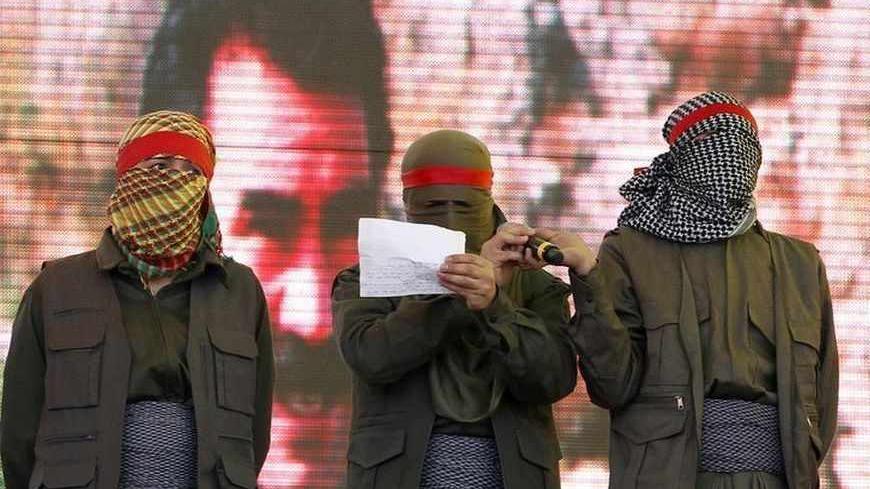 Masked supporters of jailed Kurdish rebel leader Abdullah Ocalan stand onstage as one reads a statement at a gathering to celebrate Nowruz in the southeastern Turkish city of Diyarbakir, March 21, 2013. - REUTERS/Umit Bektas

LICE, Diyarbakir — Lice is no ordinary place. It’s known as one of the most rebellious towns in Turkey, a hotbed of Kurdish nationalism. As documentary filmmaker Veysi Polat put it to Al-Monitor, “Sheikh Said established his main quarters in Lice, and rode to Diyarbakir with 2,000 horsemen, marking the beginning of the rebellion [against the state in 1925]. Kurdistan Workers’ Party, PKK, was founded on Nov. 27, 1978 in a congress held in Fis village of Lice, and (Abdullah) Ocalan was elected its chief. It’s the first place burned by the military (in the fight against terrorism) in 1993.” And the list keeps going, making it an extremely politicized place.

So when the news broke on June 28 that a Turkish soldier killed a Kurdish civilian protesting the construction of a gendarmerie post in Lice, it immediately emerged as the first challenge to potentially derail the resolution process led by Prime Minister Recep Tayyip Erdogan’s government and the imprisoned PKK leader Abdullah Ocalan to find a solution to the Kurdish issue.

At the outset, this incident appeared mysterious for several reasons. First and foremost, the Erdogan government has significantly restricted the military’s routine patrols and the operations in the past five or six years in the region; the military was ordered to stay away from any hot clashes with the PKK after the process started. What’s also become striking is that while not even a leaf stirred in the Kurdish parts of Turkey during the monthlong protests against Erdogan on the west side of the country in June, the state officials speaking to Al-Monitor in Ankara considered this protest at the construction site of the gendarmerie post at Kayacik, Lice — with its timing and place included — as an attempt directed by the PKK to put pressure on the government frazzled by the Gezi Park protests to take faster steps in making constitutional changes. There is still significant lack of trust on both sides.

“There is something called the process, but they keep building new checkpoints in our areas. Speaking of making peace and strengthening the security apparatus here are contradictory, and we went to the construction site of that checkpoint in Kayacik to make our point,” Mehmet Yildirim, 21, told Al-Monitor. Mehmet is the elder brother of Medeni Yildirim, 19, allegedly killed by a Turkish soldier's bullet during the chaotic mess at the scene. “We were about 300 to 350 people. A group of 10 to 15 came from behind. They had Molotov cocktails, and they were the ones who put the tents on fire. I don’t know who they were, but I know the soldiers lost their heads and started pouring bullets on us. I thought I would not make it, but it happened to be my brother to fall there. Kismet, he became a martyr in front of my eyes.”

Another protester, an eyewitness to the incident, told Al-Monitor, “It was not the gendarmerie from inside the post that fired on us. The ones inside only fired into the air, but the bullets that killed Medeni and wounded a dozen more all came from behind. We all looked back when the first one fell. We know that it was a sniper from the gendarmerie watch tower up on the hill. They did not have to kill. This was an unprecedented and a needless attack.”

“We consider the construction of this new gendarmerie post as a provocation,” Harun Erkus, the pro-Kurdish Peace and Democracy Party's (BDP) Lice chairman, told Al-Monitor. “When we went there, the commander called me inside the post to talk. I went there and told him that we won’t allow such provocations, and that the construction of this new post is against the peace we want to build. He told me in return that they are building the new site to be resistant to earthquakes, and that there is nothing to feel threatened about.”

Although Al-Monitor wanted to hear the military’s side of the story, it was turned down as there is an ongoing investigation on the incident. There are two inspectors from the military and two inspectors from the Interior Ministry assigned to unveil this incident. One state official, speaking on condition of anonymity due to the sensitivity of the issue, told Al-Monitor, “There is no cover-up here. Whatever had happened there, we will find it, and get to the bottom of it. We’re also deeply saddened by the loss of a bright young fellow like Medeni.”

“He went home for lunch after Friday prayer when his friends came to pick him up,” Medeni’s elder brother Mehmet told Al-Monitor. “He even left his plate unfinished and went to attend the protest. I did not know that he was there, but I saw him from a distance before things got out of hand.”

Another eyewitness told Al-Monitor, “He was trying to help a wounded person to get up when he was shot to death. He was a good boy.” Indeed, he seems to have left a mourning crowd of people behind him, all speaking with praise and good memories. Veysi Polat, Medeni’s cousin, told Al-Monitor, “We learned his score in the university placement exam after he died. He received 318 points, which is not bad at all. He dreamed of being a governor or a district governor, and he would have easily be placed at Dicle University with this score to make his dream come true.”

Medeni’s death, however, seems to be leading to some unprecedented benefits in building bridges between two peoples. “When I saw on television people carrying my brother’s picture in Istanbul, Ankara and Mersin, I felt touched, and that helped to heal my sorrow,” Mehmet, the brother, told Al-Monitor. “Something like that indeed happened for the first time,” Fikriye Aytin, Lice's BDP-affiliated mayor, told Al-Monitor. “We have always been pushed to be the 'other,' and we never felt that the people in the West shared our pain and loss. I hope we can turn this into a permanent bridge between us, and really start empathizing about each other’s loss. We also don’t want any Turkish soldiers to die in this fight.”

That said, there is an undeniable resentment of Turkish soldiers’ presence in the region. If they were to leave all at once, the Kurds would be delighted. The Kurds seemed to convince themselves that the soldiers could only lie about the facts of this issue. State officials, on the other hand, feel that this could be a provocation by some powers. “These 10 to 15, or 25 that came from the back had their faces masked, and eyewitnesses that talked to us made it very clear that they were there to create trouble. They came marching in, military style, chanting in Kurdish 'left-right, left-right,'" one government official speaking on condition of anonymity told Al-Monitor. “But we all have to wait for the result of the investigation. The government has sent out these inspectors here to unearth the truth.”

Kurds, however, seem to have no trust in the government or the inspection into this case. “The prime minister has already announced the result of this investigation — that it’s the drug cartels responsible for it all,” said Erkus, the BDP Lice chairman.

"What happened in Lice is not something ordinary. The Lice incident rests indirectly on cannabis cultivation," said Erdogan during his weekly address to his Justice and Development Party's (AKP) group in parliament on July 2. He said that the protests in Lice had nothing to do with the construction of new military posts and pledged to press ahead with the building of the new outposts. "To cover up this dirty, bloody trade with these protests and to try to make it seem like a democratic claim — to say the least, is immoral and remorseless," Erdogan said.

“What hurts me the most is the prime minister’s attempt to tie my brother, my family, my name with drug cartels. It’s such a big insult, I can’t express you how disappointed I am about this,” Mehmet, the slain protester’s elder brother, said.

Although none in the province hide their sympathy and loyalty to PKK and Ocalan, they also seem to be trying to break away from being perceived as “terrorists.” To build upon Medeni’s death, a few of his friends proposed to “build a library instead of a military post.” Serhat Gunes, one of the friends of the late Medeni, told Al-Monitor, “The others don’t want their names to be known, because they don’t live here, and feel concerned of any potential backlash by the state. But we are already receiving enormous support from all around donating books to us. Architects and constructors also agreed to donate their labor, and we’re all good to go.”

Lice Mayor Aytin also helped this mourning family and his friends by allocating a plot of land to build the library in the name of Medeni Yildirim. Only time will tell whether his name will indeed help serve building bridges between Turks and Kurds, or will push them further apart.