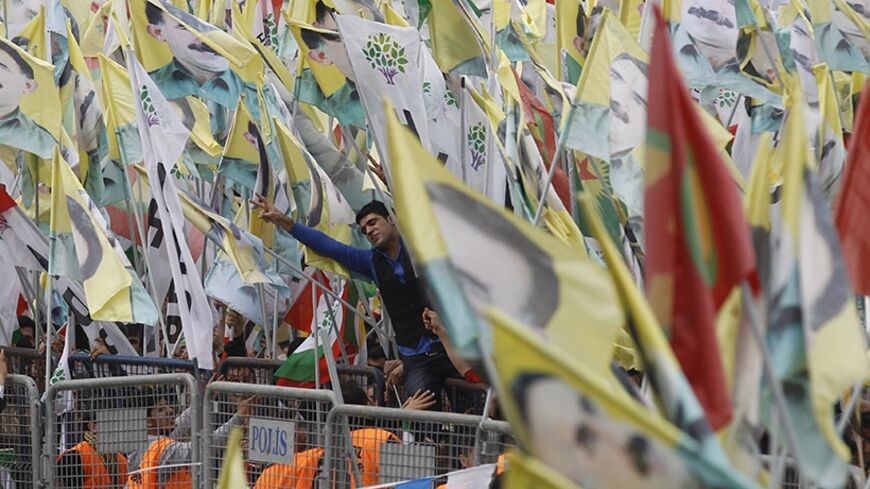 People take part in a gathering in Istanbul, March 23, 2014. Jailed Kurdish leader Abdullah Ocalan of the Kurdistan Workers Party (PKK) called on the Turkish government to create a legal framework for their peace talks. - REUTERS/Osman Orsal

On April 27, a group of Kurdistan Workers Party (PKK) sympathizers blocked the highway from Diyarbakir to Bingol — close to the intersection with the road to Lice — in protest of a gendarmerie post under construction at Abali, a nearby village. After stopping a commercial bus around noon, the PKK sympathizers realized while checking identities on the bus that there were two specialist-sergeants among the passengers. They were abducted in broad daylight.

When the news reached the gendarmerie post only 6 kilometers (3.7 miles) away, a detachment of soldiers was immediately rushed to the area. Fighting broke out, leaving nine soldiers wounded, none in critical condition. The highway remains partially closed to traffic.

On April 23, the PKK also kidnapped 25 students around the ages of 14-16. Erol Borcum, whose son Sinan, 15, was one of those kidnapped, told Al-Monitor that the PKK and the pro-Kurdish Peace and Democracy Party (BDP) members were lying when they said the students willingly went up to the mountains to join the militants.

“We gave permission to the school only to take our kids to the spring festival on the Tigris riverside — not far from this Abali gendarmerie construction site. Deviating from the purpose of this trip, they took our kids to this protest site. The PKK members lined them up and questioned them. And, for some reason, my son told them that his mom’s brother was also up in the mountains,” Borcum told Al-Monitor. “But I swear to you I don’t understand politics or want anything to do with the PKK. I am my son’s best friend. He is a naive and a quiet kid. He does not understand anything about the PKK or their violence. I want my son back.”

As his voice started to tremble, the father told Al-Monitor, “BDP Diyarbakir Chairman Zubeyde Zumrut wasted my time by providing conflicting information. She now says that these kids all went up to the mountains of their own consent. It is a lie. There are eyewitnesses telling different stories — especially about a girl shouting, and crying, resisting them. I went to the Diyarbakir police department today [April 28] to file my complaint. And I am calling on our prime minister, our president to please help me find my son and bring him home. Then I will leave Diyarbakir and this country. This is not life here. I have cows, I milk them, and make our living like that. I clean their dirt, and I'm happy to do it all for my family. But I can’t lose my son, and can’t raise him up here if I and the state won’t be able to provide him security!”

Borcum's family has been sitting in protest at the riverside spot where their son was kidnapped, awaiting his safe return.

Moreover, the PKK kidnapped four Turkish soldiers on Dec. 8, 2013, on this same highway, in reaction to the rumors that the state was tearing down the PKK cemetery in Yuksekova, Hakkari. Turkish Prime Minister Recep Tayyip Erdogan was quick to react to the news then: “Those who want to harm the process [of negotiations with the PKK] cause these events. The events in Hakkari [where non-state actors damaged the cemetery] were also caused by the same kind of people,” he said. “We won’t fall into this trap, but will continue with the process. There is nothing else to say besides that we expect our soldiers to be released soon.” The soldiers were released the next day.

Now it is a different story. The prime minister has been quiet on this issue, although he has addressed the public several times since then, while the PKK continues to showcase its dominance in the region. “Zubeyde Zumre and other BDP members went to talk to those PKK militants who kidnapped the soldiers yesterday, but there is still no news,” Hamza — a Lice resident who did not want to give his full name — told Al-Monitor: “I don’t think they will be released quickly now like the last time, because people believe that the state is building up these gendarmerie posts in preparation to stage a war against the Kurds in the coming few months. Otherwise, why should they build these posts here when we talk about peace? If there was no cease-fire, the state couldn’t build these facilities here. They are simply abusing our goodwill.”

Hamza also recalled a deadly protest of a nearby gendarmarie post construction in June 2013, where the Kurds charged that 19-year-old Medeni Yildirim was killed by the military. Although there are video recordings that openly show a PKK group walking from the back and throwing a Molotov cocktail at the soldiers, creating a chaotic scene and making it all too difficult to assess who really killed this boy, Hamza said, “Since that incident, the state stopped the construction there. People want to do the same in terms of this construction at Abali.”

The list of violations of the cease-fire by the PKK and its sympathizers could be easily multiplied. The government, however, chooses to downplay all these incidents. For example, on March 27, PKK sympathizers threw a Molotov cocktail inside the car of a female police officer, Zeynep Ozcelik, in Silopi, and prevented her from getting out of the car for some time. She was brought to the military hospital in Ankara with critical and life-threatening third-degree burns. She did not survive this attack.

This is all to say that the PKK continues to use its violent tactics to impose its will on the state. And the Erdogan government’s decision to put the imprisoned PKK leader Abdullah Ocalan at the center of this critical process unfortunately only helped the PKK to be considered as the sole representative of the Kurdish people. Kurdish families like the Borcums are rare in the region, and the majority of Kurds justify the PKK violence at all means in defense of the Kurdish people. This Kurdish approach is likely to be a stumbling block before a meaningful and lasting peace between the people of this country.