Sinan Bockum, 15, has safely returned after being kidnapped by the Kurdistan Workers Party following protests by his family, but others are still held hostage. 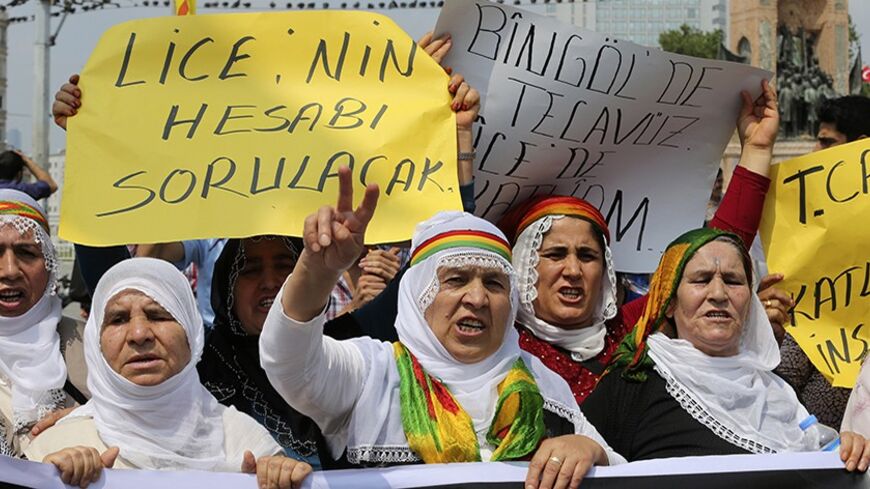 Protesters shout slogans during a demonstration against Turkish security forces in the Lice district of Diyarbakir province, June 29, 2013. Recent confrontations over the construction of a gendarmerie outpost in Lice have led to a string of kidnappings by the PKK. - REUTERS/Umit Bektas

A rash of kidnappings by the Kurdistan Workers Party (PKK) may destroy all the progress made in the peace negotiations since 2006.

While the peace process may be going nowhere, the separatist militant group that has battled Turkey for over three bloody decades has deepened its dominance in the majority-Kurdish southeast and has not given up its violent tactics — including toward civilians — to accomplish its goals.

On April 23, the PKK kidnapped 25 children between the ages of 14 and 16 near the construction site of the Abali gendarmerie outpost in the Lice district of Diyarbakir. On April 28, Erol Bockum, whose son Sinan, 15, was one of those kidnapped, told Al-Monitor, “We gave permission to the school only to take our kids to the spring festival [organized by the Peace and Democracy Party (BDP)] on the Tigris riverside — not far from this Abali gendarmerie construction site.”

The PKK asserts that the construction of such outposts is a sign that the state is preparing to launch a war against the Kurds in the region, and therefore rallies the people in protest of these buildings. Erol added, “Deviating from the purpose of this trip, they took our kids to this protest site. The PKK members lined them up and questioned them. … He does not understand anything about the PKK or their violence. I want my son back.”

Bockum spoke out, incredulous, when he heard Selahattin Demirtas, the former co-chairman of the pro-Kurdish BDP, say on April 28: “These children went up to the mountains voluntarily. There is little we can do about this.”

“The part of it that these people don’t understand,” Bockum told Al-Monitor April 30, is that “my son is only 15 years old. He may have made a mistake, but I say as his guardian that I want him back. I want him back from the PKK, from the BDP, from our president and from our prime minister. I may be illiterate and poor, but I won’t turn my back on my son even if he might have made a mistake. I am the father.”

The Bockum family marked a first in the region by putting up a tent near their house the moment they realized that their son had been kidnapped by the PKK to start a sit-in protest.

“This is really a poor family. Erol has only few cows. He milks them and looks after his family — that is it, but we love our son. The state or whoever should help us to rescue him,” a close relative of the Bockum family that chose not to be identified told Al-Monitor over the weekend. “We were told in particular that one of the girls resisted so strongly — but to no avail. Her parents came to our tent. Aysel [Sinan's mother] told them to come and sit with us until we get our kids back. They never have come back. No one understands how courageous it is for this family to stand up against the PKK here, in their heartland.”

That courage brought their son back. Sinan was dropped by the PKK near his house late in the evening of May 4, 12 days after leaving his house on Turkey's 91st National Sovereignty and Children’s Day.

“He was returned to us late last night, and he is all right now,” the father told Al-Monitor on May 5. “As he is home with me, we don’t want to be on the news any longer.” He thanked all for their interest and hung up the phone. A local speaking to Al-Monitor said, “The family does not even want to show the face of their son to the media. They are fearful that this is not over yet.”

Sinan was questioned at the counterterrorism branch of the Diyarbakir police department for a few hours the morning after his return. All that is known to the public so far is that Sinan’s eyes were tightly closed during his ride from where he was held to the point where he was dropped near his house, and that he had no knowledge of his whereabouts. He was also separated from the rest of the children abducted, and therefore has no clue of their locations, either.

“Some have already returned safely to their families, and no one can really keep the account right about them here,” a local in Lice told Al-Monitor. “People know each other here, and they have a close network with the PKK. That is how it works. But this family has nobody, and they are so poor, and they created a scene out of this that made a lot of people angry.”

While this incident came to a happy resolution for the Bockum family, police reports circulated in the Turkish media May 5 that the PKK has kidnapped 331 children in the last six months. Even that is still not the whole story.

“The PKK also kidnapped my son on April 9. It’s been 27 days, do you understand that?” Ahmet Karasin asked Al-Monitor May 5. “Ali will turn 18 in August. So what will happen now? We are happy for Sinan that he was returned because he was 15, but I am at a disadvantage because my son is about to become of full legal age. I also want my son back. But how do we speak up here? Who cares about us? Write this down well, so people learn about our pain and what it means to be poor.” Karasin is a construction worker in Diyarbakir and hardly able to make ends meet. He said that Ali had been attending some meetings with PKK sympathizers.

“He may be turning 18, and then I may have less of a right as his guardian, but he is still my son and it does not change the fact that I don’t want my son to join the PKK’s fight. This kid left school two years ago, but he is still trying to finish by taking courses from a correspondence school. He goes to mosque and takes lessons to read the Quran. We have not heard from him since he went to his Quran course on April 9, and we know he was also abducted by the PKK.”

“We kept silent so far, but I also want my daughter back. Please, she has epilepsy. Her health is not well. Give her back to me,” she said. While those who come forward to speak to the media and rally the nation for the rescue of their children are few in number, their outcry tells a different kind of a story about the PKK’s representation of the Kurds — at least for some in the region. Unfortunately, maybe because the people of Turkey are so conflicted about Kurdish approval of PKK tactics, these abductions do not get their fair share of coverage by the mainstream media. Alas, think about this: If 25 children were to be abducted in the western part of the country, all in once, people would have already hit the streets demanding the state use all its power to rescue them. As the Kurds in the region don’t present the same kind of reaction, their silence when their children are lost can be puzzling. On the other side of the token, the state may be rightfully accused of treating its citizens unequally by failing to respond to PKK kidnappings with full force.

The Erdogan government has not accused the PKK of violating the cease-fire that was put in effect in March 2013, and has kept quite about these latest incidents. The PKK abducted two military officers in broad daylight on April 27 at a point close to Lice, in protest of a gendarmerie post under construction at Abali, a nearby village. Nine soldiers were also wounded in the fighting that broke out later that day with PKK sympathizers.

People’s Democratic Party (HDP) members negotiated with the PKK to free the soldiers, which they did May 1. The HDP's Istanbul deputy Sirri Sureyya Onder told reporters, “We recovered these soldiers and in return promised the PKK that we will resist through political channels. I promised them that we will stop the building of these gendarmerie posts.”

Also just in the last few weeks, the PKK kidnapped seven cell-phone company employees May 24 in Diyarbakir. Five were freed, but there is still no news about the two people remaining in their hands. On April 17, the PKK kidnapped four construction workers at a nearby dam in Diyarbakir and released them after three days in Elazig. The list goes on.

The path ahead for Kurdish citizens who don’t toe the line with the PKK is looking more challenging as the peace process has visibly and undeniably made the PKK the sole representative of the Kurds in the region, and their dominance does not promise the glory that many of its sympathizers believe it does.