About two dozen Kurdish families have come forward since May 19 in protest of the Kurdistan Workers Party’s abduction of their children. 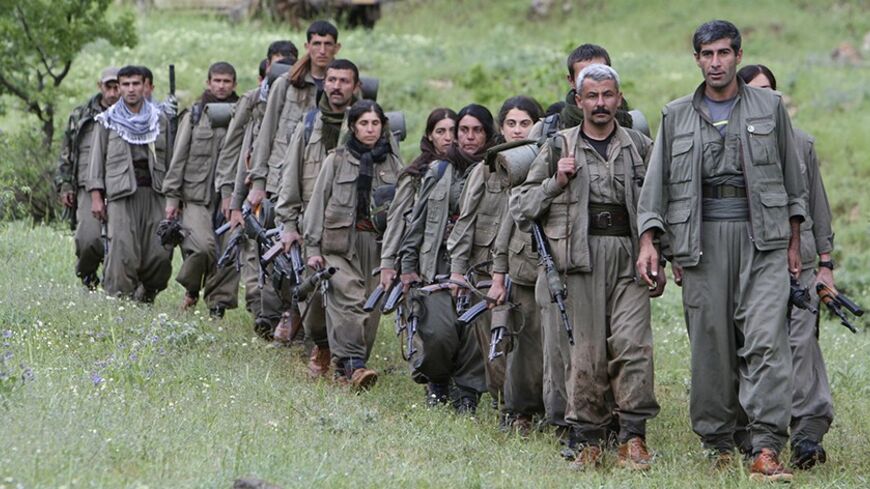 Kurdistan Workers Party (PKK) fighters walk on the way to their new base in northern Iraq, May 14, 2013. - REUTERS/Azad Lashkari

It all started on April 23, the day Turkey marked its 91st National Sovereignty and Children’s Day. While in the western side of the country children were in a festive mood, the Kurdistan Workers Party (PKK) kidnapped 25 students between the ages of 14 and 16 on the east side of the country, in the Lice district of Diyarbakir.

Sinan Bockum, 15, was one of those kidnapped. His family did a most unexpected thing when they got the news about what happened to their son. Although the PKK has kidnapped more than 330 minors in the last six months, the Bockum family was the first in the region who put up a tent near their home to start a sit-in protest, challenging the PKK and demanding that it return their son. Sinan was returned to the family on May 4. Al-Monitor reported this incident from the beginning in depth.

None of the other families whose sons and daughters were kidnapped with Sinan on that day, however, joined the Bockum family during their sit-in at first. On May 19, that story changed. Ahmet Gunduz and Selami Eren started their sit-in protest in front of the Diyarbakir mayor’s office. Gumduz’s daughter Halime, 15, and Eren’s son Firat Aydin Eren, 15, were kidnapped on the day Sinan was taken by the PKK. “In the beginning we trusted to our own network and thought we could take back our kids safely from the PKK,” Selami Eren told Al-Monitor. “But it led to all dead ends, and we were left with no choice but to actively start this protest.” He said, “My son has very weak bones. He got me mad just two weeks before he was kidnapped, and I held his hand tight out of anger. I should not have done that. I broke two of his fingers just by that. If something happens to him on the mountains, he is too fragile. I lost all the sleep that I have thinking about all the potential wrongs that could happen.”

Halime’s father, Ahmet, said, “We started as two families on May 19 [in] our protest before the Diyarbakir municipality. We are now about 21 families and the number keeps going up. All we want is our kids and peace. We don’t want the PKK to kidnap our kids. We don’t want to see any fighting between the security forces and the PKK. Both sides are our own people. Enough of that violence already. We just want a normal life.”

The PKK, however, is strong in Diyarbakir and the families’ public appeal received mixed reactions. “There are those who accuse these families of betraying the Kurdish cause and allowing themselves be used by the state to weaken the PKK at a time when it really has captured an exceptional strength at the negotiation table with the Erdogan government,” one local, who asked not to be named, told Al-Monitor. “There are those who are really angry to these families, and would have preferred them to simply shut up.”

Just like the Bockum family, these families who sit in protest of the PKK’s kidnapping their children are in fact acting with a unique bravery. Since the Erdogan government agreed in 2006 to start negotiating with the PKK to resolve the Kurdish issue, it has become easier to address these matters as the taboo was broken. “These Kurdish families now remind the people across the country that the PKK is certainly not as innocent as its recent image prevails, and it certainly is no organization that upholds democratic standards or human rights,” the same local told Al-Monitor.

Families, on the other hand, express desperation that they are being pushed into politicking. Ahmet Gunduz, for example, said that he works in northern Iraq as a construction worker to take care of his family. “I don’t have the time to think about politics or act politically,” he told Al-Monitor on May 28. “But two AKP [Justice and Development Party] women deputies came to talk to us. I don’t even remember their names. We talked to Selahattin Demirtas, [pro-Kurdish Peace and Democracy Party co-chairman]. He told us he would personally talk to the PKK and that things could change in the next 10 days. We will now discuss among the family members what to do about our protest — whether to continue or end it.”

On May 29, Ahmet Gunduz told Al-Monitor that they had decided to continue with their protest “for another three days.” He explained his decision, expressing concern that the family had not been given any guarantees as to when their children could be back: “I have no clue till this moment where my daughter is. I don’t know whether she is within the Turkish territories or taken outside the country,” he said. “Demirtas did not give a clear promise that he would be able to bring them back. What happens if the kids do not come back — let’s say in 10 days, and we find ourselves quitting our stand for no real reason? Who would take us seriously then? All we want is our children and peace.”

Esad Bozkaya agrees. “My son Murat was kidnapped in Bitlis on March 8. He is 17 years old. I want to appeal now to your hearts. Listen, there is no difference between a kid who is kidnapped at 15 or 17 years of age. These are still very young people, and I don’t want my son to join this endless fighting and lose his life in the mountains,” he told Al-Monitor. “We are talking about a straight honor student at school. He scored more than 430 points in the first part of the university exam [out of 500]. How could anyone think that he had given up from all of that, all of his dreams of what he can be, and decided to join the armed struggle? It does not make any sense, does it?”

Firat’s father, Selami, concurs that they should not focus all their bets in the age issue. “The PKK side argues that they did not kidnap our children, but that they joined them with their own free will. Look, when a girl escapes to the man she loves in these lands, we define it as kidnapping. Why? Because the family has not given consent for their marriage. This is no different. We as the parents have not given any consent and the PKK needs to hear our voice and return our children back to us — safely!”

Despite remaining silent on Sinan Bockum’s case, Turkish Prime Minister Recep Tayyip Erdogan threw his political standing behind these families. Speaking at his regularly scheduled parliamentary group meeting on May 27, Erdogan first took on the media, questioning the newsrooms’ understanding of what makes news at a time coinciding with the anniversary of the Gezi Park protests of last year. “Where in the world are you, the international media?” Erdogan exclaimed, criticizing the lack of coverage of PKK kidnappings of the minors. “But if there were to be people gathering in front of the Galatasaray University [close to Gezi Park in Taksim, Istanbul], you would have reported it in its entirety. If that is the case, how could you ignore these mothers whose children are kidnapped by the PKK? I should keep some out from this list, but where are the Turkish media’s reporting on this case? Why are you not covering this news?”

Erdogan also warned that the state is ready to move to alternative plans if these children cannot be brought back through negotiation channels. Although it is not clear what that exactly means, or whether this entails potential military engagement, the kidnapped children’s families speaking to Al-Monitor stress that the peace process should not end, even as they express total desperation regarding the cost both in blood and treasure of the three-decade-long fighting between the military and the PKK. Yet, the blame game between the Erdogan government and the Kurdish parties is at full speed, providing no constructive exit from the current impasse.

Ozgur Gundem, a pro-Kurdish daily, for example, announced on its front page on May 29 that it was Erdogan’s fault that these children were kidnapped. “Take the step so that they can be returned,” the front page headline read, painting Erdogan as a murderer and the one who bears the ultimate responsibility of the December 2011 Roboski incident where a Turkish military airstrike based on flawed intelligence led to the deaths of 34 civilian Kurdish citizens.

While Erdogan accuses the Peace and Democracy Party (BDP) and the People’s Democracy Party (HDP) for “not moving a muscle” to help these families, the daily writes, “After ending the lives of so many Kurdish children, Erdogan is now trying to present an image of a person 'loving children.' The families, however, demand that Erdogan come up with concrete plans on how to resolve the Kurdish issue. There is no need for him to come up with ideas about coming up with a B or C alternative.”

Erdogan said May 27, “I am asking the BDP and the HDP, where are you? There has been times when you went to the PKK, and brought back other kidnapped people [taken by the PKK.] Why don’t you do the same for these children? Go and bring back these children, too. You will either do this or our plans B and C will come into force.”

For the families who decided not to end their protest for an additional three days, hoping that they could reunite with their children in this time frame, the peace process might as well put into a freezer until these children are found. Its future prospects also remains in limbo in this political environment. If there is any good in this tragedy, though, it is that Turks across the country raise their voices in goodwill for these Kurdish families to have a good outcome, and praise them for their courage in standing against the PKK and demanding their children back. Until now, though, many ordinary citizens had been confused about the silence of the Kurdish families at a time when their children were taken away from them without their consent. Now, people unite over their human feelings, for the love of their children.