From child bride to mayor, Berivan Kilic tells her story

After an abusive marriage and a divorce, Berivan Kilic became the first woman elected co-mayor of Kocakoy, Diyarbakir, stepping forward as a role model for Kurdish women. 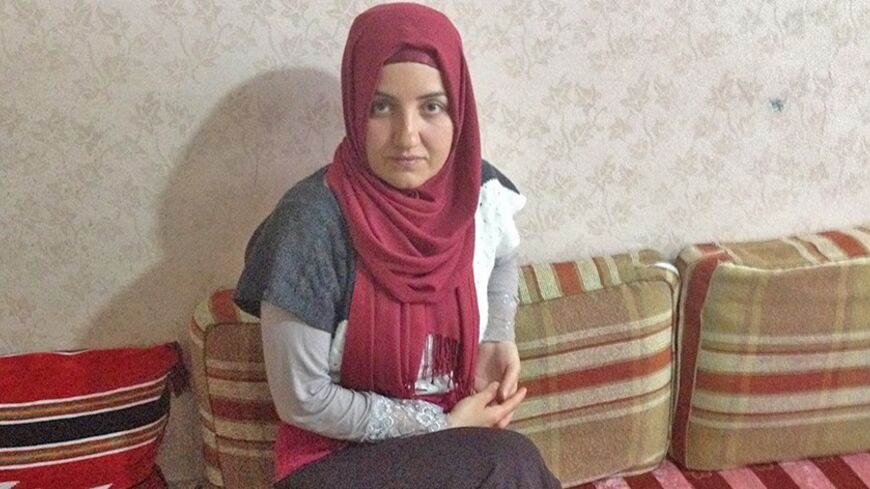 Berivan Kilic is the first woman to hold an elected office in local government in Kocakoy, Diyarbakir, April 13, 2014. - Tulin Daloglu

KOCAKOY, Turkey — A heavy rain fell as the plane landed in Diyarbakir on the morning of April 13. Along the route from the airport to downtown, scrappy concrete construction defied beauty. In contrast, the Diyarbakir-Bingol/Mus highway leading from Diyarbakir to the district of Kocakoy, roughly 55 kilometers (35 miles) from the city center, was surrounded by green fields of wheat and lentil across the Diyarbakir plateau. I arrived in Kocakoy, a district of 17,000 people, to meet Berivan Kilic, the first woman to hold an elected office in the district's local government.

Berivan was waiting for me in front of her single-story home, just two blocks from a mosque. She wore a burgundy head covering, a long, black, partially pleated skirt and a gray, black and white long-sleeve top. Berivan greeted me with the air of a confident yet reserved woman.

“Had it not rained, I would have taken you on foot around the town and maybe even to adjacent villages, but we will have to have our conversation inside, this time,” she said. We sat in her parents’ home, with two rooms, a bathroom and a hallway that served as an open kitchen.

“When I made my decision to divorce my husband, I first told my father. He knew too well that I stayed in that marriage for him for more than enough years, despite all the physical and verbal abuse,” Berivan said with a sigh, lighting a cigarette.

“My dad understood that I was determined. He then had two choices. He would either accept me back under his roof or let me find my way alone with my two sons. The latter promised more trouble, so he chose to go with the first one. I now live with my parents,” Berivan said. Married at age 15, she is now a divorced woman with her sons, Emre, 16, and Furkan, 12.

“When Emre turned 12, he was diagnosed with a genetic disease. He is slowly losing his brain cells, and that makes him weak and bedridden. He can’t walk anymore without assistance. We don’t know whether Furkan will have the same fate. This all happened because I got married to my cousin, my aunt’s son,” Berivan said.

“Mine was an arranged marriage. There were two other families asking for me, but I thought my cousin would be a safer bet and that he would take good care of me. For the entire 14 years I was married to him, he proved my judgment desperately wrong.”

Berivan also told Al-Monitor details of her early life and the problems her family confronted. “I was born here in Kocakoy,” she began. “My father was accused in 1991 of being a member of the Kurdistan Workers Party [PKK]. He was held in Diyarbakir prison for about six months and was released due to lack of evidence. Yet, he was working for the state-owned Turkish Electricity Distribution Co. We were first sent into exile in Yozgat, and then he was assigned to Siverek. My dad had to withdraw me from school [at age 11], because there were lots of incidents between the military and the PKK. It was not a safe environment for anyone. We used to live with our doors locked and windows closed regardless of how hot it was in the summertime. There were numerous stories that the security officers had kidnapped Kurds [affiliated with the PKK] from their beds. So I have no hard feelings for my dad. I knew he did the right thing to protect me.”

Suppressing her desire for a proper education, Berivan turned to housekeeping and got carried away with dreams of being a mother at an early age and raising a family.

“Look,” she said, “I really don’t understand why people treat me as if I am an alien. It was natural for us here to get married at 15 and give birth as early as that age. I would not characterize us [Kurds] as a primarily conservative society, but there is an incredible amount of [societal] pressure. We care too much about how others judge or talk about us. And that is the key dilemma,” Berivan asserted.

“Divorce is a shameful act for us. It’s totally out of the question. There were even people here who questioned my dad about how he could have allowed me back [into his home] with my children. To them, the children should stay with their father. But I got custody of my sons. I am grateful to my parents for standing behind me. … We [Kurdish women] live in our own worlds, with little education, totally dependent on men. We also glorify men. We, as women, are guilty of making them feel as if they’re superhumans or superior to us.”

Berivan was elected co-mayor of Kocakoy on March 30. “I certainly had the approval of my family — both of my parents and my four siblings, one sister and three brothers. I fought for three years to get a divorce, and I did it. I am 33 now.”

“We [in the pro-Kurdish Peace and Democracy Party (BDP)] were elected by receiving the clear majority of the votes here. And I happen to be the first woman to occupy that office. When I campaigned, I visited people’s homes, and opened my heart to them, but I did not promise any specific projects. Still I saw them coming out to support my campaign, and they are now visiting me at the office to congratulate me,” Berivan told Al-Monitor.

“Look, this is how I intend to make a difference — by proving to people that if I can make it, they can make it, too. After the divorce, I finished secondary school and am now taking high school courses. I believe I will get my diploma in two years, and then I will definitely attend a university. I will lead by example, by showing people how one can change her fate and that we are not destined to live a life that deprives us of our dignity and happiness,” she said.

Berivan’s experience is not unique in this country. While child marriage is more common in the predominantly Kurdish areas, it is widespread. The same holds true for domestic violence, which can be found at all income levels and among every ethic and religious group.

Sengul Hablemitoglu, dean of the faculty of health sciences and social services at Ankara University told Al-Monitor, “One out of every three marriages in our country involves [girls] under 17 years of age. That is to say, 33% of the marriages in this country are child marriages.” Hablemitoglu further explained, “According to our laws, it is not legally possible without the consent of the parents to marry before [turning 18]. However, families give consent to marry their girls at early ages, and they tie the knot in religious marriage ceremonies. These kids then lose their self-esteem, their self-confidence and accept all sorts of physical and verbal abuse as the norm.”

Oddly enough, Berivan shares her mayoral seat with Abdullah Kar, a fellow BDP member and an imam. He declined to answer questions from Al-Monitor about imams’ role in executing marriages with child brides. After all, if the imams acted in accord with the law and refused to carry out these religious contracts, the mosques would not be implicated in this illegal practice.

One of Berivan’s neighbors, who asked to remain anonymous, told Al-Monitor, “This is a feudal society, where men dominate everything and are accustomed to ruling. What Berivan symbolizes is a hope, an inspiration, but her election to office can’t fix these problems all at once.”

One Kocakoy resident, Firat Kilic, agreed. “Men have also changed here. They don’t want their daughters to experience the same things [as their mothers, wives and sisters], and go through the same pains. Our hearts softened. Love changes it all,” he told Al-Monitor.

Huseyin Yildiz, who was elected mukhtar for the first time in March, expressed a similar sentiment though with some reservation. “Child marriage has started to drop in number, but it is still there. We also have families who suffer from domestic violence. We can’t claim it doesn’t exist, but people started to distance themselves from such conduct. That is what matters.”

This is what Berivan counts on. “We still value the words of our elders here. One of my projects is to rally those elders in our society to be more vocal and engage in times of crisis with [troubled] families. I am going to help provide family counseling, where we will have psychologists also talk to the men. Until now, we all focused on the women. Without engaging the men in these therapies, however, we can’t advance,” Berivan told Al-Monitor.

“It is also time we start openly discussing the core reasons as to why girls find themselves desperate enough to marry at 14 or 15 years old. Change will come in time, but I took a step forward to make a difference. I hope people all across the country will come and hold our hands for moving forward, breaking the chain of this vicious cycle of desperation.” Berivan’s eyes sparkled as she talked of opening up new opportunities for earning income for the women of her town. “Cemil Ipekci is a well-known fashion designer who helped women in Mardin. I will be thrilled if he comes to our town with a similar project in mind.”

Berivan added, “Women across Turkey may experience similar hardships, but ours is different. We are put down as Kurds. We paid a price for rebelling against the state. We suffered from poverty, and we have also gone through the worst abuse in our homes from our husbands. We try to tear down too many layers of victimhood. And they tell us that we live in the millennium age.”

Looking at her younger son, the new co-mayor-elect says, “I divorced my husband because I realized that I was harming them by staying married. I stepped into politics, because I am sincerely worried about what kind of a world we’re leaving our children. There is too much violence and inexplicable crimes. We should all try to do better for our children.”