Syrian refugee girls in Jordan are being forced to get married at a young age, either to escape sexual violence that is widely spread in refugee camps or to ease the financial troubles of their families. 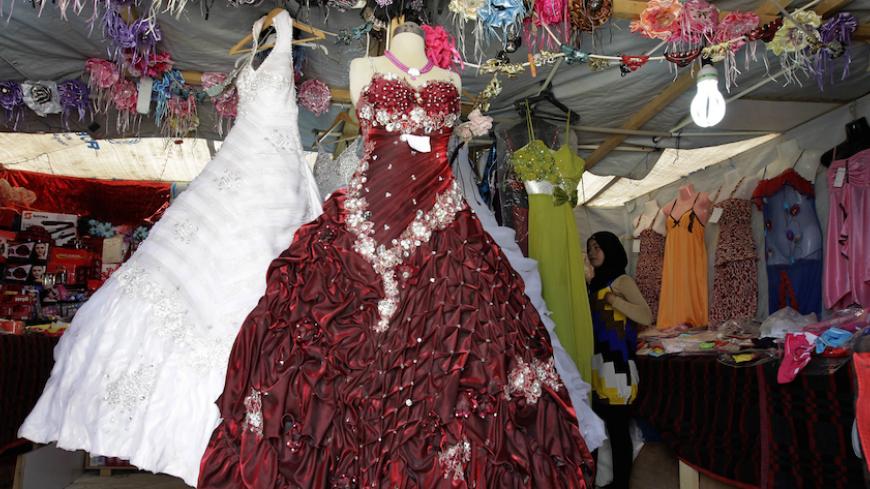 Wedding dresses are displayed in a covered stall in the northern Jordanian Zaatari refugee camp, May 18, 2013. - KHALIL MAZRAAWI/AFP/Getty Images

MAFRAQ, Jordan — Her first husband was a 46-year-old man from Saudi Arabia who already had two wives. Once every few months, he traveled to Jordan for business, and during these visits he would talk to Fatima's aunt about marrying another woman. Her aunt told him she had a suitable candidate in mind: her young niece. Initially, the girl's father didn’t want his daughter to get married at such a young age, but when he found out that the Saudi man was wealthy and religious, he changed his mind.

It wasn’t really up to the bride-to-be to decide whether she wanted to marry this man. As the eldest daughter still living with her parents, she felt like a burden to them. The family had fled Homs to Jordan in 2013 because of the Syrian war, and their financial problems were piling up. Therefore, during the 2014 wedding ceremony, when the sheikh asked her whether she wanted to marry the Saudi, she agreed, hoping for a better future. Fatima was only 14 years old.

From the garden of the Jordanian Women's Union in Mafraq province, she told Al-Monitor about the dreams she'd once had when she still lived in Syria. Fatima, now 15, had fantasized about marrying a handsome, sweet young man like the ones she saw in Hollywood movies, after finishing her education. But her future turned out to be completely different.

"After eight days of living with him in an apartment in Mafraq, he brought me back to my father, saying that he would go to his other wives in Saudi Arabia to spend time with them,'' she said, adding, "But he never came back and acted arrogant when I called him. After three months, I told him I wanted a divorce."

Her ex-husband sent $1,000 to Fatima’s family, an amount he had agreed to give them if he ever divorced her. She has not heard from him since.

For many Syrians in Jordan’s urban areas and refugee camps, marrying off girls at a young age is a desperate attempt to ease the financial burden on families who have little or no income and are trapped in a vicious cycle of poverty. Other common reasons for child marriage in Jordan are the protection of young girls — especially in the refugee camps, where girls are at risk of sexual violence — and tradition, as girls in some parts of Syria often marry at a young age.

Umm Ashraf from the Jordanian Women's Union said that marriages among Syrian girls younger than 18 are increasingly common in Jordan. “The situation for Syrians becomes harder every day," she said, speaking to Al-Monitor from her office. “Families think that marriage is the best option for girls growing up as a refugee, as their husbands promise to take care of the girls financially."

For many teenage Syrian refugee girls in Jordan, school is just a distant memory. Fatima dropped out of school when she was 12 years old, because in Syria it was impossible for her to attend classes while constantly fleeing from one city to another.

"Personally, I never expected that I would get married at such a young age, because in my surroundings it was weird to get married before turning 18. Really weird,” she said with a soft and insecure voice — the voice of a teenage girl.

Soon after Fatima divorced her first husband, a Jordanian man showed interest in her. He was 34 years old with five children with his first wife, and had also married and divorced a widow. At the request of her family, Fatima married for the second time in a few months.

"We spent one night together. I slept with him and then he told me to go back to my mother. After that, he called my father and told him he wanted to divorce me."

Fatima’s dark eyes, left visible by a black niqab, look sad. Her shoulders are bent, as if she wants to make herself as small as possible. She said she decided to cover her face when she was working in the agricultural fields in Jordan (her father isn’t able to work due to physical problems).

“Men were always staring at me when I was working in the fields. I felt so uncomfortable," she said.

After the second divorce, Fatima’s family received no money. Although her Jordanian ex-husband agreed on the "separation amount" before the marriage, he refused to pay it.

However, Fatima didn’t care much about the money, as she had bigger problems to deal with. A month after the divorce, she found out she was pregnant. In consultation with one of her sisters, who lives in Lebanon, she decided to get an abortion by taking illegal pills, without informing her parents.

At home, the family does not even talk about her failed marriages — it's as if they never happened.

"I had a Syrian friend with whom I talked about everything, but she doesn’t live here anymore," Fatima said, adding that her father has been really nice to her since all this happened, as if he feels guilty because he pressured her to get married twice. Her mother, however, has been acting strangely to her ever since. Sometimes she snaps at Fatima for no particular reason.

“I feel so alone and depressed, like my life is over. And I never want to get married ever again, that's for sure," she said.

When asked about what happened to her Syrian friend, Fatima said she married a Kuwaiti man and left Jordan.

“I haven’t spoken to her for a long time, but I hope she is happy," she said.