Divorcees in Gaza face social marginalization when they refuse to relinquish their children to fathers they deem unfit to raise them. 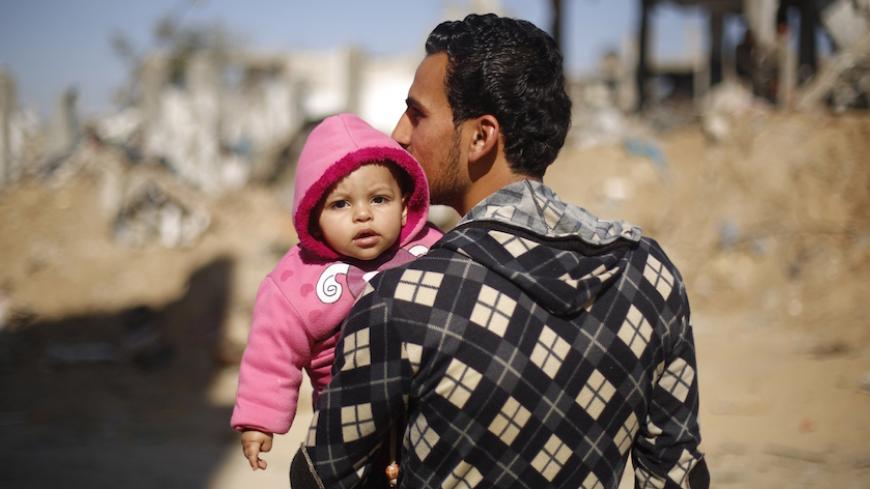 A Palestinian man carries his child in Gaza City's Shajaiya neighborhood next to buildings destroyed during the 50-day war between Israel and Hamas militants in the summer of 2014, Feb. 26, 2015. - MOHAMMED ABED/AFP/Getty Images

GAZA CITY, Gaza Strip — On March 17, Jordanian authorities arrested Rola al-Amin, a Jordanian-Palestinian Al Jazeera English reporter, after she claimed custody of her 5-year-old daughter. Her arrest attracted media attention and generated solidarity among Palestinian women, who took to social media platforms not because Amin's detention was unprecedented or simply because they too are women and mothers, but because her arrest reflects the reality of Palestinian women whose cries demanding custody of their children are ignored.

Sahar (a pseudonym) and her husband fought constantly in their home east of Gaza City, so he divorced her. According to the law, a husband can divorce his wife simply by verbally expressing his wish to do so, and it does not matter whether he does it in his wife's presence or in her absence. The couple then heads to the Sharia court, where jurists try to reconcile the two parties. If that fails, the divorce becomes final and is recorded with the legal system.

After Sahar's divorce, she constructed a shelter from cloth and old wood near the rubble of her concrete home, which had been bombed at the time of the ground invasion during the war with Israel last summer. She lives in this small room with her seven children as she tries to keep custody of them. Meanwhile, Sahar's ex-husband and father of her children built a tin house, a few meters from Sahar’s makeshift home. He lives there with his new wife, who had lived in their home before the bombing. Sahar’s current problem is that she is afraid to claim her divorce papers from the court for fear of losing her children to her husband, who had left her years before the divorce, forcing her to raise them alone.

“My husband refuses to register the divorce in court, so he wouldn’t have to take care of the children or pay alimony, since he would be immediately granted custody by virtue of the law,” Sahar told Al-Monitor. “He does not want custody because he does not want to spend money on the children. However, at the same time, he threatens to take my children if I ever resort to the court and claim legal custody, because he knows once I get it, I would ask for alimony, which he refuses to do under the pretext of going through difficult economic problems.” To take care of her children and cover financial costs, Sahar has had to take several jobs at civil associations.

Sahir al-Baba, a lawyer at the Women's Affairs Center in Gaza, told Al-Monitor, “According to Palestinian law, the custody of girls under 9 years old and boys under 7 years old is granted to the mother. After that, custody becomes the father’s legitimate right.” She said, “Some women take such issues to court, so that children stay with them after the legal age at which the mother’s custody ends. However, according to the law, the mother's custody may be extended for only two years, as most of the judges in the Sharia courts generally rule in favor of the father, although sometimes it would be better for the children to remain in their mother’s custody.”

Baba added, “There is no legal provision that gives a divorced mother the right to custody after her children reach the legal age at which their custody is granted to the father. This requires legal amendments. However, widows are allowed custody for an open-ended period of time until they remarry.”

Hassan al-Jojo, head of Gaza's Supreme Religious Court, told Al-Monitor, “We must re-evaluate the custody law in favor of women who get divorced and never remarry so they can raise their children once older than the legal age when custody is hers. The case of such divorced women should be comparable to the one of widows who are granted custody.”

Many women turn to the Women's Affairs Center, where the legal department takes on custody cases, especially for women who cannot afford the costs of presenting their cases in court. Umm Mohammad, 40, approached the center to claim custody of her girls, who are past the legal age at which they are allowed to stay with her, after their father had filed for custody. She does not trust him to raise them. Umm Mohammad presented evidence that he is an unfit guardian, but she lost the case.

“I cannot trust that he would raise them well. He got married and left them for years, with no alimony, under the pretext of unemployment, as if they were not his daughters anymore. I brought them up, and I educated them. Now he will control their lives and marriages. He does not have a suitable home. He lives in a small house north of the Gaza Strip and away from universities and places of work. He might also force them to work and spend money on himself and his new wife,” Umm Mohammad told Al-Monitor. “The lawyers at the center told me from the beginning that there was little hope of winning such a case.”

Umm Mohammad's case shows how fathers use their custody rights against divorcees. Umm Mohammad added, “After their father was granted custody, my daughters remained under my roof and care, just like before he got custody of them. He wanted to win the case for one reason only, which is not to pay alimony. He has not asked for the implementation of the ruling yet, but I fear that soon he will.”

“Had I won custody, I would have been able to resort to courts again on the alimony issue and would have won the case. I keep looking for jobs to make money and provide for our needs,” Umm Mohammad said.

Al-Monitor asked Sheikh Jojo why courts rule in favor of the father in such cases. “In this case, the mother can appeal against the ruling. But of course, she fears the father will implement the ruling and take custody of her children since it was granted to him by law,” he said.

Umm Mohammad has thought about filing an appeal, but she fears the potential consequences, saying, “I’m afraid if I were to lodge an appeal, he would implement the court’s ruling since I refused to make financial concessions.”

In Palestinian society, divorced women suffer a great deal to keep their children. Their parents often try to deny them the right, especially if they do not work or own a home after the divorce. The families believe the children are the father’s responsibility, even if he is incapable of raising them properly. This is why Sahar initially hid her divorce from her parents. They soon learned the truth, however, and that led to another problem.

“After I refused to return to my family’s home, my brothers called the police to come pick me up and leave my children with my husband. They cannot accept the idea of me being divorced and being still responsible for my children. But relatives of my ex-husband stood by me so I could stay with my children and raise them. After that, I never heard from my family again. They refuse to be responsible for me or my children,” she said.

Sahar, Umm Mohammad and many other women in Gaza are economically, legally and socially marginalized because they have decided to fight to keep their children. For now, they see little hope of change.