Christian women in Jordan are at the mercy of Shariah courts over child custody when their husbands convert to Islam. 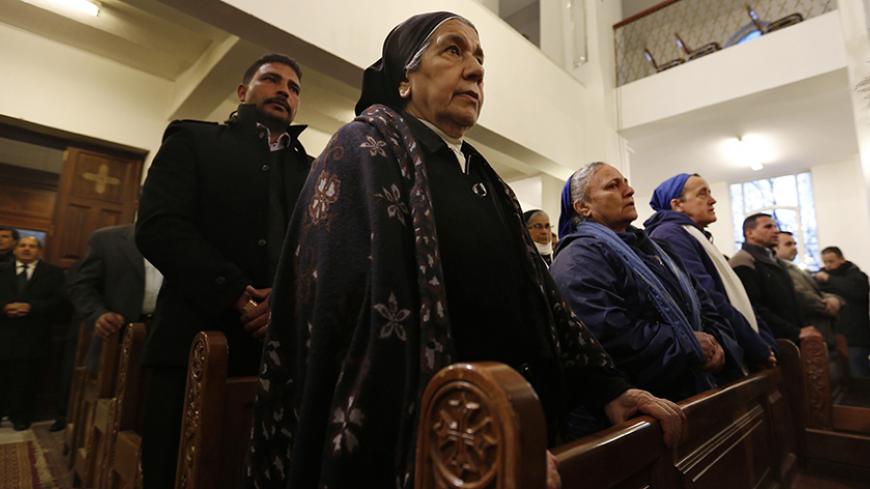 AMMAN, Jordan — After years of marital disputes, Mary learned that her Christian husband, Michael, had filed for divorce. Mary was surprised when at the same time, he announced his conversion to Islam. It was a calculated decision. According to Article 172 of Jordan’s Personal Status Law, a Muslim father automatically gets custody of children ages seven and above when divorcing a Christian woman. Mary (not her real name) told Al-Monitor that her three children, ages 7, 14 and 16, currently live with her ex-husband and she cannot raise them because she is Christian.

A Nov. 16 investigative article by veteran journalist Nadine Nimri for the online magazine 7iber triggered public debate in Jordan about the plight of Christian women whose husbands convert to Islam before divorcing them for the specific purpose of obtaining guardianship of their children and side-stepping church courts’ jurisdiction.

“The law should deal with all citizens as equals,” Nimri told Al-Monitor. “[The Jordanian courts] just assume that the best interests of the child are to be with his Muslim father. This is another form of discrimination.” Unlike Christian women, Muslim mothers are provided the option of guardianship of their children above the age of seven in cases of divorce. Approximately 180,000 Christians live in the Hashemite Kingdom, which is more than 95% Muslim.

While a man who converts to Islam and divorces his wife is easily able to remarry, a Christian divorcee seldom has the same freedom. The Jordanian Catholic courts rarely recognize divorces conducted by Shariah court judges, in essence keeping Christian women chained in a marriage that no longer exists. Only when Mary switched from Catholicism to Greek Orthodoxy did a church judge finally grant her a divorce in 2015, two years after her husband divorced her in a Shariah court.

Some Jordanian analysts see the injustice of such situations as stemming from a much larger problem. On Nov. 21, Al-Ghad columnist Ibrahim Gharaibeh wrote, “The issue is simply caused by the lack of a civil law that applies to all citizens regardless of their religion, guaranteeing them their rights and freedoms promised by the constitution.”

Christian women whose husbands convert to Islam face additional discrimination beyond child custody. Since only Muslims can receive financial inheritance from other Muslims, according to Article 281 of Jordan’s Personal Status Law, a Christian wife and children face challenging economic conditions after the death of a husband or father. All Christian family members are forbidden to inherit from Muslim relatives.

Once the husband has converted to Islam, he is prohibited from returning to Christianity even if he regrets the decision. Sheikh Ashraf Omari, director of Mediation and Family Reconciliation at Jordan’s Shariah court, explained simply, “It is not acceptable to convert from Islam to Christianity. This is a recognized opinion among all Islamic religious intellectuals.”

The sheikh also said that a Muslim father has the right to overrule a Christian mother’s objection to changing the religion of their child from Christianity to Islam if the child is under age seven. When Al-Monitor asked why the Muslim father’s wishes held more weight than the Christian parent, Omari defended the policy, stating, “Islam believes in all of the previous prophets, including Jesus and Moses, but Christians don’t believe in the Muslim Prophet Muhammad.”

Exemplifying the extreme distrust between Christian and Muslim clerics, Father Ibrahim Dabbour of the Greek Orthodox Church in Jordan told Al-Monitor that the Shariah court judge was “lying” when he said a Muslim father can only change his children’s religion if they are under the age of seven. “After a man converts to Islam, the government here obliges his children under 18 to become Muslim,” Dabbour said.

Similar to Mary's situation, Sarah’s husband announced his conversion from Christianity to Islam in April 2015, when he filed for divorce. Sarah is most worried about the fate of her 3-year-old son. Her lawyer told her that her ex-husband will automatically gain custody of the boy when he turns 7 because Sarah is Christian. In an interview at Sarah’s home, she expressed her frustration to Al-Monitor: “I just want my child to stay with me [like they do with] Muslim women. They are mothers, and we Christians are not mothers? We are the same,” she said.

A divorced Christian woman who converts to Islam can gain custody rights over the children and also be eligible for an inheritance from her husband. The Christian women interviewed, however, emphasized that their religion was an integral part of their identity and culture. Mary and Sarah therefore feel it is unjust to force them to renounce their Christian faith to acquire basic rights, which should instead be guaranteed by the government for all citizens.

Sarah added that as a woman, her personal safety would be at risk were she to leave the church. In a society where family honor is critical, Sarah said, relatives might threaten her life for abandoning the community.

Jordanian leaders, including Prime Minister Abdullah Ensour, repeatedly praise the Hashemite Kingdom’s “tolerance” toward Christians and religious freedoms in the country. Custody and inheritance laws that discriminate against Christian women and children make one wonder if Ensour’s comments are directed toward Western audiences rather than the 180,000 Christian citizens of Jordan.