While divorced women in Egypt face significant financial difficulties, some have argued that proposed changes to laws violate Islamic law. 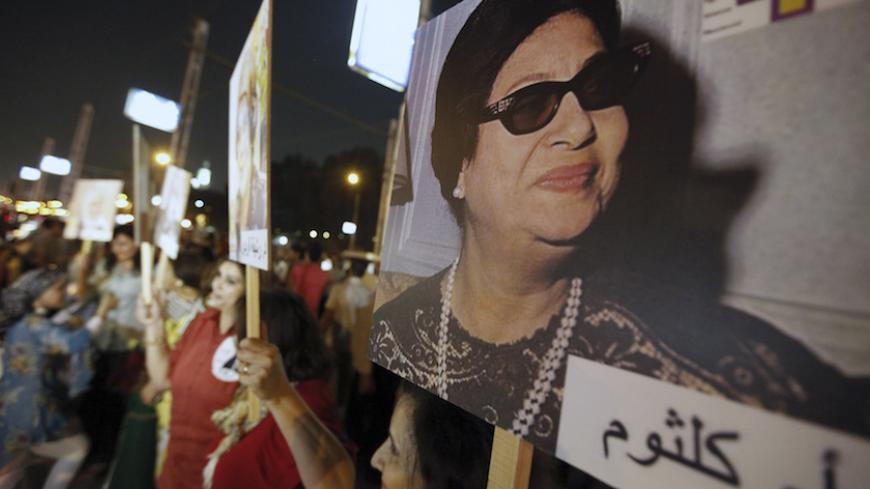 Egyptian women carry a picture of late Egyptian singer Oum Kalthoum during a protest supporting women's rights in the constitution, in front of the presidential palace in Cairo, Oct. 4, 2012. - REUTERS/Amr Abdallah Dalsh

For more than two years, Sabah, an Egyptian woman in her 40s, has been trying to obtain proof of her ex-husband’s monthly income so the Family Court in Giza governorate will require him to provide her a monthly payment that ensures a decent standard of living for their three daughters. Sabah, who didn’t want her last name published, said that her ex-husband divorced her several years ago and married another woman because he wanted to have sons.

She told Al-Monitor her husband is a state employee with the Ministry of Education for which he receives a monthly salary of 1,700 Egyptian pounds ($191), but he also has been involved in trade ventures for 16 years that bring in more than 20,000 pounds ($2,252) a month. Sabah told Al-Monitor that she can’t obtain proof of his full monthly income, because he never registered his trade activities with the commercial registry. She fears that, if the courts rely only on his state salary, her monthly alimony will only amount to around 850 pounds ($96) — an amount she says is much too low to provide a decent life for her girls.

Sabah, like thousands of other divorced women in Egypt, faces significant difficulties due to the Personal Status Law, which requires divorced women wait at least one year from the date of filing for alimony to receive payment. In addition, the court’s procedures to determine the husband’s income often take a long time, and women frequently complain that the court relies on an income less than the actual amount due to efforts by the husband to hide his true earnings.

According to Article 76 of Egypt’s Personal Status Law, a divorced woman shall receive 25% of her husband’s monthly income in alimony if they have no children. If they have one or two children, this rises to 40%, and if they have more than two, it is 50%.

Earlier this year, the Center for Egyptian Women’s Legal Assistance (CEWLA) proposed an amendment to the Personal Status Law that involved a husband and wife splitting assets after the divorce, defining their holdings as “joint wealth.” As part of this proposal, a divorced woman could choose to either receive a monthly payment from her husband or take part of his share of the split assets.

CEWLA Director Azza Soliman told Al-Monitor that Egyptian family matters are still regulated by laws from 1920 that, in her view, are unfair to all, including men. She stressed that adopting the principle of “joint wealth” is necessary, after woman have been faced with no source of income when yearslong marriages come to an end.

Soliman said that the proposal involves wealth acquired by the husband or wife during the marriage and not assets held by either prior. She noted that in the case of homemakers, it allows for the wife to be compensated for housework that allowed her husband to work and make money. However, if the proposal is ratified, a divorced woman will be able to request division of death or her standard rights under Islamic law, not both.

Soliman noted that she has dealt with cases where women are enduring difficult marriages and fear filing for divorce, since they know it could take years to receive a ruling for alimony.

Amina Naseer, a professor of religion at Al-Azhar University and a member of parliament, said that a housewife could be entitled to a share of wealth acquired by the husband over many years, since her role at home allowed the spouse to work and kept him from being occupied with family matters.

“The [proposal] does not violate Islamic law,” Nasser told Al-Monitor, noting that if a divorced woman is not compensated for unpaid housework this would violate the Islamic law principle of “there should be neither harming nor reciprocating harm.” Nasser pointed to a Quranic verse on divorce — “either keep [her] in an acceptable manner or release [her] with good treatment” — as evidence that splitting joint wealth was the fair thing to do. She said that the proposal ensures divorced women will not become homeless after leaving the marital home.

Naseer said the proposal would only apply in cases where the wife is a homemaker, not if she is employed elsewhere and receiving a salary. She said she supports the proposal and will defend it if brought before parliament.

On the other hand, Ahmed Karima, a professor of Islamic jurisprudence at Al-Azhar University, said the law is blindly imitating Western societies. Speaking to Al-Monitor, he said that a proper marriage contract in Islam specifies the woman’s rights, including the right to have custody of the children and obliging the father to support them. Karima said that, in an Islamic marriage contract, the husband must provide for his ex-wife throughout the iddah — a period of waiting a woman must observe before remarrying after divorce — and he must provide for the children until they are adults.

Karima said Islamic law is clear in this regard and there is no room for interpretation or adjustment. According to him, the current Personal Status Law safeguards family bonds.

He expressed his view that demands to divide assets between the husband and wife reflect a lack of awareness of Islamic law on the part of those making the proposal. Karima claimed the law would eliminate the “family-friendly nature” of Middle Eastern society, transforming Egyptian family life into a materialistic replica of Western families. He predicted that many men will resort to informal “urfi” marriage if the proposed change becomes law.

While Soliman stressed that she has respect for all the schools of Islamic jurisprudence, she said they do not fully align with the numerous changes witnessed recently in Egyptian society. “When these schools were formulated, women didn’t suffer as much as they do today,” she said.

“Those who oppose the proposed changes, claiming they violate Islamic law, have their heads lost in [religious books],” Soliman added, stressing that religious men must realize society has changed, pointing out that there are now women who work outside the home and serve as breadwinners for the family, men who abandon their families without providing support and women who face ongoing domestic violence because they have nowhere to go if they leave their husbands. She called on the religious institutions in Egypt to develop solutions to these pressing social problems before they start talking about violations of Islamic law.

Soliman stressed that a family based on clear rights and obligations for both husband and wife is the basis for a stable society, adding that the marriage system in Egypt not only needs a modification of laws but also a modification of societal understandings. In her view, this proposal is merely a step to treat diseases afflicting family life in Egypt.