Forced marriages of teenage Palestinian girls in Gaza remain frequent, despite laws prohibiting the marriage of those under 17. 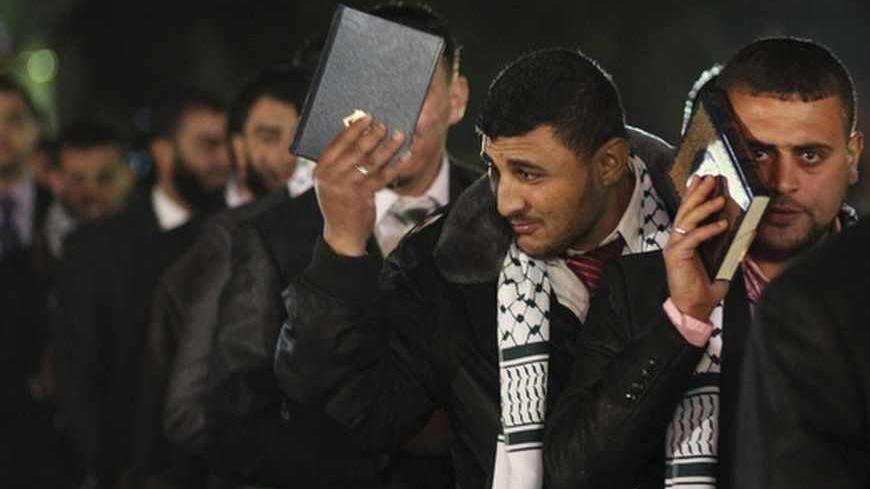 Palestinian grooms hold copies of the Quran during a mass wedding for 500 couples, funded by a local charitable organization and in coordination with Hamas, in Gaza City, March 8, 2012. - REUTERS/ Suhaib Salem

Sitting alone in her gloomy room, 17-year-old Mariam recalled the year and a half she spent at the house of her husband, whom she was forced to marry when she was 15 to escape poverty.

As Mariam gazed at the small doll in her hands, suddenly her mind was flooded with memories in which she was continuously beaten and verbally abused in the house of her husband. Her father’s voice, however, interrupted this chain of memories.

“Mariam!” he shouted. She rushed to answer him.

He told her, firmly, “You should return to your husband’s house no matter what he did to you. You should learn to accept this. Do you understand?!”

As she spoke to Al-Monitor, Mariam, a girl with flawless olive skin, described this scene in her own sad words, giving details of the bitter experience of her marriage to a 37-year-old man. Her father forced her to marry him after he became unable to meet her basic living needs and educational requirements.

In 2012, of about 17,000 marriages were registered in the courts of the Gaza Strip, 35% were cases in which the brides were under 17 years old. These marriages are concluded without the courts knowing the girls’ real ages. Meanwhile, about 2,700 divorce cases were registered in the same year, and in 25% of these the wives were underage, Bakr Azzam, a lawyer specializing in Sharia issues, told Al-Monitor.

Mariam explained that due to her young age she wasn’t capable of meeting the demands of married life.

“I was taken away from my small toys, taken out of my school forcibly and delivered to my husband whom I had only seen once, in front of the judge who officiated my marriage contract,” she added.

Mariam recently ran away from her husband’s house and returned to her father's, after concluding that she could not bear to stay with her husband. He dates other women under the excuse that his wife is young and thinks like a child, not living up to the intellect of a man of his age. Mariam’s husband also beats her whenever they have an argument.

“When I told my father about this, he told me, ‘This is normal and most young people are facing such a situation these days,’ but I did not accept it,” she said.

Mariam, who now wants a divorce, is not the only underage girl who was forced to marry despite her physical and mental unreadiness for marital life.

Sarah had a similar experience, but for different reasons.

As she spoke to Al-Monitor, Sarah looked at a photo of herself when she was still single. She had a bright face and childlike features. Today, however, she has become a girl with a scrawny body, a slim face and caved-in eyes that look very tired.

“I got married when I was 16 years old. My father and my brothers forced me to marry a 17-year-old boy so that they would not have to pay my living expenses and could get rid of my father’s accumulated debt,” she said, her face somber.

She pointed out that marital problems began only one week into the marriage due to the demands, made by both her husband and his family, that a girl of her age could not meet. “My family did not take into account the fact that I was still a child,” she said.

Sarah went through a major crisis when she got pregnant. She had to undergo a Caesarean section due to complications during delivery. After four hours of pain and crying, she gave birth to a premature baby boy.

As tears started to fall from her eyes, she added, “I couldn’t take all of this. I ran away from my husband’s house, leaving everything behind. I shouted in front of everyone that I wanted a divorce.”

Two years after her marriage, Sarah finally got her divorce. She is 18 years old now, but never wants to get married again due to this bitter experience, which left her with a fear of married life.

Sociologist Fadel Abu Hein said that there are many reasons that prompt Palestinian families to force their daughters to marry at such an early age. These include poverty, unemployment and a low standard of living, in addition to customs and traditions.

According to a report by the International Labor Organization issued in June 2013, “The number of unemployed Palestinians rose by 15.3% between 2011 and 2012, with the unemployment rate reaching 23%.” The report adds, “The situation is particularly acute in Gaza, where unemployment has reached 31% and is almost 50% amongst women. … 18.4% of young Palestinians were neither in the labor force nor in education, including 31.4% of young women.”

In an interview with Al-Monitor, Abu Hein said, “Girls under 17 years of age are subject to inhumane treatment during marriage. They are forced — perhaps beaten — to accept a marriage that is approved by their fathers, without taking into account their opinion or letting them mature and complete their schooling.”

He explained that most of the poor families that cannot meet the basic needs of their daughters seize the opportunity to make a contract and marry off their underage girls. This rids them of their financial burden, which includes their tuition fees and health expenses.

Abu Hein said that most families in Palestinian society are looking for girls between the ages of 15 and 19 to marry their sons. They believe that young girls are more likely than adult women to adopt the habits of the husband's family.

“What is happening is a fatal error and a threat to society. It destroys the girl and her character,” Abu Hein warned. He pointed out that underage girls are not physically or intellectually ready for marriage, which leads to marital problems and a lack of ability on the girls’ part to meet the domestic and sexual needs of their husbands. This leads to divorce in many cases.

For his part, Azzam said: “The Marriage Law requires girls to be at least 17 years old to be able to marry,” asserting that marriage contracts concluded outside of this law are legally void.

He explained, “The Islamic courts in the Gaza Strip are committed to marrying girls above the legal age, but there are dozens of contracts made in courts either by changing the girl's birth certificate or estimating her age and concluding the wedding contract based on the parents’ testimony.”

The sociologist added that there are other marriage contracts concluded outside the framework of the courts, when the family is faced with dire circumstances and inhumane conditions. In these cases, a cleric officiates the marriage contract for an underage girl after obtaining the permission of the family’s representative. Once the girl reaches the legal age, the marriage is registered in the Sharia Court.

Mariam and Sarah are just two examples of the social and economic problems suffered by Palestinian society. Their story is closely linked to old traditions that do not allow girls the right to decide their fate, and a lack of legal and legislative action to grant them this right. Moreover, there are no regulations that deter a parent from forcing his daughter to marry under the legal age.