Why Gaza's grooms are looking for a career-focused bride 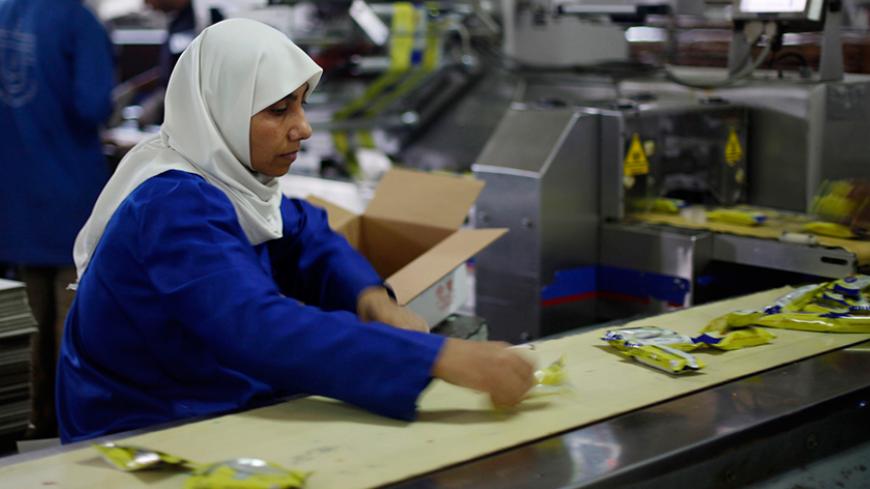 A Palestinian woman works at a factory that produces biscuits and chocolates in Deir el-Balah in the central Gaza Strip, Dec. 4, 2013. - REUTERS/Ibraheem Abu Mustafa

GAZA CITY, Gaza Strip — Three years ago, Jamal Najib would have never considered marrying a girl who was employed. Due to the harsh living conditions in the Gaza Strip, however, Najib had no choice but to change his mind and marry a girl with a job.

“I always thought that marrying a working girl who pays for the family needs would affect both my manliness and our happiness as a married couple, but I eventually realized that due to the current hardships and economic crisis, our life would be quite tough if I marry an unemployed girl,” Najib, 29, whose wedding is scheduled for Dec. 7, told Al-Monitor.

Dardah al-Shaer, professor of social psychology at Al-Aqsa University, told Al-Monitor, “Poverty and unemployment have reached unprecedented levels in Gaza as inflation and the weak purchasing power top the list of reasons that prompt guys to marry working girls in order to adapt to the economic conditions."

Shaer added, “To marry working girls is now being accepted by the Palestinian youth who believe in the importance of having women assume responsibilities and play a role in house management given the worsening economic conditions and life's crises.”

Najib, who majored in accounting and graduated from the Islamic University of Gaza in 2011, was hoping to find a job and start a family, but he only managed to work as an accountant in a private company for five months during the last four years.

Najib said he feels lucky marrying a girl who has a job. “My fiancee works as a nurse for the United Nations Relief and Works Agency for Palestine Refugees, and she earns about $900 per month, which is enough for any Palestinian family — even if the husband is unemployed. This is the livelihood security I am looking for,” he added.

There are four criteria for young Muslims to choose a wife in Islam. The Prophet Muhammad is reported to have said that women may be married for four things: wealth, lineage, beauty or religious commitment. But with the worsening living conditions in the Gaza Strip, another criterion has topped this list, namely employment.

Nidal Abu Khalleh, 24, is also looking for an employed bride who can help him start a family, as he is unemployed himself.

Khalleh told Al-Monitor, “Marrying a working girl was out of the question in the past. My family always considered that work was for men only, but now everyone is encouraging me to marry a working girl.”

He sarcastically added, “When I was a teenager, I dreamt of marrying a very pretty girl and make all of her dreams come true. However, the most important criterion today is for my future wife to be employed in order for her to make my dreams come true. I do not even mind her being older than me."

For her part, Amal Syam, director of the Women's Affairs Center, told Al-Monitor, “This phenomenon has significantly increased during the past four years during which Israeli wars have occurred and the Israeli siege imposed on Gaza has tightened.”

Syam said, “Unemployed men are not the only ones looking for employed girls. Employed men also find such options more appropriate in order to meet the high cost of living. This allows them to be independent from their extended family and settle in their own houses.”

She added, “Although the female proportion in the labor force does not exceed 17%, there is a remarkable improvement in women's participation compared to previous years during which this ratio never got to this level.”

Syam pointed out that the phenomenon of men marrying employed women has forced many girls to major in fields selected by their fathers regardless of the daughters’ will. These fathers believe that their daughters can easily find a job if they major in a field related to the education or health sector, which, in turn, gives them a greater chance to find a husband.

Raida Munir, 26, from Gaza City, is one of those girls. “As a high school student, I would dream of majoring in geology given my passion for the Earth’s layers, but my father forced me to study Arabic so I could teach Arabic in public schools,” she told Al-Monitor.

“My father felt it was important for me to work in order to get a good marriage proposal since I am not particularly beautiful,” she added.

As soon as she graduated, Munir found a job as a teacher in an elementary school west of Gaza City. This made her more appealing to guys looking to get married. “An unemployed guy proposed to me. What made him a good husband, according to my father, is that he owns an apartment, which would spare us the hassle of renting an apartment. Now I am the one who covers the financial expenses of our family.”

According to Shaer, the high unemployment and poverty levels have led to a decline in marriage rates and an increase in divorce rates in Palestinian society.

The year 2014 witnessed a decline in the number of marriage contracts, which amounted to 16,128 in the Gaza Strip, compared to 17,359 in 2013. Also, the highest number of divorce cases was registered in 2014 compared to the past five years, head of the Supreme Islamic Courts Council Hassan al-Joujou said during a press conference on Jan. 28.

The conservative nature of Palestinian society does not allow women to play roles deemed to be the preserve of men, such as providing for the family. However, the harsh living conditions in the Gaza Strip have significantly contributed to getting rid of these beliefs, as people increasingly accept women working outside the house to help their families survive.