Widows in the Gaza Strip, whose numbers keep rising due to the ongoing Israeli-Palestinian conflict, are losing their rights because of their husbands’ families and their own lack of legal knowledge. 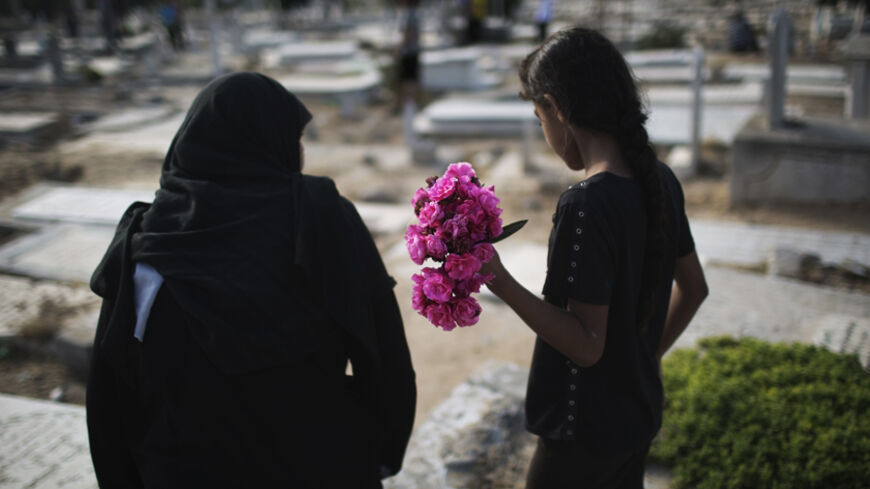 A Palestinian woman and a girl carry flowers to a family grave on Eid al-Fitr at a cemetery in Gaza City, July 28, 2014. - REUTERS/Finbarr O'Reilly

GAZA CITY, Gaza Strip — Wafaa, 24, was happily married until the recent Israeli war on the Gaza Strip took away her husband, when a building in Sheikh Radwan district north of Gaza City was targeted, leaving her and her one-year-old son behind in the face of an unknown future with no security or protection.

“Life was beautiful when I was with my husband, Assim. Although more than two months have passed since his death, I still feel sad and distressed, now that I have to carry on the journey alone, amid many problems and while all eyes are on me,” she told Al-Monitor, asking her last name not to be revealed for privacy reasons.

The Israeli war on Gaza resulted in 2,127 Palestinian deaths including 544 children and 302 women. Although there are no official statistics on the number of widows in the Gaza Strip, they have significantly increased as a result of the war, according to Amal Syam, executive director of the Women's Affairs Center.

Syam told Al-Monitor, “Widows are facing many problems, starting with the fact that they have lost their family's provider and the source of financial income. The women argue with their fathers-in-law about inheritance and monthly pension. The problems do not end here, as they are sometimes forced to marry their brothers-in-law under the pretext of [providing] protection and security.”

Wafaa explained that the problems she is experiencing are related to her husband’s family, which is placing pressure on her to either marry her brother-in-law — who is 20 years older than her and is already married to another woman — or to leave her son with her husband’s family and return to her father's house. She noted that she has few options; she will either lose custody of her son, or marry a man she does not want to.

She said that her husband's family justifies forcing her to marry her brother-in-law because of the protection and security it will give her and her son. Yet, she believes that this marriage is designed to seize the financial assistance that she receives from a charitable association that supports martyrs’ families, which is estimated at 900 Israeli shekels per month ($240).

Maram, 27, lost her husband during the Israeli war on Gaza in 2008. She told Al-Monitor, without giving her last name, “When my husband died, I lost the people’s respect. They started to look down on me, to deprive me of my rights to inherit from him and [receive] the money given to the martyrs’ families.”

Maram, who has one child with her deceased husband, explained that the PLO has offered the families of men who have been killed a monthly payment of nearly 1,000 shekels ($266). However, her husband's family denied her the right to this payment, and is instead giving her around $55 per month.

She said that a year after her husband's death, a man proposed to her. Her husband's family told her that if she agreed to marry him, she would have to waive all her rights and inheritance, and will lose custody of her child.

“This is illegal and is not allowed by the local courts, but when I thought of resorting to these courts, my father-in-law threatened to deprive me of the custody of my child. I was really afraid of this, to the extent that I renounced from filing a lawsuit, refused to marry another man and contented myself with the amount they [the family] allocated me and my child, even though by law I could get so much more,” Maram said.

According to the Palestinian Central Bureau of Statistics in 2013 — in the Gaza Strip and West Bank — 56.9% females aged 15 years and above were married, while 33.2% had never been married and 5.8% were widowed. This last estimate, of course, does not include those who became widows following the recent war on Gaza.

“We have seen some cases where widows accept to marry their brothers-in-law and when they do, their new husbands gradually deprive them of their rights. When their [new husbands] make sure they are deprived of all of their rights, they divorce them,” Syam said.

Omar Nawfal, the president of the Gaza Court of Appeal, referred to fierce disputes over the estate of a deceased between the widow and the father of the deceased. “This is a controversial issue we face a lot due to the increasing number of martyrs in light of the wars in Gaza,” Nawfal said.

He told Al-Monitor that the Palestinian law governs the rights of all inheriting parties, including the widow, who was given fair rights. He added, “However, the widows’ reluctance to resort to the courts causes them to forfeit their rights.”

Nawfal added, “The law provides several rights to widows. The first is the widow’s right to receive the deferred dowry [muakhar] set in the marriage contract, as the latter is fully entitled to claim this dowry from her husband's father, but most widows are not aware of this right. Moreover, the inheritance law specifies that the widow is entitled to one-quarter of the total inheritance. In addition, the widow is entitled to half of her deceased husband's salary [for life]; however, she loses this right when she marries someone else.”

Syam agrees with Nawfal on the lack of a cultural awareness promoting referral to the courts to claim one's rights. “This culture is uncommon among widows who believe this is a departure from the norm, customs and traditions. Very few only possess the courage to go to court to claim their rights,” she said.

She believes the Palestinian law handles the widow’s rights in general terms but not in a specific manner. “The Palestinian law still fails to protect widows from violence and the expropriation of their rights.”

While Maram dreams of managing a specialized center for the defense of widows’ rights, especially as the number of widows continues to rise due to the ongoing Israeli-Palestinian conflict, all that Wafaa hopes for is to raise her child without being forced to marry another man under the pretext of security and protection.