Many Palestinian families strip their daughters of their inheritance rights if they wed outside the family. 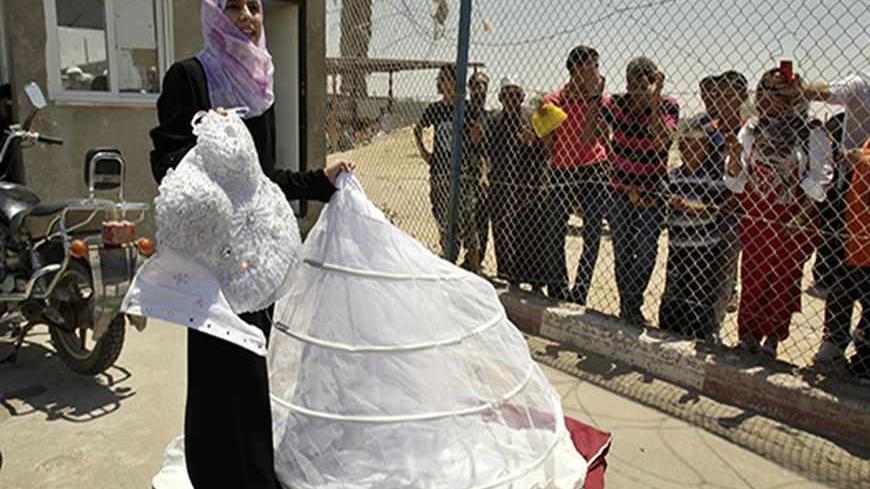 GAZA — “Rejected,” Asmaa’s family responded, when young Ahmed proposed to their daughter. According to Palestinian tradition, which Asmaa’s family has followed for decades, daughters should not marry men from outside the family for fear that the family's property and real estate will be transferred to others. Ahmed does not belong to Asmaa's family.

Ahmed and Asmaa, who did not want to disclose their surnames, are colleagues who majored in construction engineering. They had liked each other since their college days and had been intending to get married since that time. They did not expect, however, that this desire would come to an end or that their hopes of building a married life filled with love and happiness would fail to materialize.

Asmaa cursed her bad luck. She told Al-Monitor, “I belong to a rich family that owns real estate. They fear that these properties will be transferred to other families, so they oppose marrying off their daughters to young men from outside the family.” Asmaa confessed that she had tried to get around her family's objection, with support from her female cousins, but ended up “disappointed.”

Asmaa explained that her family offers any girl who wants to get married two options — marry a family member and retain her rights to property and inheritance or marry a man from outside the family and sign a waiver relinquishing all rights to her inheritance upon the death of her father.

Omar Nawfal, head of the Sharia Court of Appeal, told Al-Monitor that Islam prohibits customs that deny women their inheritance rights. In a case like Asmaa's, a woman can resort to the judiciary following the death of her father, regardless of the husband's family.

Asmaa further revealed, “There is a high probability that I will have a child with a disability if I marry one of my relatives. This is what happened with many of my cousins. They ended up either divorced or their husbands took on a second wife from another family,” she revealed. The disabilities are the result of decades of intermarriage in her family.

“A man from my family can easily marry a girl from outside the family, but we, the girls, are not entitled to marry men from another family. This is sheer injustice,” she added in an indignant and mocking tone.

Nawfal said that women can approach the courts if their fathers refuse to allow them to marry a man for the sake of maintaining the inheritance if the husband is capable of financially looking after his wife. Nawfal stressed that both Sharia and civil law give judges the authority to authorize a marriage and override a father’s objection. Asmaa, however, cannot take that path.

“This does not fit the nature of our customs and traditions in Palestinian society. Girls who resort to the courts face endless family problems, even if they end up marrying the guy they want,” she said. Thus, Asmaa has given up and is waiting to be married to a member of her family.

Nawfal said that by not pursuing their legal rights, women will lose these rights. He stressed that women are entitled to receive their inheritance and are free to use it without referring to anyone, “unless they waive their rights of inheritance.” Nawfal noted that inheritance issues rank third among all cases filed before the judiciary, outnumbered only by issues related to debt and accidents and compensation.

Faten Azzak, a lawyer specializing in cases where women have been denied their inheritance, confirmed that refusing to marry off women to men from a different family stems from a desire to avoid transfering property to other families. It is a common custom among families of all income levels, she asserted.

“This does not mean that there aren’t girls who marry outside the family, but this comes at the expense of their inheritance rights. There are many ways [fathers can] circumvent these rights, such as writing wills, resorting to consensual distribution or granting sons the real estate and land through fake sales,” Azzak told Al-Monitor.

“Most of the women complaining about this do not get any of their inheritance, and they are often forced to sign a paper stating that they received the entirety of their rights,” she added.

Azzak pointed out that about 90% of the women who marry men from outside their family accept only a small portion of their inheritance due to their ignorance of the law or in a bid to avoid problems with their siblings. Furthermore, only 10% of them go to court to have their rights upheld or resort to reconciliation committees to resolve the problem amicably.

Although Palestinian law affords women the right to inheritance, Azzak stressed, “the procedures are slow and entail high financial costs, and so many women abstain from claiming their inheritance.”

Going to court to claim their legal rights is the last thing on women's minds, as they would prefer to avoid a dispute with their brothers. Thus, they turn to the reconciliation committees of the Palestine Scholars Association, which consists of renowned clergy and reformers, to uphold their rights amicably and to maintain family unity.

Sheikh Mohammed al-Husseini, a member of the reconciliation committees, explained in an interview with Al-Monitor that the committees' role is to reconcile the parties’ views in accordance with Islamic principles, adding that their recommendations are not binding for either party. If both sides accept a committee's arbitration, then the courts need only supervise implementation of the recommendations. If one of the parties rejects the recommendations, however, the only choice left would be to file a suit in the formal, judicial courts.

According to Husseini, the committees resolved 582 cases in 2012, with inheritance rights returned amicably. “Very few people agree to allow the reconciliation committees to arbitrate,” he added.

In light of the unjustness of this custom, more Palestinian women are beginning to exhibit courage by claiming their rights in court as a result of institutional attempts to revive legal awareness among women. These women face a few obstacles, however, such as the long period between judicial appointments and the high financial cost, which often prompts them to give up on the process and the pursuit of their rights.