Palestinian widows of men killed in the 2014 Israeli war on the Gaza Strip have told the government they will escalate their protests if they do not receive their monthly benefits. 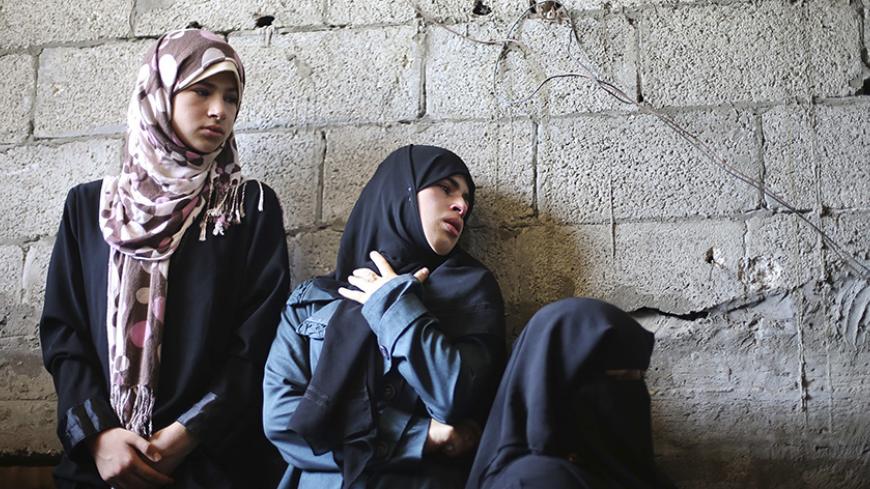 GAZA CITY, Gaza Strip — Families of Palestinians killed in Israel's 2014 war against the Gaza Strip held a sit-in March 7 outside the offices of a PLO-run foundation, the Families of Martyrs and Wounded Support Foundation, in Gaza City. The organizers of the sit-in — the Popular Front for the Liberation of Palestine (PFLP) and the National Committee for Families of Martyrs (NCFM) — demanded that victims' families receive their promised allowances, which they say have not been paid for political reasons.

In July 2016, protesters set up an open-ended protest camp outside the PLO foundation's office. The NCFM warned of even further escalated measures should the leaders continue to ignore them. On Feb. 28, women tried to set themselves on fire during a protest in front of the building.

Al-Monitor attended the March 7 protest, where PFLP leader Osama al-Hage Ahmed said that victims’ families have the right to receive allowances under the 2003 Basic Law, which states that "maintaining the welfare of families of martyrs, prisoners of war, the injured and the disabled is a duty that shall be regulated by law. The National Authority shall guarantee these persons education, health and social insurance.”

Speaking to Al-Monitor on condition of anonymity, a war widow and mother of six said, “Our house was totally destroyed by the shelling. My husband was killed in the 2014 war, and I have no one to provide for my family. We are living off the leftovers of people.”

She said she lives in a caravan that neither blocks heat from the sun nor the winter cold. She is still owed a compensation grant to help her rebuild the house. She said her situation will not be resolved through peaceful protests, and that escalated measures, such as kidnapping leaders and trespassing onto their private property, are required.

Another war widow told Al-Monitor, “I have five children. After my husband was killed in the 2014 war, I was forced to [rent] two of the house’s rooms for $70 a month to make ends meet.”

The 62-year-old widow added, “We will neither get tired of protesting nor of closing the foundation until we get all of our rights, nor will we accept half-solutions.”

Maher al-Badawi, the secretary-general of the NCFM, told Al-Monitor that nearly 2,000 families of victims of the 2014 war have not received allowances. Families are supposed to receive such allowances a month after a death. The PLO foundation is only paying the 32 families that lost both father and mother.

Immediately after the end of the war, Badawi said, protesters gathered weekly to demand allowances. When officials didn't respond to their calls, the protesters set up camp, complete with tents, outside the foundation.

Badawi said that the director of the Families of Martyrs and Wounded Support Foundation, Intissar al-Wazir, has repeatedly promised to pay the allowances, but she has yet to fulfill her promise. Badawi met with Wazir on March 5, but he said the meeting was not reassuring and did not reflect any intention to resolve the issue.

Alaa al-Birawi, the spokesman for the NCFM, told Al-Monitor, “The outcomes of the meeting with Fatah’s Central Committee Feb. 28 have prompted women to set themselves on fire, after the Central Committee suggested paying allowances by installments and over three phases. This, however, was rejected and perceived as a neglect of the Palestinian bloodshed.”

Birawi said the issue of allowances needed to be distanced from the political differences between the Gaza Strip and the West Bank. But he said that the PLO's lack of a presence in Gaza means that it does not represent all Palestinians. Birawi demanded that this leadership, which is misleading the public opinion by using the Palestinian Authority’s (PA) financial crisis as a pretext, be replaced.

Birawi said that while the 2014 war families remain unpaid, other families whose members were killed during periods of truce with Israel are being paid. The stance of the leaders is unjustified, he said, since they say that the 2014 war was not their call.

If the issue is not rapidly resolved, Birawi said that actions might escalate, as the families have nothing left to lose. He said that steps could be taken against anyone who tries to prevent the families from receiving an allowance.

Mohammed al-Nahal, the director of the Gaza office of the Families of Martyrs and Wounded Support Foundation, told Al-Monitor that the foundation is seeking to make the allowances available, but, due to the Palestinian governmental split, no significant developments have been made.

Nahal said that the foundation has secured allowances for families that lost both father and mother, and that the other families have not been paid for political reasons. The presence of a shadow government in Gaza is a major reason behind the problem, he said. “Should the unity government that was formed in 2014 run the Gaza Strip, the crisis would not have emerged.”

The PLO foundation pays a monthly allowance of nearly $450 to the families of individuals killed due to the Israeli occupation. Families also receive an additional $120 for the wife and $50 for each child. As for those wounded in war, they are paid $300 per month, depending on the disability. In case of total disability, the wounded is paid $450 per month.

Despite the multiple laws issued by the PA to guarantee families rights and exempt them from taxes, no law exists to regulate the work of the foundation, according to a 2010 report by the nonprofit AMAN.