It is common practice in Gaza for a widow or widower to marry an in-law to keep the family together, and often they are being promised financial assistance to do so. 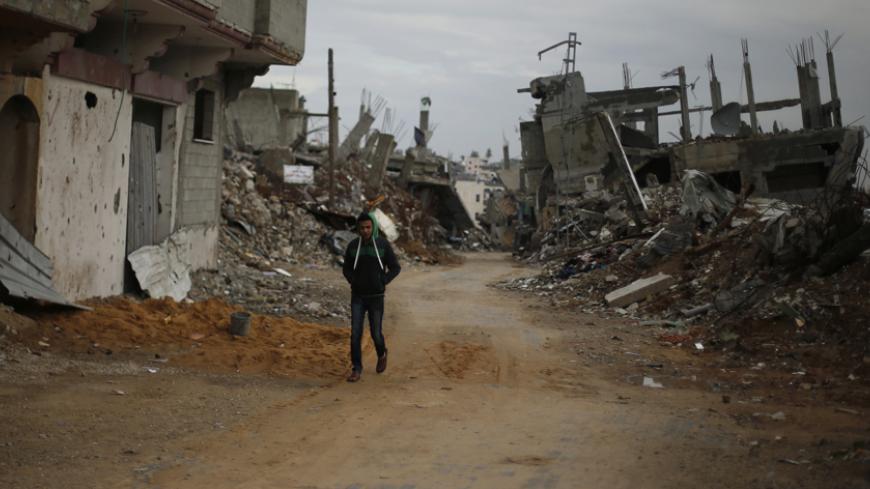 A Palestinian walks near the remains of houses, which witnesses said were destroyed or damaged by Israeli shelling during the July-August war between Israel and Hamas-led Gaza militants, in the east of Gaza City, Jan. 4, 2015. - REUTERS/Suhaib Salem

GAZA CITY, Gaza Strip — Ali Abd Rabbo is 19, but looks even younger. He sits in front of a computer, chatting on Facebook like most of his peers. In a few days, however, Ali will do something that he is not really prepared to do: He is going to marry two older women — the wives of his two brothers who were killed in the 2014 war against Israel.

In their house in Jabaliya, in northern Gaza, Jihad, 24, was sitting on her bed, holding a picture of her daughter Rahaf, 3, and her husband, Alaa. Tears streamed from her right eye. She had lost her left eye in the shelling that killed her husband, her daughter, her mother-in-law, her brother-in-law Mohammed and his two-year-old son Jamal, and two other brothers-in-law, Ibrahim, 22, and Abdullah, 23.

During the war, there was severe shelling as the family took shelter at a relative’s house. Ali, who had returned from receiving treatment for his war wounds in Turkey, and his sister, Walaa, 26, who told Al-Monitor her family’s story, somehow survived, along with Jihad and Islam, Mohammed's wife.

“I saw their bodies blown up in front of my eyes. I could not believe it. It was during the month of Ramadan, and we were about to eat. This winter reminds me so much of them. I will never forget them,” she said.

The family’s two-story home felt large, the floors crystal clean, but the house was completely empty and cold. This void and the silence were the main reasons behind the idea of Ali marrying the wives of his deceased brothers.

Dalia, Ali's 30-year-old sister, arranged the marriages. “After the war ended, and after the injured were healed, we all returned home, and it was empty. There was only my sister Walaa, my father and my brother Ali, and everything here reminded us of our martyrs. According to tradition, the wives of my martyred brothers would return to their families. This is why the only solution was for Ali to marry them,” she said, and convinced everyone of the idea.

Jihad told Al-Monitor, “I cannot leave my house. It reminds me of my dear husband and daughter. I do not want the rest of my children to grow up anywhere other than in their father’s house. I will marry Ali for this sole purpose, but he will always be like a brother to me.”

Islam, 21, said, “I know I am still young, and I can remarry, but after losing my husband, Mohammed, and my only son, Jamal, Mohammed’s family has me to remind them of him and the same goes for me. This is why I am going to stay here instead of going back to my family and marrying a stranger.”

Privately arranged unions are not the only type of marriage flowing from the difficult and painful circumstances of the war. There are associations that specialize in arranging marriages to widows and widowers who have lost their spouses in conflicts. The most notable occasion was when the Palestinian Marriage Fund organized a group wedding for more than 30 widows following the 2008-2009 war, with the women receiving an unspecified amount of money.

In December 2014, the Hamas-affiliated Al-Salah Islamic Society organized a similar ceremony in central Gaza, but in this case the husbands of women who had been killed were paired with new wives in return for financial aid. Al-Monitor tried to meet with the association’s president on several occasions, but he rejected the idea, arguing that a foreign media outlet would speak ill of the association for being Islamic.

Al-Monitor was, however, able to get in touch with a young man involved in one of the society's weddings. Mohammed Abu Jazar, 27, lost his wife Amani, his baby daughter, Marya, 18 months, and his son Firas, 3, during the 2014 war when their house in Rafah was shelled Aug. 3.

Abu Jazar suffers from depression. “I can never forget my son, my daughter and my wife, with whom I had created seven years of memories,” he said. Abu Jazar said his sister-in-law was the closest to his only remaining child, Maysem, 4, so he got engaged to her. “At first, my daughter was against it, because she does not want anyone to replace her mother, but she is now accepting the situation because it’s her aunt.” Abu Jazar, who lost both his legs in the shelling, said that the Al-Salah Society promised him and 10 others that as soon as they remarry, they will be provided financial assistance.

Zahia al-Qara, a psychologist, opposes these types of arranged marriages by associations, seeing them as interfering in the social structure of the family, making the purpose of marriage financial support rather than stability.

“The majority of these associations have a political agenda. This is how these associations guarantee that families will support them and the parties they are affiliated with in all future elections. It is a form of indirect control of social relations,” she told Al-Monitor.

Qara, who has worked with widows for three years, believes that the women remarried through these assocations suffer because everyone around them looks at them as an economic inheritance due to the financial support they receive for the death of their husbands. In short, they become the public property of either their new husband or their own family.

According to Qara, “There is always some kind of resentment toward these women who receive financial support. In one way or another, the family makes the widow marry her husband’s brother under the pretext of keeping the family together or for the children’s sake. In the case she wants to marry another man, she is often subjected to harassment and banned from seeing her own children.”

She also said that a man who marries a widow does not treat her like a real wife. He either takes another wife or treats her badly. “A 27-year-old widow, who married her husband’s 19-year-old brother once told me that he stays out all day, and he is always mean to her when he comes home, saying things like ‘I married you against my will,’” she said.

Qara said powerful politicians and association owners are behind these marriages and take advantage of the financial needs of war victims to receive assistance from their foreign backers under the cover of religion.

Ali and his two new wives Jihad and Islam will not have a wedding. This trio’s life will start in a memorial for their seven deceased relatives, as death seems to be omnipresent, even in new beginnings.