The approval of applications to run in the June elections by three polygamous candidates of the Turkish People's Democracy Party indicates that while the practice is illegal, the idea of marrying multiple wives could be acceptable by society. 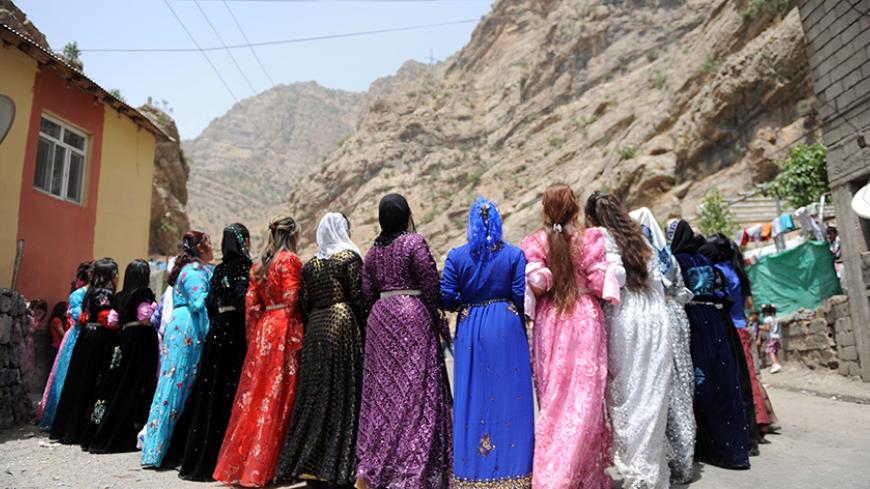 Kurdish women dance during a wedding ceremony at Yekmal village in the mountains of Hakkari, June 24, 2012. - Getty Images/Bulent Cilic

News broke on March 16 that the People’s Democracy Party (HDP) had approved the applications of three polygamous candidates in the eastern province of Hakkari. This was intriguing because only a week earlier the HDP, the party known for bolstering women’s rights and equality, had announced that men with a history of rape, sexual or physical harassment or those in polygamous marriages would be rejected to apply for candidacy in the June general elections. This controversy caused uproar in social media. Al-Monitor contacted several high-level HDP officials and the prospective candidates in Hakkari. Polygamy has been illegal in Turkey since 1926, making this is a sensitive issue. While HDP candidates declined to answer any questions, HDP officials told Al-Monitor that it is unlikely these prospective candidates will be appointed as HDP nominees in the upcoming elections.

These events reignited the debate about legalization of polygamy. Although Islam allows for up to four wives, in Turkish civil law only the first wife has legal status. The so-called sister wives are mostly left at her mercy in the case of the husband’s death.

Although credible data is unavailable, a 2011 Hacettepe University study reported that at least 187,000 women have sister wives in Turkey. The number is expected to have gone up with the influx of Syrian refugees.

HDP officials are struggling to walk a fine line, because in HDP’s stronghold regions, in rural and southeastern and eastern parts of the country, men marrying multiple wives is known to be common. Yet, polygamy in Turkey is not confined to rural areas. Al-Monitor investigated the phenomenon in the center of Istanbul. All names are pseudonyms to protect the identities of the interviewees.

Esma Erbil is a senior banker in her mid-40s. She has two sister wives. She holds a master's degree in business administration from a prominent university in the United Kingdom. She told Al-Monitor, “I met my husband in college. We fell in love and got married.” Esma announced her desire not to have kids in the third year of their marriage. She was in graduate school and her sole desire was to have a successful career. This decision upset her husband who kept bringing up the ideas on having a baby, including adoption and surrogacy. Esma told him that she would be fine with him having a baby with another woman who would like to have one.

In the fifth year of their marriage, Esma met Hediye, who was to become her ex-husband’s second wife. Hediye was already pregnant, and the couple did not want to have a baby out of wedlock. The three of them sat down and talked. Esma got a divorce, and a sister wife. The agreement was that Esma and Hediye would keep separate flats in the same neighborhood with a monthly schedule for the husband’s visits. Both of them were happy with the arrangement. Hediye has four children, and she works as a yoga and dance instructor. Seven years later, their husband brought in a third wife, Ayse. The same story repeated. They keep their incomes separate and divide the husband's income for the children. Esma, who has no children, seeks no money from her ex-husband. She told Al-Monitor, “I'm content with the arrangement. To be honest, Hediye and I were surprised to learn about Ayse, but we understand. This way we have a big family. I have not given birth, but I feel blessed with seven children. We spent most weekends together. Families come in different shapes.”

This story is rare by Turkish standards, as it is uncommon to find polygamous relationships among the secular, educated middle- and upper-middle class in urban areas. Ayse is in her late 20s and has three children already, as she got married while in college. She told Al-Monitor, “No one in my family knows. My mother would most likely have a heart attack if she knew. Frankly, I didn't know what it would be like to share my husband with two other women. It was difficult initially because I felt like an outcast, but now I feel I'm more independent than those who are in a monogamous relationship. I also feel proud that my husband still adores his wife of 20 years. That shows dedication and loyalty.”

Then there is the Cengelkoy family, who have established what they call a nifty white lie. They all share the same last name, because in Turkey divorced women can keep their husband’s name if they wish. The neighbors understand that a woman would have her ex-husband visit given that she has kids with him. None of the Cengelkoy wives ever had trouble with the law or the neighbors. Interestingly, none of them wishes for polygamy to be legalized. The third wife told Al-Monitor, “If relationships are based on love and trust, the current system is accepting everyone’s wishes. I know that when my husband takes on another wife, he will still care for me. If a woman cannot feel this, can we hold the marriage together just on paper? What good would that be? I'm not a third wife in our view. I'm a wife. I haven't lost my dignity and I don’t feel bitter. It is my choice.”

Not all sister wives are as happy and content as the Erbil and Cengelkoy families. Indeed, some of these marriages can be quite difficult to manage. In Fatih, a district known for its conservative nature, one might see women dressed in niqabs who appear to be sisters or mother and daughter shopping together or walking with a few children in tow. They could in fact be sister wives. Al-Monitor visited an apartment building where a man and his four wives reside. Each floor is home to another wife. Only the first wife, Kubra and her husband Murat Gultekin agreed to talk to Al-Monitor, as the other wives sat quietly.

Kubra said, “I'm the only one in a legal civil marriage, and the [11] children are registered as my husband’s children. We would like polygamy to be legal because this is our belief. The current legal system is corrupt; adultery and prostitution is legal, but marrying more than one person is forbidden. Why? This is not Islamic, so how can we be a Muslim country?”

Murat said, “I'm the only breadwinner in the family. I own a business with my father. The marriage to my first wife was arranged when we were both 17. Ten years later, I fell in love with one of my customer’s daughters. They both agreed, and we lived together in a small flat for 10 years." Pointing to the youngest two wives, he added, "Then we took in two Syrian refugees, who were initially to help around the house and eventually return [to Syria]. But the war continued and they became my wives and had my children as well. Their Turkish is limited, which prevents further tension.”

Kubra said that some of their neighbors have a Syrian sister wife, daughter-in-law or maid, while pointing out tens of pregnant Syrian women in the market with Turkish husbands. She said her Syrian sister wives are hardworking, respectful and caring, so she does not mind having them in the house. “Everyone has their own flat in this house and that is a nice luxury. For a decade, the second wife and I had a rough time. I was younger and jealous. There were nights when my husband was with her and I would just sit on the floor and weep,” she added.

Despite the legal ban and social stigma, polygamy in Turkey has not disappeared. In the last decade, the practice, which has been adapted to modern times, has been frequently discussed in the news — most recently because of the polygamous HDP candidates — and is a recurrent theme in movies. The stories of the Erbil and Cengelkoy families indicate that it can even be found in the least expected sections of society.