Protest by mothers turns up pressure on Turkey's HDP

Turkey’s main pro-Kurdish party has found itself under mounting political and social pressure as Ankara tries a new counter-terrorism strategy focusing on severing links between the it and the Kurdistan Workers Party. 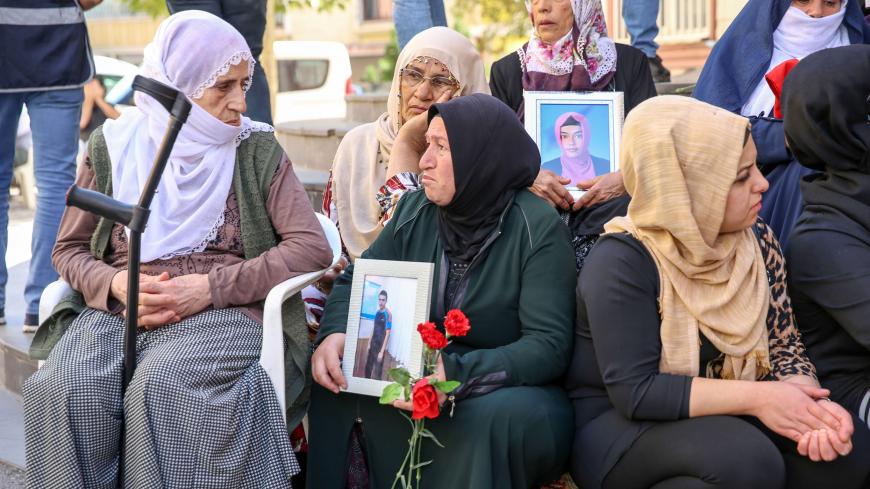 A sit-in protest by families who say they want to save their children from the PKK, Diyarbakir, southeastern Turkey, Sept. 25, 2019. - Omer Yasin Ergin/Anadolu Agency via Getty Images

In almost four decades of bloody conflict with the Kurdistan Workers Party (PKK), Ankara has used various counter-strategies to prevent the PKK from achieving its political goals, ranging from repressive ones such as counter-terrorism and an iron-fist approach to accommodative ones such as population-centric counter-insurgency and conflict resolution, including what was called the “peace process” from 2013 to 2015.

Today, Ankara appears to have turned to a more ambitious strategy of eliminating the PKK as an institution rather than preventing it from reaching its political goals, drawing on a domestic political climate that enables a no-holds-barred approach against the PKK and new military capabilities such as armed drones, smart munitions, T-129 attack helicopters, Bora tactical ballistic missile, counter-IED systems, 155 mm Storm howitzers, radars and day/night surveillance systems. The PKK, which took up arms in 1984, is considered a terrorist group by Ankara and much of the international community.

The goal of the new strategy can be described as total eradication of the PKK and all its auxiliaries in Turkey, not only in the military sphere but also in the political, socio-cultural and economic fields. The strategy aims to change the narrative of “Turkey’s Kurdish problem” — the traditional description of the problem in popular Turkish discourse — to “the PKK problem of the Kurds in Turkey” — a new description that is widely discussed in Ankara nowadays.

The most important leg of the new strategy is to break the PKK’s pressure over the Kurdish-dominated People's Democratic Party (HDP), the third largest force in Turkey’s parliament, and force the HDP to distance itself from the PKK and transform. As a result, the HDP has come under growing strains in recent months amid mounting accusations that it is recruiting militants for the PKK, helping the group financially and logistically and collaborating with the PKK’s urban militants.

Speaking in Istanbul last week, President Recep Tayyip Erdogan vowed to keep HDP leaders in jail, referring especially to Selahattin Demirtas, the HDP’s former co-chair who remains the party’s most influential figure after almost three years behind bars, reaching out to HDP supporters through messages communicated by his lawyers on social media. Erdogan has previously called Demirtas a “terrorist” and held him responsible for deadly Kurdish riots in Diyarbakir, the largest city of the predominantly Kurdish southeast, and elsewhere in the country in October 2014 over Ankara’s inaction against the Islamic State, which, at the time, had besieged the Syrian Kurdish town on Kobani just across the border.

“Those people have infiltrated even parliament. Our nation will never forget how they called people to streets and killed 53 people in Diyarbakir,” Erdogan said Sept. 21. “We cannot set those people free. If we set them free, our martyrs will hold us to account in the eternal world.” As is evident from Erdogan’s remarks, Ankara has come to portray the HDP leadership as terrorists.

In August, the government ousted the newly elected mayors of Diyarbakir, Mardin and Van, all HDP members, and replaced them with trustees. Tensions in the southeast have risen further over a sit-in outside the HDP building in Diyarbakir, launched by Kurdish women claiming that their underage sons and daughters had been forced to join the PKK.

The sit-in has been going on for almost three weeks, with the families urging the HDP to bring back their children they claim were taken to PKK camps in the mountains with HDP help. As a former military officer who has served in the southeast, I can attest that the PKK often cajoles underage youths to the mountains against the will of their families, deluding them with various promises. In other words, the families have a point. In a show of solidarity, ministers, politicians, journalists and celebrities have visited the sit-in, which has been going on under heavy security measures. In short, the protest has the full support of Ankara.

As of Sept. 21, 34 families had joined the “I want my child back” campaign. According to Ankara, the families “have overcome the wall of fear of the PKK in the region.”

Though some individual protests against the PKK’s coercive recruitment methods have taken place in the past, the sit-in marks the first collective action by families and, obviously, with strong support from Ankara. That the families are directing their demands to the HDP strengthens Ankara’s hand in terms of turning up social pressure on the party atop the political and military pressure. The protest has generated support from the overwhelming majority of the public, including the Kurds.

Sources in Ankara told Al-Monitor that the authorities have substantial evidence on how the HDP has helped recruit militants for the PKK and lent financial and political support to the group, raising the possibility of the HDP being outlawed if it fails “to distance itself from armed struggle and terrorism.”

Last week, the PKK claimed responsibility for a Sept. 12 roadside explosion near the town of Kulp in Diyarbakir province that killed seven forest workers and wounded 10 others, claiming that the victims were informants and collaborators of the state spying on PKK activities in the area. The investigation into the blast, caused by an improvised explosive device, led to the detention of the head of the HDP’s local branch, the mayor of Kulp — also an HDP member — and a senior administrator of the HDP-controlled municipality. The mayor was soon removed from office and replaced with a trustee.

To counter the anti-HDP campaign, some pro-Kurdish quarters have promoted the stories of mothers whose children were killed accidentally by armored vehicles used by the security forces in urban operations in the southeast since the summer of 2015. The face-off of mothers is a new phenomenon in the conflict between Turkey and the PKK.

Ankara’s strategy of forcing the HDP to dissociate itself from the PKK, coupled with whispers about the party’s eventual closure, is a big move, the consequences of which should be carefully considered.

A key question in terrorism studies is this: Can an armed non-state actor resorting to terrorism, such as the PKK, be deterred or should it be exterminated? Ankara seems to have decided to no longer try to deter the PKK but instead marginalize it through military means, combined with soft methods such as this campaign. Yet changing the rules of the game might not be easy with the PKK, which has become regionalized after decades of struggle and has now acquired increased international visibility and legitimacy for its fight against the Islamic State in Iraq and Syria and its partnership with the United States through local affiliates in northeastern Syria. Moreover, the PKK is capable of using hybrid tactics, retains strong public support and is a quick learner.

Finally, one should note that various theories, including the social identity and realistic conflict theories, have been employed to try to explain the Turkish-Kurdish conflict, but very few analysts and researchers have attempted to draw a connection between theory and fieldwork, addressing Kurdish ethnic identity awareness and measuring its degree among Kurds and the PKK’s impact on it. So the million-dollar question for Ankara is whether a total extermination of the PKK would also mean the end of the Kurdish ethnic awakening and the politicization of Kurdishness in Turkey.