A year after local polls, Turkey’s Kurds left with only third of gains

Not even the coronavirus outbreak has slowed Ankara’s crackdown on local administrations held by Turkey’s main pro-Kurdish party, which, many now fear, will continue until the last one is seized. 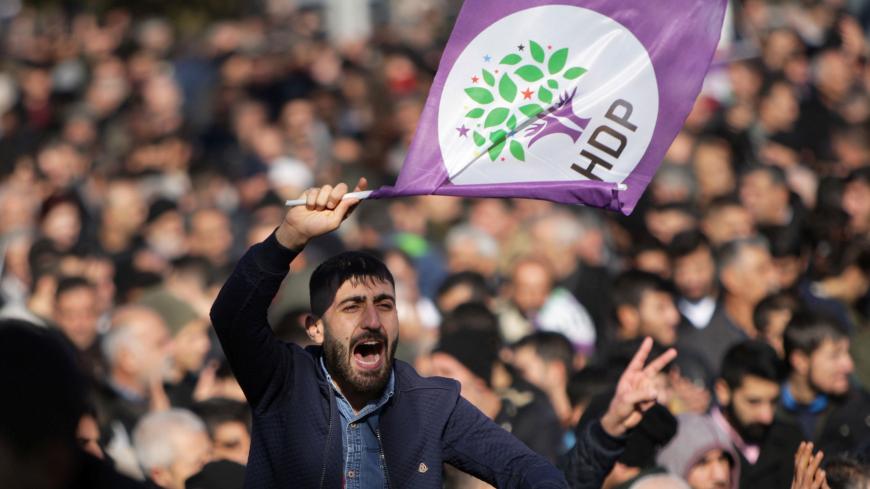 A supporter of the pro-Kurdish Peoples' Democratic Party shouts slogans during a demonstration in Diyarbakir, Turkey, Jan. 19, 2019. - REUTERS/Sertac Kayar

DIYARBAKIR, Turkey — Has Turkey’s Kurdish movement come to the end of the road after two decades as a major player in local administrations? It is a troubling question for many in Turkey’s mainly Kurdish southeast, where, a year after local elections last spring, the Kurdish-dominated Peoples’ Democratic Party (HDP) is left with only 19 of the 59 mayoral offices it had won. The rest have been taken over by government-appointed trustees. Not even the coronavirus outbreak has slowed Ankara’s crackdown, which, many now fear, will continue until the last HDP-run municipality is seized.

The Kurdish political movement made its first major foray into local administrations in 1999 by winning 37 municipalities in the conflict-torn southeast, where the outlawed Kurdistan Workers Party (PKK) has led an armed insurgency for nearly four decades. For ordinary Kurds, winning and running local administrations has been a source of pride. Kurdish mayors — often elected by a landslide — were the main political voice of the aggrieved minority in the many years the Kurdish movement was absent from the parliament in Ankara. Over the years, Kurdish mayors were often accused of links with the PKK and mismanagement, facing trials, inspections and vitriol. Yet, despite its heavy-handed policies on the Kurdish issue, Ankara never attempted an all-out purge.

Things changed in 2015, when settlement talks between Ankara and the Kurds collapsed, marking the end of a relatively moderate climate for the Kurds. The ensuing crackdown on armed PKK militants in urban areas was soon followed by massive purges amid a nationwide emergency rule in the wake of the 2016 coup attempt. The purges targeted all sorts of Kurdish entities, from political groups and civic associations to media outlets and cultural centers. Among the first in line was the Democratic Regions Party (DBP), which at the time represented the Kurdish movement on a local level. The government seized 95 of 101 DBP-run local administrations, appointing trustees instead of elected mayors, many of whom landed in jail for alleged links with the PKK, which Ankara lists as a terrorist group. The crackdown extended to parliament, where more than a dozen HDP lawmakers were stripped of their seats, with some of them still in jail.

While the Kurdish movement gasped, largely sidelined from the political scene, the trustees enjoyed broad financial means — courtesy of the government — to improve services and win the good graces of locals. Still, the HDP managed to win 59 local administrations in the March 31, 2019, municipal polls. The enthusiasm of the new mayors, however, lasted only four months. Diyarbakir, the largest city of the southeast, and two other major cities, Van and Mardin, lost their mayors in August in what became the first episode of a fresh ouster campaign by the government. In the latest round on March 23, Ankara dismissed eight HDP mayors, bringing the total to 40, astounding anyone who may have thought that it had its hands full with the coronavirus outbreak in the country.

According to Ahmet Demir, who lost his office as mayor of Batman in the latest wave and spent four days in police custody, the dismissals are devoid of legal ground and constitute an affront to the very concept of elections.

Arguing that no criminal evidence existed against him, Demir told Al-Monitor, “If you are to remove arbitrarily a mayor, elected with 66% of the vote, just because he is not to your liking, you’d better not hold elections at all.”

He added, “If we have committed any crime, they have to put forth what it is. We were detained for four days. They left no stone unturned, but found nothing. The court just issued an overseas travel ban. This hardly makes any sense.”

Referring to the coronavirus pandemic, he said, “Our response to the outbreak was deemed exemplary by everyone. They intervened as if to punish the whole city.”

According to lawyer Sedat Yurtdas, who was among the first to represent the Kurdish movement in parliament in the early 1990s, Ankara has “failed to learn a lesson” from the futility of similar oppressive moves in the past and stands to gain little even in terms of winning favor with nationalist Turks.

He told Al-Monitor the campaign against Kurdish mayors has become even less credible now that even local administrations in big urban centers, run by the main opposition, have become the target of government interventions, going as far as the blocking of fundraisers for residents affected by the coronavirus pandemic.

Others, however, disagree. According to Vahap Coskun, a scholar of law at Diyarbakir’s Dicle University, Ankara’s “trustee policy” will go on “as much as it can,” even though it has lacked legal credibility.

“There is nothing legally convincing [in the claim] that mayors in the region break the law as soon as they take office and are being dismissed over the detection of such violations,” Coskun told Al-Monitor. “And indeed, various cases concerning the mayors have clearly shown they never committed the crimes they were accused of.”

Coskun believes that not only the Kurdish mayors but all opposition-held local administrations are “in serious danger” because of a legal amendment, made after the 2016 coup attempt, that allows the government to appoint public servants instead of elected officials dismissed on terror-related charges. The provision, he explained, is a deviation from a long-established practice, under which mayors removed for wrongdoing have been succeeded by other elected officials from among municipal assembly members ever since 1930.

“The penal code’s definition of ‘terrorism’ is extremely elastic and any expression of opinion could easily be placed into the scope of terrorism,” Coskun said. “One could easily initiate a terror probe into a mayor, so any mayor could be dismissed on allegations of links to terrorism. This is very troublesome.”

By appointing trustees, the government might be hoping to sway voters, but the HDP’s showing in last year’s local polls proved that such aspirations are futile, according to Coskun. “Many trustees had been appointed before the March 31 elections, but voters in formerly HDP-held municipalities voted for the HDP again. Nothing changed,” he added.

The scholar criticized opposition parties for failing to raise a powerful voice against the dismissal of HDP mayors. “This is not a problem that concerns the HDP only — it concerns Turkey and local democracy as a whole,” he said.

According to Coskun, fellow opposition parties might be wary of the “terror label” of dismissals, fearing that they, too, could face the same accusations should they speak out loudly against the purge. “But this is unlawfulness and there is no guarantee it will be limited to one party,” Coskun said. “The rest of the opposition keeps quiet as the HDP is the target today, but tomorrow they, too, will be hit.”