Despite pressure from both the government and its own base, Turkey’s main pro-Kurdish party has decided against withdrawing from the parliament and local administrations in protest over its treatment. 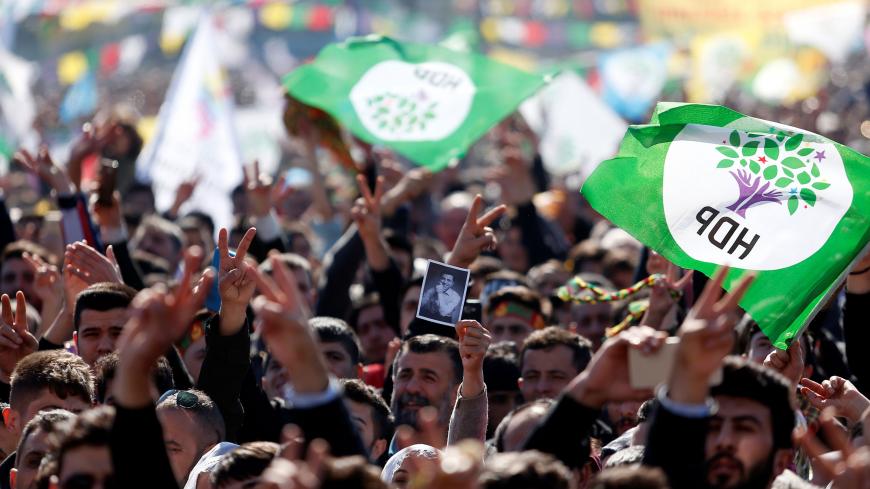 People wave pro-Kurdish People's Democratic Party (HDP) flags during a gathering to celebrate Newroz, which marks the arrival of spring and the new year, in Istanbul, Turkey, March 24, 2019. - REUTERS/Kemal Aslan

DIYARBAKIR, Turkey — The Indian summer sun that brightens Diyarbakir in November belies the gloom of a coterie of men conversing by the ancient walls of the city, the heart of Turkey’s predominantly Kurdish southeast. Their topic, reverberating from the Kurdish street to political halls in Ankara, is a tough one: Should the pro-Kurdish People's Democratic Party (HDP) withdraw from parliament and local administrations in protest of Ankara’s ongoing dismissals of Kurdish mayors?

“We live in a country where the will of the Kurds is disregarded,” one of the men said, arguing that it “makes no sense” for HDP lawmakers to stay in parliament. “I think they should withdraw. Enough is enough. How long could this possibly go on? They should withdraw and go home. Let’s see what happens afterward,” the man grumbled.

Both men asked not be named, a request that has become commonplace in Turkey, where even ordinary people often land behind bars for speaking out against the government or criticizing it on social media.

Since the local elections in March, Ankara has dismissed 24 HDP mayors, mostly over alleged links to terrorism, and replaced them with trustees.

Yet not everyone wants to see the HDP walk out in protest. One of the men, Vahit Altay, said, “So many people voted for them. Was this for nothing? Since they were elected by the people, they must stay there. That’s the will of the people.”

Kurdish politician Sirri Sakik sparked the debate earlier this month when he called on the remaining HDP mayors to step down in protest. “As [the appointment of] trustees is becoming routine and normalized, I expect nothing from the quarters or persons who claim to be democrats,” he tweeted. “Yet, I expect the HDP to extricate itself from this deadlock. My personal opinion is that the remaining local administrations should withdraw all together.” Veteran Kurdish politician Hasip Kaplan lent support to the appeal, fueling the debate.

In the HDP's constituency, indignation over the dismissed mayors has been directed not only at the government, but also at the HDP itself. Under mounting pressure to respond to the dismissals, the party leadership called an extraordinary meeting Nov. 20 to discuss a course of action.

Despite the popular pressure, however, Kurdish opinion leaders doubt the merits of abandoning the political realm. The HDP still holds an array of local administrations in the southeast as well as 62 seats in the 600-member parliament, where it is the third largest force.

Mehmet Vural, the head of the Diyarbakir-based Tigris Social Research Center, sees the base's reaction as overly emotional, arguing that the HDP should stick to its democratic struggle regardless of the government’s pressure. “I disapprove of a withdrawal,” he told Al-Monitor, stressing that such a move would leave the HDP without “a democratic working space.”

According to Vural, the HDP’s withdrawal from political platforms would play into the hands of the ruling Justice and Development Party (AKP) and its ally, the Nationalist Movement Party (MHP). Both often equate the HDP with the outlawed Kurdistan Workers Party (PKK), which Ankara considers a terrorist organization.

The HDP “should make use of the means and the space of democratic struggle as much as it can because if it leaves that space, it has nothing to put in its stead,” he said. “The Kurds no longer have anything to gain from armed struggle.”

Vural believes the AKP and the MHP are purposefully piling pressure on the HDP to edge it out of the political scene. “I think they should not be given that ammunition,” he said. “The struggle should continue until the last person in parliament and the municipalities. And when elections are held, they should run again. This space cannot be abandoned.”

The reaction of the base is understandable but the Kurds have been through hard times before, Vural noted, recalling the aftermath of military coups in the 1970s and the 1980s and the ferocious crackdowns at the peak of the PKK’s armed campaign in the 1990s. “This is not the end of the world for the Kurds,” he said.

Vahap Coskun, associate professor of law at Diyarbakir’s Dicle University, concurred, arguing that the HDP stands to gain little by withdrawing from the parliament and local administrations.

“By walking out from parliament, the HDP can force a by-election, but would this lead to [early] general elections or a change in the general political environment? There is a serious question here,” Coskun told Al-Monitor. “I don’t think the HDP would gain anything from an election that would only renew its deputies.”

Forcing local by-elections does not make sense either, Coskun opined, stressing that the 24 mayoral offices taken over by the government would be outside the scope of such a vote under the law and the HDP would risk losing some of the municipalities that it narrowly won.

“The democratic struggle must continue. The HDP should expose more explicitly how the action against the municipalities is not legal but political and should keep raising this on all platforms,” he said.

Coskun said, “The climate is very heated and emotional. People may express resentment and disappointment, but I don’t think this is a structural thing. It has to do with their current psyche. I expect HDP voters to go to the polls in a highly motivated manner in any future elections.”

At the meeting, the HDP decided against withdrawing from any political platform while calling for early elections. The party’s co-chair Sezai Temelli said, “The way out of this stranglehold is to step up the democratic struggle and adamantly protect the positions already won. It is our duty to protect the gains the people have won despite oppression and persecution.” The other co-chair, Pervin Buldan, said, “The Kurdish people will not surrender its gains. The HDP will not pull out of any struggle realm.”