Turkey's strategy against the Gulen movement has worked so well, Ankara looks to be extending it to eradicate the Kurdistan Workers Party as well. 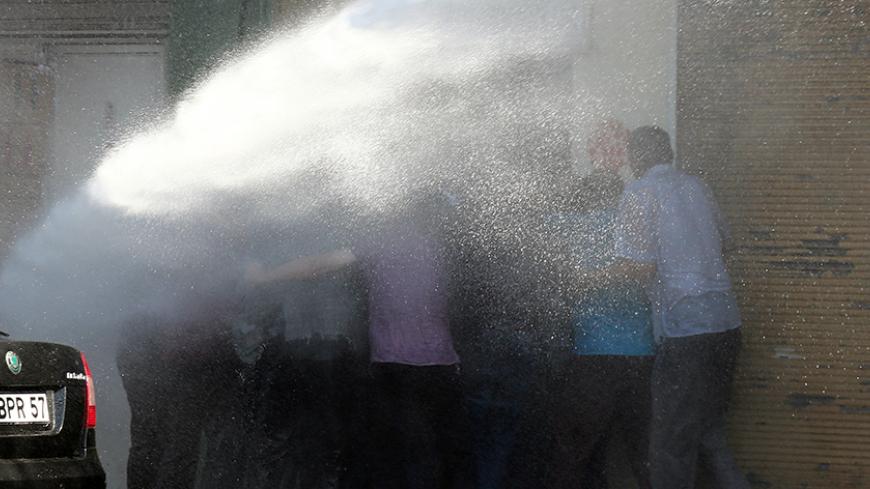 Turkish riot police use a water cannon to disperse Kurdish demonstrators protesting against the removal of the local mayor from office over suspected links with Kurdish militants, in Diyarbakir, Turkey, Sept. 11, 2016. - REUTERS/Sertac Kayar

It appears Ankara has decided not to bother with deterring the Kurdistan Workers Party (PKK) and will instead go straight to eliminating the designated terrorist group.

Turkey is taking advantage of its new powers under the state of emergency declared after the failed coup July 15. The new "solution process" is much simpler than previous efforts. This time, it plans to totally wipe out the PKK and all its auxiliaries.

In March 2013 — not too long ago in the context of the solution process — Turkey launched a three-phase plan with the PKK: The PKK would withdraw from Turkey and give up its arms, and that action would be followed by normalization and full democracy.

But with the developments in northern Syria of the past two years, growing polarization in domestic politics and the violence that resumed in July 2015, the solution process was shelved. Urban warfare in southeast towns such as Diyarbakir, Cizre and Sirnak between October 2015 and March 2016 shifted back to rural areas after the PKK abandoned its trenches-barriers strategy in towns. Now almost daily we wake up to news of heavy clashes, terror acts and martyrs in the southeast.

I had concluded in my May 16 column for Al-Monitor that Turkey versus PKK clashes were quickly heading toward a destructive military stalemate.

But with the current state of emergency — which does not require legislative oversight — Ankara feels it can end the deadlock and totally eliminate the PKK. It is now obvious that the legal measures Ankara applied against the Gulenists after July 15 are being adapted to the struggle against the PKK with intensified talk of “Gulenist-PKK links.”

First, the government modified its lexicon and changed “Kurdish issue” to “the PKK issue of the Kurds.” In this new narrative, the PKK is no longer the interlocutor in the Kurdish issue but is the problem itself. Prime Minister Binali Yildirim, during his Sept. 4 visit to Diyarbakir, had sarcastically declared that there is “no solution or anything” and that the government will pursue kinetic methods until the very end to annihilate the PKK.

What are the details of his new strategy to combat the PKK?

Encouraged by what it sees as success in the struggle against the Gulenists, Ankara wants to apply the same approach against the PKK. This new strategy can be described as total eradication of the PKK and all its auxiliaries, not only in the military sphere but also in political, socio-cultural and economic arenas.

Military combat is divided into rural and urban terrains. Yildirim described the basis of the rural terrain struggle as “from now on security forces will not be on the defensive but in the offensive.”

The military strategy in the rural areas will no longer be based on static, permanent outposts, but will employ mobile offensive units. Ankara relies heavily on advanced military technology of target acquisition and precise hits. The latest publicized hits were the killing of five PKK militants at Cukurca and later four others at Hakkari by Turkish-made TB2 Bayraktar drones.

High command has adapted the technology-intensive concept of “search-find-destroy” through a special forces/drones/F-16 triad. Officials are determined to pursue this concept with uninterrupted tempo in all weather conditions.

An important element of technology-intensive military offensive in rural terrain is to provide close air support. Ankara is confident that the T129 ATAK assault helicopters, the 14th of which was delivered last week, will make a significant difference in taking on the PKK on rural terrain.

Another feature of the combat in rural terrain is the government-sponsored village guards, made up of pro-government, armed Kurds who know the terrain well. With a recently issued decree under the state of emergency, the village guards — now about 90,000 strong — will be deployed not only in their home provinces but all over the southeast.

With another state of emergency decree, new police personnel can be recruited solely by oral interviews instead of going through the cumbersome central public service examination process. This means those with basic qualifications will be recruited to serve in police special operation teams after a simple interview and seven months of condensed training. Many young people see this as the simplest and quickest shortcut to acquire civil servant status.

The intention is to mobilize the security forces both in urban and rural terrains to exert round-the-clock pressure on the PKK and immobilize it.

There are many innovations in the civilian aspects of this new strategy. Ankara has realized that since 1984, when the PKK launched its military actions, the state’s response has never been properly coordinated between military and civilian officials, and this benefited the PKK. Now Ankara plans a "three-dimensional" strategy to eradicate the PKK from political, socio-cultural and economic arenas.

The moves in the political arena will start with national measures. Legal proceedings have been initiated against the pro-Kurdish Peoples’ Democratic Party (HDP) deputies and officials whose direct links with the PKK have been proved. In the latest move approved through a state of emergency decree, 24 elected Democratic Regions Party mayors were removed from office and replaced by government-appointed administrators. (In apparent retaliation for that action, a car bomb was remotely detonated Sept. 12 in Van, injuring dozens of people, Reuters reported.)

Ankara also replaced three other mayors elected from the Justice and Development Party and one from the opposition Nationalist Action Party, all accused of collusion with the Gulen movement.

Now cyberspace may well be the next arena of the confrontation. On Sept. 11, Turkey woke up to wide-scale internet outages in all urban areas where clashes are frequent.

In short, Ankara is pressuring the HDP and municipalities with HDP mayors to distance their politics from the PKK. Other government steps are similar to ones used against Gulenists such as clamping down on media organs, putting pressure on civil society and prosecuting private businesses that pay protection money to the PKK. Another prominent field of action by the government is to dismiss civil servants deemed PKK sympathizers, as it has done with thousands of Gulen sympathizers. On Sept. 8, the government suspended more than 11,000 teachers whose relationships with the PKK allegedly were established.

Sources in Ankara say this number could increase and dismissals could spread to other public bodies.

One key question in terrorism is this: Can a nonstate, armed actor that resorts to terror be deterred or should it be exterminated? Ankara seems to have decided not to deter the PKK and instead marginalize it with the new powers granted by the state of emergency.

But it may not be too easy to alter the rules of the game with an organization such as the PKK, which has become regional in more than 40 years of struggle. The PKK has recently acquired increased international visibility and legitimacy because of its fight against the Islamic State, can use hybrid tactics, has strong public support and is a quick learner.

Most important to note is that the PKK is patient. It knows it is running a marathon, while Ankara sees the struggle as a 100-meter dash. Then we have to ask: How long can Ankara sustain these extraordinary measures, and can the PKK really be eradicated?