To make up for the security gap in southeastern cities and Istanbul, Turkey has resurrected the historical institution of neighborhood street watchmen. 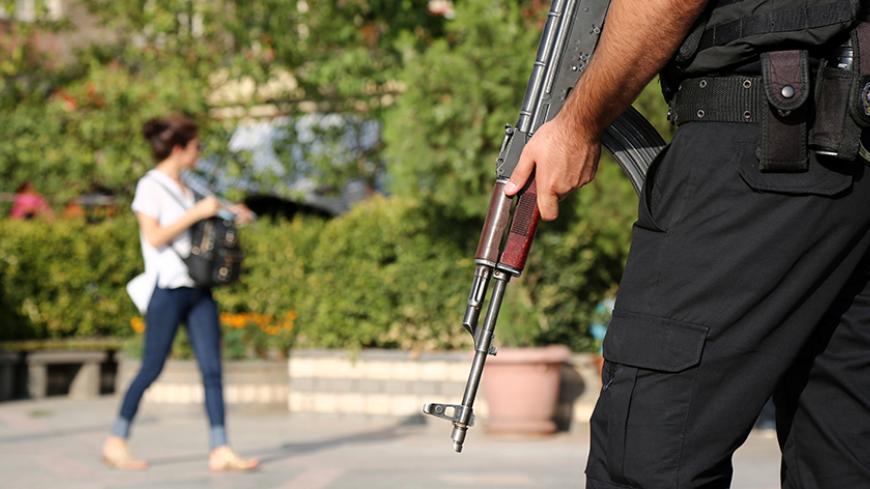 A policeman stands guard during a pro-Kurdish gathering in the southeastern city of Diyarbakir, Turkey, Aug. 31, 2016. - REUTERS/Sertac Kayar

The last time I saw a neighborhood watchman in Turkey was in 1988 when I was still in elementary school. By the early 1990s, as police forces in cities became stronger, the neighborhood guards who assisted police at night by patrolling on foot and blowing their whistles to assure people that "all is well" had all but become extinct.

But in early 2016, the Patriotic Revolutionary Youth Movement (YDG-H), an affiliate of the Kurdistan Workers Party (PKK) — which Ankara considers a terrorist group — intensified ditch-and-barrier warfare in Turkey’s Kurdish-populated southeast. That and a sharp escalation in local and transnational violence by Salafi networks linked to the Islamic State (IS) compelled the state to pay more attention to the security of cities.

Nevertheless, there is still an acute shortage of personnel against the PKK in the southeast and also against IS in provinces bordering on Syria, as well as in major cities like Istanbul. That's why Ankara resurrected the neighborhood guards/watchmen system, to improve coverage of residential neighborhoods. Ankara also hopes that the neighborhood watch system will contribute to human intelligence-gathering in cities.

The watch system that was recently launched in the southeastern urban centers of Sirnak, Siirt, Hakkari and Diyarbakir was working well, so the government decided to expand the system. At the moment, 5,400 mostly young neighborhood guards are working in 20 provincial centers and towns to help police maintain law and order. They are paid monthly salaries of $500-$700. Most of them are armed with pistols and AK-47 rifles. Some are patrolling unarmed.

In late February, the Ministry of Interior advertised for 7,000 new neighborhood guards. Some 700 of them will be posted in Istanbul, and the rest will be assigned to governorates in the southeast and along the Syrian border. By June, there will be 12,500 neighborhood guards on duty.

Meanwhile, work is progressing in Ankara to increase the number of village guards to 90,000 from about 67,000. Village guards assist in the fight against the PKK. About 18,000 village guards will be retiring in 2017, and 25,000 younger recruits will replace them. The government said it plans to improve salaries and benefits.

The village guards will be the largest armed paramilitary body in the country, followed by the neighborhood guards/watchmen. Ankara is also discussing whether to equip both guard groups with more effective machine guns, rocket-propelled grenades and armored vehicles.

As guards become more active, they also sustain more casualties. The latest casualty was in Urfa-Viransehir, where one neighborhood guard was killed on duty at the Judiciary Housing. Some are already accused of being moles helping the PKK by infiltrating guard units. According to security sources, about 40 neighborhood guards have been arrested on charges of assisting the PKK.

Ankara has been expediting the neighborhood guard system this year by arming pro-state Kurdish youth in city centers because of the approaching spring, when violence is expected to gain momentum. The government also wants to make sure it provides adequate security for the April 16 referendum on amending the constitution. Ankara believes the PKK, which has been under heavy pressure in cities and on rural terrain in recent months, is likely to resume its operations in the spring.

The question one asks is whether this antiquated neighborhood guard system, which is based on a law passed in 1966, will be an effective measure against terror in restive urban centers. The answer may be found in the evolution of the village guard system, which was implemented in 1985. In its first nine years between 1985 and 1994, the village guard system was an effective counterterror strategy, but their prolonged campaigns brought with them adverse consequences. The number of village guards employed surged from 9,000 to 45,000 between 1985 and 1987. The system quickly spread from nine to 20 provinces in an uncontrolled, haphazard expansion.

That rapid expansion of the village guard system hampered the state's control over the force. The guards' excessive use in operational activities soured their relations with the local population, and there were reports of village guards looting evacuated towns. There were no institutional mechanisms to investigate charges of abuse and corruption by village guards. Ankara is now trying to improve the legislation regulating the village guards, but problems persist.

Now the hasty establishment and expansion of the neighborhood guard system recalls those of the early village guards. Many feel Ankara’s attempt to arm civilians and employ them as neighborhood guards could be a useful counterterror instrument in 2017. But as clashes are prolonged, especially in the Kurdish-populated southeast, neighborhood guards may be subjected to the same unintended consequences. If not controlled firmly and quickly, they may become part of the problem rather than the solution.

Ankara’s myopic vision of the struggle against the PKK and IS so far has prevented it from analyzing the unintended consequences of the neighborhood guards.