Ankara is struggling to find a solution for the state-sponsored village guard system now that the peace process with the PKK is proceeding. 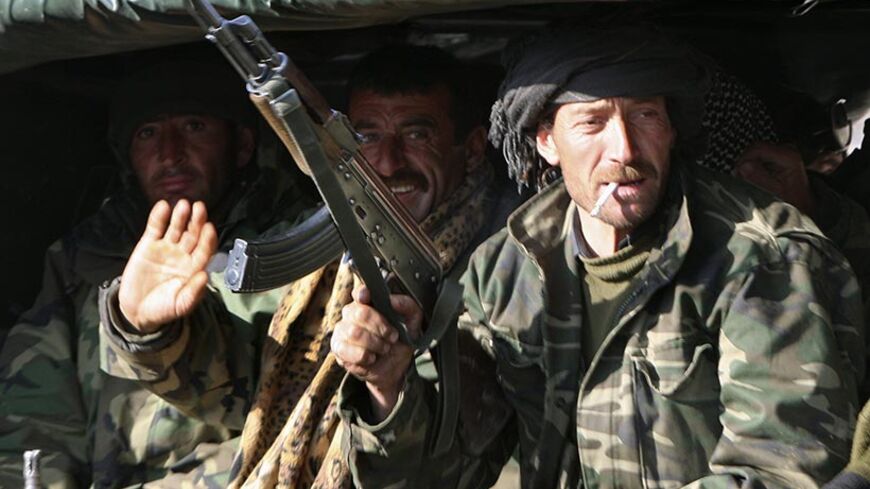 Village guards wave from their truck as they pass through the southeastern Turkish border town of Cukurca, Feb. 29, 2008. - REUTERS/Fatih Saribas

In any counterinsurgency strategy, the segregation of “bad guys” from the rest of the population is a significant objective. To achieve this objective, forming, arming and using local militias may be a viable strategy, particularly in rural, remote, mountainous and tribal areas in which security forces face challenges to reach the local population. In recent years, the “Sons of Iraq” or the “Anbar Awakening” campaign in Iraq and the “Tribal Security Forces (Arbakai)” project in Afghanistan were contemporary examples of this strategy. It is yet early to determine whether the strategy of forming local militias yielded successful results in Iraq and Afghanistan. The village guard system in Turkey, however, provides insights about the use of this strategy.

In Turkey, an interesting debate about the fate of the village guard system — a paramilitary armed force comprising 65,456 armed village guards, 46,113 of whom are employed and are paid around $300 monthly by the government, and 19,343 of whom are volunteers — has been going on while the conflict in the Kurdish-populated southeast Turkey was winding down with a fragile peace process underway between the Turkish government and the Kurdistan Workers Party (PKK). In April 2013, as part of efforts toward the peaceful settlement of the Kurdish issue, the pro-Kurdish Peace and Democracy Party (BDP) proposed the abolition of the village guard system. Although the government has not addressed this issue so far, this system, which was introduced as a counterterror strategy to isolate PKK fighters from the rest of the populace in the late 1980s, still exists in 23 provinces of Turkey.

For the camp favoring the system, on the other hand, the village guard system has been a success story in Turkey’s strategy against PKK-initiated violence to such an extent that it has become one of the main pillars of counterterror strategy. If the village guard system had not been initiated, the state authority in the region would have eventually collapsed. They also emphasize that the number of PKK militants has never exceeded the number of the village guards, even during the early 1990s when the number of the armed terrorists reached its peak of 11,000. For them, this is an indicator showing the low level of popular support for the PKK. Ata Altin, the general coordinator and the spokesman of the nongovernmental Village Guard Association suggests that currently all village guards are uncertain as to what the future holds for them.

Altin said, “The village guards have paid the price of the conflict in Turkey, have proven their tenacity. That is why we should not accept any dishonorable solution on this issue. The government should respect our past, our struggle and fallen comrades, and should tailor a policy that should not shadow the honorable struggle of the village guards.”

He also warned, “Some speak of retribution of the PKK execution teams that might follow once the village guards are disbanded and disarmed and if government does not protect us after taking our arms.” This seems indeed a justified assertion when considering the suspicious deaths of reputable village guards Hasan Caner on Jan. 13, and Mehmet Ugurtay on May 29, in armed attacks in Sirnak and Mardin province, making them the seventh and eighth village guards killed in suspicious circumstances in the last two years.

Altin suggested that the village guards have been defined as “traitor” (jash) by PKK supporters. Citing the threatening letter sent to Caner and Ugurtay before the attacks, he said, “In the letter, the PKK announces that it may even forgive the Turkish soldiers and police but defines the guards in the execution list as traitors, ‘jash.’ It will not forgive the guards and will kill them sooner or later.”

In military terms, despite its drawbacks and unintended consequences, the village guard system in Turkey worked well as a counterterror strategy between 1987 and 1999, and achieved the objectives of segregating the local population from the terrorists and denying the PKK control of their hoped-for secessionist territory. As seen in the Turkish case, the early success of the militia system needs follow-up before the insurgency adapts. Between 1985 and 1993, the village guard system worked well as an effective counterterror strategy. In the following years, however, it gradually waned in effectiveness, considering the growing number of PKK attacks in the period of 1993-99.

The Turkish government, which could not decide whether the system was working or not, has since been in a dilemma of deciding on the fate of the village guard system. Opinions about this issue highlight two options for the government:

The first option is demobilization. One form of this option is ”honorable demobilization,” which implies that government will end the guard system after providing all material and social rights and benefits to the retired and serving guards, and publicly praising the history of the guards for their role in the Turkish state’s armed struggle against the PKK. The other form, “dishonorable demobilization,” implies that the government will end the guard system with few rights and benefits for retired and serving guards, and will meticulously investigate the past of the guards to bring to justice those who allegedly committed crimes.

The second option is to maintain and continue the guards system. In this option, there again appear to be two alternative approaches. One is preserving the system after a comprehensive revision that examines the strengths, drawbacks and consequences of the system so as to make it more effective and efficient. The other approach is to adhere to the status-quo that implies the continuation of the village guards as an open-ended commitment not restrained by definite limits, restrictions or structure.

Currently, the Turkish government seems to embrace the last alternative; that is, maintaining the system as it is in an open-ended process by, leaving it to time. Sooner or later, however, when the government decides on the village guard system, this decision will surely be a strategic one that will directly affect the evolution of conflict and the peace process in Turkey.