Why PKK shifted to urban warfare

Many people couldn’t understand why the PKK resorted to trench-barricade warfare in cities. Some say the PKK was misled by reports of its militias who claimed people were ready to join an uprising. 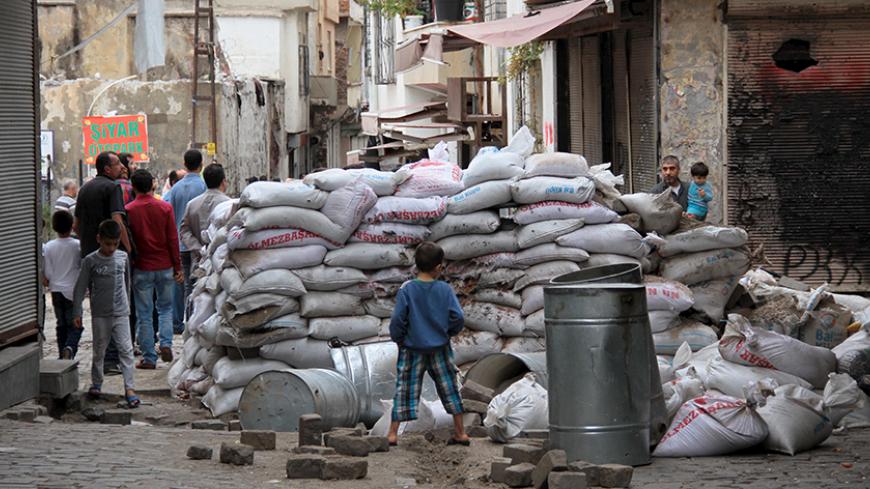 Residents walk past barricades in the Sur district in the Kurdish-dominated southeastern city of Diyarbakir, Turkey, Oct. 13, 2015. - REUTERS/Sertac Kayar

DIYARBAKIR, Turkey — Turkey has been debating the trench and barricade warfare the Kurdistan Workers Party (PKK) has launched in towns in southeast Turkey. Many couldn’t understand why the organization chose that method of warfare. But there are widespread allegations in the southeast that the organization’s leadership was deceived by reports sent by the PKK rank and file that the people were ready to join a popular uprising.

Vahit Cetiner is a shoeshine man on Izzetpasa Avenue in Diyarbakir’s restive Sur district. He has been living in the Hasirli neighborhood, which is now a heavy combat zone, for 65 years and shining shoes on the same sidewalk for 50 years. Because of Sur clashes, he lost both his house and his livelihood. He is now back at his job as the situation has calmed down a bit, but he is still not allowed to go home. He doesn’t really understand what is going on, but that doesn’t stop him from commenting on it: “The PKK believed that the people would be on their side. People were supposed to rise along with them. They filled the neighborhood with guns and bombs, but when the bombs started to explode, everyone escaped. There was nobody left standing with them.” Who knows if this is Cetiner’s personal opinion or the serious truth. But similar views have been circulating in the southeast for months.

For many, it didn’t make sense for the PKK to shift to urban warfare after the Kurdish political movement came out so strong after the June 7 elections. Perhaps Cetiner’s analysis answers this question. For months, there have been rumors in the region that a popular uprising was imminent and that the PKK had decided on urban warfare counting on these rumors. How was the PKK convinced that its trench and barricade combat technique would prevail?

The most serious allegation is that the PKK believed the written and oral reports it was getting from its people in towns. Al-Monitor’s queries revealed that many people involved in Kurdish politics knew about these reports sent to the PKK command. One person who spoke to Al-Monitor but did not want his name mentioned for security concerns said the PKK made its decision after the 2014 Kobani clashes and the mass protests in Turkey against the government for not challenging the Islamic State (IS).

After widespread, violent protests in many parts of Turkey, reports sent to the organization insisted that the people were ready for a popular uprising, and the PKK believed it. The same source said many prominent names in Kurdish politics tried to dissuade the PKK but didn’t succeed. This is why the PKK is now trying to determine who misled the organization, the source added.

According a news report on March 29, senior PKK commander Murat Karayilan admitted that the PKK’s trench warfare was wrong. He reportedly told a pro-PKK news agency that there was no need for such intensive combat in towns. Karayilan signaled that the PKK would return to rural terrain.

A regional journalist who is well-informed about the situation spoke to Al-Monitor on the condition of anonymity. He, too, said the PKK leaders were misled. The source said the PKK’s urban supporters had misinterpreted the June 7 election results.

“They thought that the entire electorate would back an uprising in locations where the HDP [Peoples' Democratic Party] got good results. People were told that the PKK had 600,000 militias.” These opinions reached the PKK command in the hills. They got carried away and even dug ditches on main highways.

That was during the Kurdish-Turkish peace process, and the state tolerated such PKK actions. That boosted the PKK’s self-confidence. “Then followed the goal of self-government, which the PKK could not reject,” the source said. The source said the election results were misinterpreted as justification for the trench and barricade tactics. It was easy to be misled. In Diyarbakir’s violent Sur district in the June 7 elections, HDP got 79% the votes, 91% at Sirnak, 89% at Silopi and 90% at Nusaybin.

Huseyin Turhalli, a former PKK official, said the organization had been getting similar reports for a long time. Turhalli told Al-Monitor that such reports could only affect the timing of actions: “The issue is not about these reports. You also have the Rojava [the term Kurds use to refer to western Kurdistan in Syria] angle and external support received. Then there is the provocation by the state. Reports can only affect the timing of plans and programs the PKK have already made.”

Some sources familiar with Kurdish politics also cited the comments of Duran Kalkan, a senior PKK official, about the clashes. “The balance sheet has been heavy. We didn’t expect such a response. We made a mistake. We thought our foes were human beings,” Kalkan said.

We asked the Kurdistan Communities Union (KCK), which is the executive council of the PKK, about these allegations. The KCK leadership that responded to Al-Monitor’s emailed questions rejected the allegations that the urban warfare was prompted by reports from the field. They said there were no such reports and added, “The war was launched by the AKP [Justice and Development Party] government and the presidential palace. Kurdish people were defending themselves. The country’s rulers did not want the Kurds to advance their cause through legal means and blocked their path to politics. That was an undeclared coup. The military was ordered to launch major attacks against the PKK. The HDP came under serious pressure. Kurds seeing the situation said ‘as we are sidelined from mainstream politics, denied parliamentary democracy, then we will develop democracy at local levels as the only way to democratize Turkey.’ KCK’s response concluded, “Democracy means people’s self-rule.”

According to security sources as of March 11 in locations such as Diyarbakir’s Sur district, Idil, Cizre, Silopi, Derik and Nusaybin — towns where the trench and barricade warfare was the most intensive — 1,267 PKK militants and 113 security forces personnel were killed.

On March 28, the chief of general staff released a balance sheet of operations that have been going on for 265 days since July 22, 2014. Excerpts from this official announcement explain the dimensions of the violence.

The announcement said 4,432 terrorists, mostly from the PKK, were killed, while the security sources suffered 377 martyrs; 213 IS terrorists were eliminated. About 300 civilians were also killed. Of 377 security personnel killed, 139 were police, 232 were soldiers and six were village guards.

Among 285 civilians killed, 11 were Germans, three were Israelis, two were Iranians and one was a Palestinian. They were killed in attacks by PKK, IS and the Kurdistan Freedom Falcons.

In security dragnets targeting the PKK and the Civil Defense Units — PKK's armed youth wing, previously known as the Patriotic Revolutionary Youth Movement — 10,326 people have been detained. Of that number, 3,387 were arrested.