Turkish officials believe Kurdish militants leading clashes in the southeast have learned techniques used by the Kurdish People’s Protection Units and the Islamic State in Kobani. 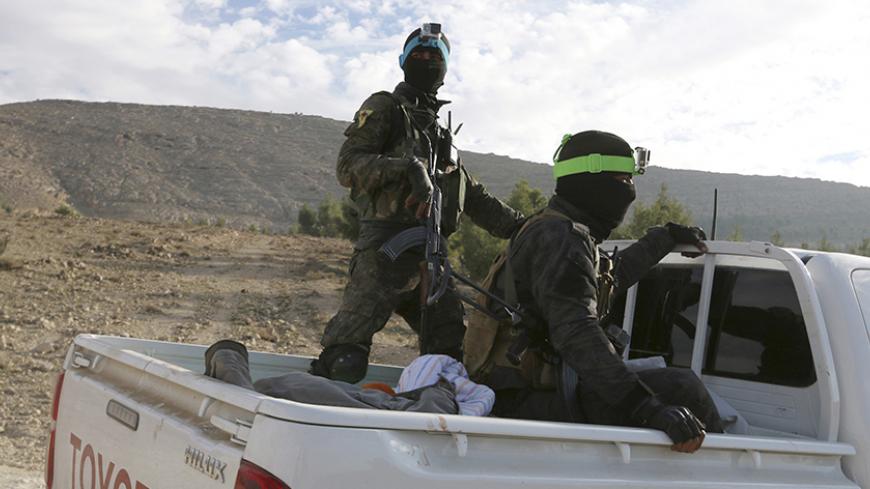 Fighters from the People's Protection Units ride on a pickup truck during what they said was an offensive against Islamic State militants, south of Kobani, Dec. 26, 2015. - REUTERS/Rodi Said

In the middle of heavy clashes Feb. 19 between Turkish security forces and groups affiliated with the Kurdistan Workers Party (PKK) in Diyarbakir’s Sur district came news that a building had collapsed. Three special forces soldiers in the building were killed. Official statements did not make clear what happened.

Security sources, however, told newspapers that the building had collapsed when a booby trap exploded.

The incident reminded observers of another on June 25, when Mishtenur Hospital, which had been held by the Islamic State, was blown up by the Kurdish People’s Protection Units (YPG) with all the people in it.

The techniques used were similar. But where had the Feb. 19 attackers learned these tactics? The force involved was the PKK’s youth wing, the Civil Defense Units (YPS) — previously known as the Patriotic Revolutionary Youth Movement.

A YPS fighter who uses the alias Xebat offered some clues when he answered questions from a Le Monde reporter at Nusaybin. Xebat said he had come back to Turkey after fighting at Kobani. “We are applying here what we learned at Kobani. [There], we learned urban warfare. Tunnels, barricades, roadside bombs and booby traps. We learned them all at Kobani,” he said.

In press photographs of the clashes in the southeast, there are clear similarities with the Kobani battle such as booby-trapped streets, using screens and drapes against snipers and aerial reconnaissance and passages between houses and backyards for safe movement. These tactics, which the Rojava (Syrian Kurdistan) YPG had used against IS, are now used by the YPS against Turkish security forces. Turkish officials are saying the fighters they are facing in the southeast are either YPG militants or YPG trained.

Journalist Ismail Eskin, who spent two years in Syria, including two months at Kobani during the clashes, told Al-Monitor there is a long list of similarities between the battles fought be the YPG and the YPS. Eskin said trenches were dug in and around Kobani before the clashes began and the course of the battles changed with the arrival of a group known as Al Akrad, which is experienced in urban warfare.

“Al Akrad, which was active in Aleppo, is made up of Kurds, Turkmens and Arabs. The first thing they did at Kobani was to hang huge drapes across streets and set up booby traps. The drapes blocked the sight of the enemy snipers and the facilitated movement of people and Kobani fighters. That is what we are seeing at Sur now. They opened holes in house walls with sledgehammers for safe movement,” he said.

Eskin said some of the fighters who fought with the YPG are now in Turkey, which is why the Kobani tactics are being seen there. “Al Akrad showed the YPG where and how to place explosives. There was no training given, but a sharing of experiences. I see people who had fought in Kobani in the streets of Cizre, Sur and Silvan. They were not YPG or PKK, but simple residents of Silvan who had responded to the YPG call for fighters,” he added. “After the liberation of Kobani, they returned home and went on with their lives. Now they are with the YPS. They use not only YPG but also IS tactics. Their techniques of preparing explosives and booby traps, especially those concealed in the trenches, are all IS methods.”

Another witness is journalist Kerem Celik, who spent two months in Kobani making a documentary film. He also thinks the course of the battles changed with the arrival of Al Akrad from Aleppo. He explained, “Initially there was a lot of inexperience in Kobani. There were no professionals. First they dug ditches around the town. The course of the battles was changed by that group, which had fought against IS at Aleppo. They knew all about urban warfare from their experience at Aleppo. They transferred their experience to Rojava fighters.”

Celik points to two key reasons why the battle changed course when Al Akrad arrived, saying, “In the Middle East, houses are built close to each other. They dug channels to connect the houses and their yards to avoid sniper fire. The second was the hanging of drapes across streets. There is no building higher than four or five stories in Kobani. Those who had the roofs of such buildings or other dominating features had the edge with their snipers. The ditches and drapes prevented IS' heavy weapons from entering, so they had to send in their fighters, who were then killed easily. With the holes they bored through walls of buildings, Kobani’s defenders enabled fighters to move safely and attack IS unexpectedly.”

It would not be an exaggeration, Celik said, to claim that a single blanket probably saved the lives of 300 people. It was a great defense against snipers. Aleppo fighters also taught local fighters how to booby-trap a building.

Celik noted other similarities between the tactics of YPG and YPS, saying, “Look, the YPS is present in towns as Nusaybin, Cizre and Kiziltepe, which are neighbors of Rojava. That is how they learned the combat techniques of both the YPG and IS. Most of their experience is derived from personal observations, although they may have received some training in preparing ambushes. Many of them had gone to Kobani and returned. Before Kobani, nobody knew of hanging drapes. In the old days they used to prepare Molotov cocktails; now they produce [improvised explosive devices]. You cannot underestimate the role of those who had gone to Kobani to fight.”

Even if there are no direct links between the YPG and the YPS, it is obvious that they learned each other's techniques. And their results are the same: mass migration and destruction. Just look at Sur and other hot spots.