Both the Turkish government and the Kurdistan Workers Party are feverishly preparing for expected heavy clashes in the spring. 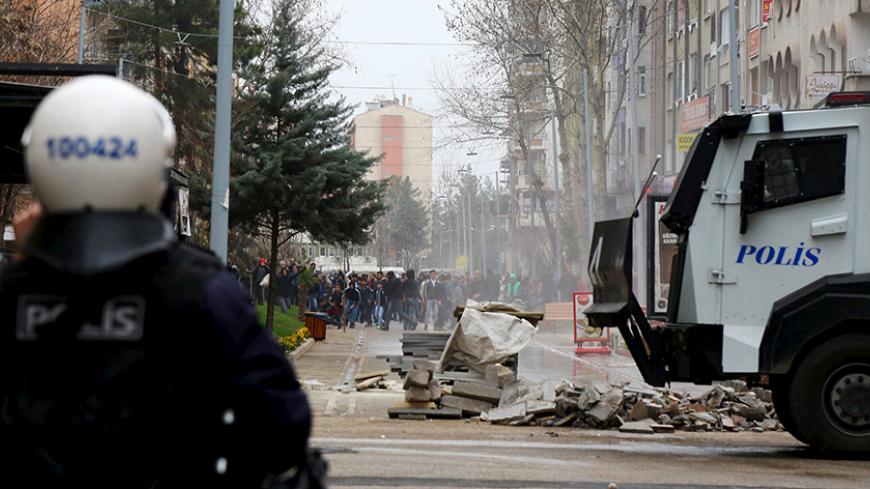 Kurdish demonstrators gather behind a barricade as they clash with Turkish riot police during a protest against the curfew in Sur district, in the southeastern city of Diyarbakir, Turkey, Feb. 21, 2016. - REUTERS/Sertac Kayar

This year, the coming of spring has not brightened the lives of people in Turkey's southeastern towns, where violence continues. The coming of spring means heavy winter conditions and melting snow are replaced by green trees and many rainy, foggy days. It also means a probable increase and expansion of clashes.

The milder meteorological conditions will allow the Kurdistan Workers Party (PKK) to become more mobile. With improved logistics support, the PKK could integrate its urban units, which have been operating independently, and transform them into a regional force and escalate fighting. Security forces, which are aware of these realities, are frantically preparing.

Security officials in Ankara expect multiple, simultaneous PKK operations on the ground or actions in the cities at the end of April. Ankara has reacted by increasing the number of special operations teams trained in urban warfare, appropriate vehicles and weaponry.

The Turkish Armed forces (TSK) also appear to be making similar redeployments and changes. For example, infantry brigades at Bingol, Sarikamis, Tatvan and Denizli have been transformed entirely to commando brigades. These four brigades, made up of 20,000 professional and specially trained soldiers, have been deployed to critical areas of Tunceli, Bingol, Agri, Hakkari, Sirnak and Mardin. Two commando battalions have been temporarily redeployed from Cyprus to defend some permanent bases in the region.

The TSK’s increasing need for manpower this spring to set up permanent regional bases may force it to stray from its established principle of fielding only professional troops in anti-terror operations and not using conscripts.

In short, Turkish security forces are planning to double their presence in the region to sustain their control of towns and to dominate the rural terrain.

The PKK is also active, reinforcing its mountain units. Turkish intelligence has reports that the PKK may shift its operations to the calmer Van region and rural areas to ease the pressure it is currently under in Nusaybin, Sirnak and Yuksekova, and to launch attacks in western cities. The PKK, which appears to have learned well from the first wave of combat in Silopi, Cizre, Idil and Sur, is hunting tanks and armored vehicles using snipers, planting roadside bombs and digging tunnels.

In the past two weeks, about 50 security personnel have lost their lives in Nusaybin, a scene of heavy clashes. Normally a town of 90,000, its population is now down to 30,000. In this town, which abuts the Syrian border across from the Kurdish town of Qamishli, there are wide avenues and four- and five-story concrete buildings, unlike in Cizre, Sur and Silopi, where there are mostly narrow streets with trenches dug and barricades backed by roadside bombs.

In Nusaybin, clashes take place mostly inside buildings. The PKK, which has prepared well and deployed experienced units, plants explosives at the foundations of buildings likely to be searched by security forces and sets them off by remote control. Reports say there are about 300 PKK militants from its rural units in Nusaybin, in addition to 700-800 local Civil Defense Units militants.

In six neighborhoods of Nusaybin where operations continue, security forces have identified about 200 buildings the PKK uses for safe houses, medical stations, ammunition storage and supply warehouses. After many personnel lost their lives in building collapses, the security forces are now considering the use of heavy fire from a distance to demolish all those buildings in the six neighborhoods, after first evacuating civilians.

“If necessary, we should think of totally evacuating the places, which are not anymore habitable anyway, and pulverize them from a distance. We should totally raze these locations and rebuild them,” President Recep Tayyip Erdogan said recently. “We won’t sacrifice even a finger of our police and soldiers for all the piles of concrete and iron there. We are sustaining martyrs because of this.”

According to security experts quoted by Turkish media, what is happening in Nusaybin is not a classic terror operation, so the buildings the PKK is using for combat purposes should be collectively flattened by heavy-caliber fire from a distance.

As the clashes and casualties in Nusaybin have become a main agenda item recently, Turkey has devised a new strategy to handle the problems in that town. After reports of coordination discord between the governor of Mardin province and security units on the ground, the authority for operational decisions in the town was transferred from the civilian decision-makers to the military, which means consolidating intelligence and decisions to a single military command. For the first time since July 22, when the clashes began, command and control in Nusaybin will be exclusively in the hands of senior military officers.

Al-Monitor consulted technical experts who said it won’t be easy to destroy the concrete-and-steel structures with tank and 155-mm artillery fire from a distance. These experts, who spoke with us on the condition of anonymity, said one option is to use penetration ammunition similar to laser-guided, 2,000-pound MK-84 ammunition fired from planes. Another option would be to use concentrated barrages of 203-mm artillery. The last option would be to send in armored bulldozers protected by tanks. Given the sharp increase in public sensitivity and the political pressure exerted from Ankara, security forces may have to make a decision soon.

Nusaybin may well be the harbinger of a new phase of wider and more violent clashes in the spring. The use of tanks, heavy armor, antitank weapons, snipers and roadside bombs are amplifying, increasing the destruction. Turning over the decision-making to the military could mean even the use of combat planes might be on the agenda.

No wonder, then, that the coming spring isn't bringing the usual joy and happiness, but more fear and anguish in the region.