As both sides rattle sabers, is Turkey on verge of civil war?

Armored and aerial Turkish security forces and the PKK appear to be gearing up for a major offensive in the southeast, evacuating civilians, forbidding doctors from leaving and expanding morgues. 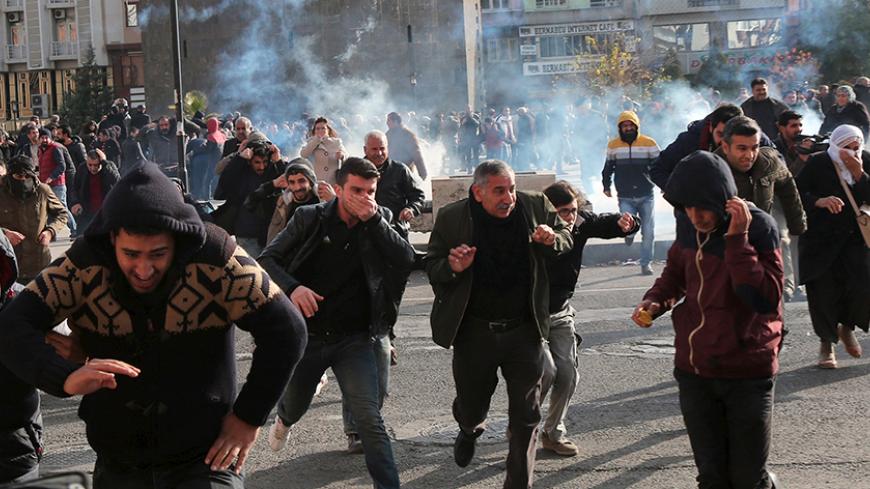 Riot police fire tear gas to disperse demonstrators during a protest against the curfew in Sur district, in the southeastern city of Diyarbakir, Dec. 14, 2015. Turkey's mainly Kurdish southeast has been beset by unrest in recent months as security forces battle Kurdistan Workers Party militants after a cease-fire collapsed in July. - REUTERS/Sertac Kayar

It's time to revisit the topic of a potential civil war in Turkey. In my Aug. 13 column, "Speculation about Turkish civil war is just that," I concluded that because we had not yet seen large-scale operations supported by brigade-sized armored units and air forces, it was too early to discuss the likelihood of civil war.

But since Aug. 13, escalating clashes between Ankara and the Kurdistan Workers Party (PKK) have shifted to urban centers. There are certain thresholds of violence that could provide answers to the question, "Are we heading to civil war?"

For Ankara the signal could be its use of armored forces in cities — firing tank guns at PKK targets and bombing targets in cities and their fringes.

For the PKK, the sure signs of approaching combat would be if it deployed experienced mountain fighters with young and inexperienced Patriotic Revolutionary Youth Movement (YDG-H) militants in towns, forming hybrid units of mountain fighters and urban militants. Another sign would be if the PKK transforms the trenches it has dug in cities into reinforced strongholds — devising armored ambush locations and strengthening these defenses with improvised explosive devices.

When we see these moves, we will know that Pandora’s box has been opened and we can expect that both sides are heading to a level of violence that could become a civil war.

Unfortunately, all of these actions are likely to take place in the coming days, particularly in the urban centers of Cizre, Silopi, Sirnak, Nusaybin, Yuksekova and Semdinli and the Sur district of metropolitan Diyarbakir, according to information from the field and Al-Monitor sources in Ankara.

For the past 10 days, both Ankara and the PKK have been telling civilians in those locations to leave, warning, "A major clash is coming. Neutral civilians should leave. Those staying behind will have to live with the results of the inevitable destruction.”

At the moment, the Turkish army is moving tanks and armored vehicles to lay siege to those towns. Checkpoints have already been established at the towns' entrances. In many towns, particularly in Cizre, Silopi and Nusaybin, education has been halted with an extremely unusual move by the Ministry of Education, which sent text messages to about 3,000 public teachers instructing them to return to their hometowns for "on-the-job training." Since nobody believes such training would be done in the middle of the school year by closing schools, it is seen as a sign of approaching battles, further panicking the population. Now, teachers and other civil servants are rapidly evacuating these towns. Those who couldn’t find buses to get out were seen walking and hitchhiking.

Local sources told Al-Monitor that those who can leave these towns are escaping to the west of the country or to safer villages in the region. Half of Silopi and Cizre are already empty. Particularly in Cizre and Silopi, doctors and health personnel in public hospitals are not allowed to leave. Seriously ill patients in those hospitals have been moved to other cities. Rumors that there is intensive work to expand the capacities of hospital morgues have raised fears of mass killings.

How will the PKK defend itself? It understands that a major offensive against it is about to be launched. Will the PKK try to avoid combat by making its elements in towns invisible, or will it opt to fight? Al-Monitor’s sources and operations in the field suggest the PKK will fight. In the past, veteran PKK fighters reinforced young urban fighters by using a strategy of "come-coordinate-depart," but now the strategy has become "come-stay-direct." If these hybrid forces of veteran PKK fighters and young YDG-H militants in cities are equipped with advanced anti-tank missiles such as Milan, Kornet and TOW and shoulder-fired ground-to-air missiles that could change the entire nature of the anticipated clashes.

The PKK also is preparing for the economic facet of war. According to Al-Monitor sources, the PKK reportedly intends to regulate financial activity in clash locations, first of all by drawing up lists of “friends and foes.”

Will this grand operation by security forces that is widely expected in coming days lead to a civil war? For an answer we have to study two major issues.

The first: What will be the social costs of this seemingly inevitable grand operation? If these moves cause major losses for civilians living in clash zones, they will also be inflicting substantial damage to the hopes and willingness of the Turks and Kurds to live together in Turkey. A military victory in the field could in the long run result in a political and social defeat for the state.

The other important aspect is the potential PKK reaction to a major operation by security forces. The PKK could disappear from the field and Ankara might not be able to find anyone to fight with. Or, the PKK could opt for a strong defense in the combat zone. But the worst-case scenario many fear is that the PKK, to ease pressure in the combat zone, would spread the clashes throughout the country, particularly to major metropolitan centers such as Ankara and Istanbul. If this happens, Turkey could encounter a critical schism and head to a civil war.

Political decision-makers in Ankara feel the need for a military victory in the struggle with the PKK. But the question here is not how to score a military victory, but how to cope with the long-term political and socio-economic costs of such a "victory."

The basic problem in irregular warfare in recent years has been this: Decision-makers excessively focused on military victories for short-term gains can miss out on political success and peace in the long term. One can only hope that Ankara is aware of this paradox.