Ankara will be entering potentially hazardous territory in its unprecedented plans for reconstruction in the Kurdish southeast. 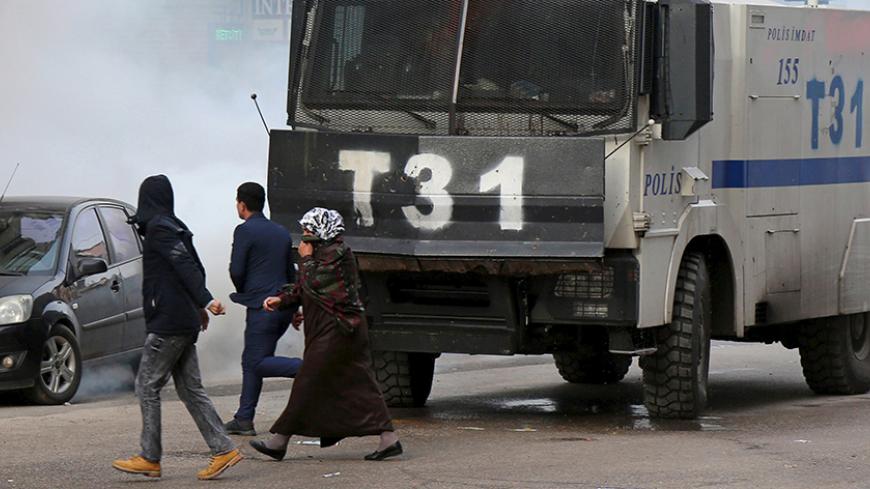 People walk past an armored police vehicle as Turkish riot police use tear gas to disperse Kurdish demonstrators during a protest against a curfew in Sur district and security operations in the region, in the southeastern city of Diyarbakir, Turkey, Jan. 17, 2016. - REUTERS/Sertac Kayar

The country continues to be preoccupied by the fighting that broke out in July between government armed forces and the Kurdistan Workers Party (PKK). Over the past three months, their battles spilled over from rural areas into town centers in the southeastern part of the country, which has a Kurdish majority. Government troops have cleared some populated areas of the PKK, prompting Ankara to announce plans for reconstruction of a kind it has never previously attempted.

Information released Jan. 20 by the office of the chief of the General Staff said that since the clashes began, 610 PKK members had been killed in three areas: 364 in Cizre, 140 in Silopi and 106 in Diyarbakir’s Sur district. The number of PKK militants killed since July exceeds 1,000 when losses are included from 10 other towns that experienced occasional clashes. During the same period, 236 security personnel were killed.

Civilian fatalities now exceed 500. The dimensions of the social and economic ramifications of this conflict can be better understood by bearing in mind that the clashes in towns have displaced more than 1.3 million people. Some 400,000 students have not attended school for three months. The economic fallout in Cizre alone has reached $300 million because of the disruption in border trade with Iraq. If clashes continue at the current pace, Turkey will in four years have replicated the economic losses of the 29 years between 1984 and 2013.

During a Jan. 19 visit to London, Prime Minister Ahmet Davutoglu told journalists that operations in Silopi had ended. “Silopi is cleaned. We will set up a new security structure there. There won’t be any more streets for terrorists to strut down. Soon Diyarbakir’s Sur and Cizre will also be secured,” he declared.

Davutoglu also disclosed that there will be major urban transformation projects implemented in the towns where clashes were heavy. He said Hakkari's provincial capital will be relocated to Yuksekova and Sirnak's provincial capital moved to Cizre. “Only then will public services be more effectively provided in these critical provinces, and security weaknesses will be rectified,” Davutoglu said.

In contrast to Davutoglu's low-key statements regarding the post-conflict period, President Recep Tayyip Erdogan was in no way conciliatory in a speech during his traditional meeting with village leaders (“mukhtars”). “In the next phase, we will never deal with the separatist terror organization [PKK] or parties and other organizations it manipulates. That is over. Justice will deal with their organizations, deputies and municipalities,” Erdogan said. He also, however, signaled that major urban transformation projects will be undertaken in places where clashes had ended.

Although Davutoglu declared Silopi clear, and the military high command says 140 militants were killed there, local sources think it is still too early to declare anything over. According to information Al-Monitor received from a source in Silopi, all trenches and barricades have been removed, and security forces are in full control of the town. Mustafa A. said, however, “The real test of the state is now about to begin. Actually, in Silopi, street clashes were not as intense as in Cizre and Sur. With the lifting of the curfew, civilians living in neighborhoods affected by clashes are returning to their homes, but they are still afraid to bring their children back, as they are not sure that clashes are totally finished.”

Meanwhile, Suleyman D. observed, “There were about 30 PKK militants and 200 YDG-H [Patriotic Revolutionary Youth Movement] youngsters fighting in Silopi. About 30 of them were either apprehended or killed. The rest? They melted away; that is, they left the town.” He noted the challenges presented by winter. “Because of snow, communication between towns is spotty. Security forces are making good use of thermal surveillance technology in winter and snowy weather. We always have drones over our heads. It won’t be easy for the PKK this winter. But when the snow melts in April, if negotiations don’t begin, then clashes could resume.”

Indeed, fear prevails in the region that negotiations will not resume in spring, and even more intense violence will ensue. From Erdogan’s statements it is clear that the government intends to pursue a strategy of all-out aggression in a war of attrition aimed at eliminating the PKK presence along with its partisans. This strategy involves wiping out entire economic, intellectual, cultural and social habitats of terrorism in a "tooth for tooth" approach. Ankara is not pursuing a policy of deterrence, but one of total annihilation.

Security sources in Ankara told Al-Monitor that nearly all the trenches and barricades in Cizre have been removed, and two battalions of Turkish army special forces with 150 elite “maroon berets” have been tasked to sweep the Sur district. Sirnak and Nusaybin are said to be next in line.

The question now is what will happen after these towns are secured by the state. Holding on to secured areas and reconstructing them is usually harder than the fight to take them. Experiences from Iraq and Afghanistan have shown that military sweeps limited to military methods and instruments are the easiest phase. Post-conflict reconstruction, with which Ankara is unfamiliar and will be attempting for the first time, is an extremely complex undertaking that requires identifying problems and taking proactive measures before they erupt. Among the critical elements involved are determining how to organize political power, ensure security, design rebuilding and distribute allotted funds.

Ankara appears to be inclined toward a centralized state structure in the affected areas. All critical actions will adhere firmly to established rules and regulations or be referred to Ankara for approval or decision. Local decision makers will have diluted powers and limited capacities for taking the initiative. Here one must be on the lookout for possible discord between the field and the headquarters.

One question that must be addressed is whose security comes first: the state's, state organizations' or citizens'? If Ankara gives excessive priority to public order in lieu of citizens’ security, a stable security arrangement might be difficult to achieve. Local sources have frequently said that the police special operations teams brought in from elsewhere as reinforcements have intolerant attitudes that aggravate local residents.

The design and reconstruction of towns is obviously important. For example, in the reconstruction of Silopi, all zoning rules and plans will be reviewed. Where will the administrative center of the town be located? Will all public agencies be relocated to a compound behind high walls, like Baghdad’s Green Zone, or will they be scattered, as in Kabul? In particular, how will the neighborhoods that had trenches and barricades be redesigned without making life unbearable for residents facing strict security measures?

The material damage inflicted by clashes might have infuriated most citizens, but for a small, ambitious group it represents a lucrative source of income. Construction work for the urban transformation means more tenders to bid on and more money to make. The state needs to keep close watch on who is making how much from reconstruction. Reports are already circulating that the projects will be awarded to entrepreneurs close to the ruling Justice and Development Party.

The matter of hearts and minds might override the critical material, security and financial issues. Although one can visibly assess the economic consequences of the damage in Silopi, Cizre and other towns, one cannot measure the destruction to the hearts and minds of the people, except to observe its profundity.

Ankara has to think long and hard about the reconstruction process. Sadly, the country's increasing polarization impedes having a constructive debate. The deadliest outcome of a sterile debate could be Ankara’s whole-hearted return to a security-oriented policy encouraged by its success thus far.