Expanding clashes in Turkey’s largest Kurdish-populated city have triggered a fresh civilian exodus, with many residents fleeing their homes with only the clothes on their backs. 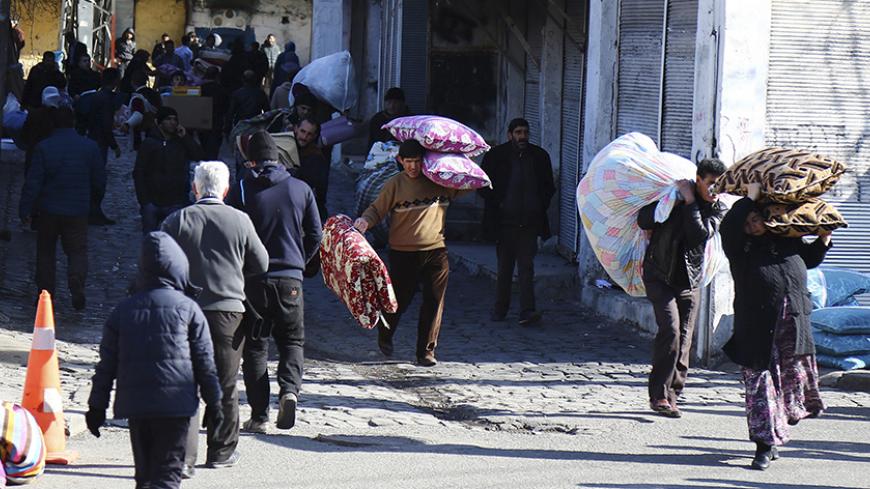 Residents carry their belongings as they flee the Sur district in the Kurdish-dominated southeastern city of Diyarbakir, Turkey, Jan. 27, 2016. - REUTERS/Sertac Kayar

DIYARBAKIR, Turkey — In his 1853 travelogue about Diyarbakir, German orientalist Julius Heinrich Petermann described how he reached the city after sunset to find the fortress gates locked and had to wait for the morning to enter the city. More than 160 years later, those waiting at the gates of the old walled city — now Diyarbakir’s district of Sur — are its own Kurdish residents, forced out from their homes amid clashes between the Turkish security forces and armed militants entrenched in residential areas.

On a cold winter day last week, dozens of people — refugees in their own city — waited at the checkpoint at the entrance of Sur, desperate to be let in to take a few belongings from their homes, since they had fled with only the clothes on their backs. The police would not budge, leading one resident to exclaim, “We’ve sheltered the Syrians, but who is going to shelter us?”

Five neighborhoods in Sur have been sealed off under a round-the-clock curfew for almost two months as the police and the army battle militants of the Patriotic Revolutionary Youth Movement (YDG-H), the youth wing of the Kurdistan Workers Party (PKK). The rebels have been holding out behind trenches and barricades in narrow residential streets, often planted with explosives and booby traps.

On Jan. 27, the scope of the curfew was extended to six other neighborhoods, where YDG-H militants were found to be holed up. Residents were ordered to evacuate their homes — some by the police, others by the YDG-H — but the sound of gunfire rang out before they were able to leave. The civilians’ flight from the area was a run for their lives.

Ramazan Mutlu, a 65-year-old who waited at the checkpoint on Jan. 29, recounted how the rattle of spades startled him one night around midnight last week. When he went out to check, he saw masked men digging a ditch. He admonished them, but they would not stop. Shortly, the police arrived and the diggers ran away. The police ordered Mutlu’s building evacuated. Some 40 people, all from the same clan, left the three-story building in haste, taking refuge with relatives in other neighborhoods or nearby villages.

“Because they dug trenches, vehicles could not enter the neighborhood. The police told us to leave and come back in the morning to collect our stuff,” Mutlu told Al-Monitor as he waited in vain for the promised permission to go back and collect belongings.

“We are now left homeless. Some of us went to the village; others were scattered around [the city]. … Different people have sheltered me in their homes during the nights. If we can’t take our belongings tomorrow as well, we’ll probably go to the village and become shepherds,” Mutlu said.

He waited some more at the checkpoint, but the police were unrelenting. As Mutlu walked away — probably to look for a place to spend the night — an agitated woman argued with the police. “Let me go and take a blanket at least,” she pleaded in vain.

“We left only with the clothes we had on,” she told Al-Monitor, refusing to give her name or have her picture taken. “My eldest son is doing his military service, and I don’t have a husband. What is a single woman like me supposed to do?”

The woman said the order to evacuate their home, which was on a street where clashes were taking place, came from the police. “There was nowhere for me and my children to go. A charitable man offered us shelter. He gave us a room in his home, but we have no belongings with us. We all sleep on the floor,” she said.

The woman’s long wait at the checkpoint also proved futile. Desperate, she walked away as another woman sought to negotiate with the police. Pointing at her legs, she pleaded, “Look, this is still the pantyhose with which I left.”

Other residents, who lived in a building close to Sur’s gate, said they were ordered to leave by YDG-H militants, who also blew up the building’s electric transformer.

As the crowd at the checkpoint grew, the police announced with a loudspeaker that no one would be allowed to cross and urged the people to disperse. Soon, the crowd dwindled. Mansur Izgi, too, walked away, grumbling. He had hoped to go to Sur to collect the belongings of his parents and siblings, who had taken shelter in his house.

For Izgi, the plight of his family and other Sur residents was little different from that of the refugees fleeing the civil war in Syria. “If they let us go, we’ll take my parents’ belongings and settle them in another place,” Izgi told Al-Monitor. “We’ve become refugees in our own lands. The Syrians came and Turkey took them in, but who is going to take us in?”

In another corner of Sur, throngs of panicked people made their way out, even though the expanded restrictions did not cover their neighborhoods. The exodus was triggered by rumors that the clashes would soon spread to that neighborhood. Better-off residents rented trucks to take along their belongings, while others hurried away with big bundles on their backs. The authorities sought to dispel the rumors, but few seemed to take notice.

Human rights groups estimate that some 30,000 residents of Sur, roughly a fourth of the district’s population, have fled, in addition to tens of thousands more displaced across the mainly Kurdish southeast, where urban clashes have been raging since the summer. According to a report presented at a recent meeting of the ruling Justice and Development Party, the clashes in Sur and the towns of Silopi, Cizre and Nusaybin, the main theaters of the fighting, have “affected” 220,000 people out of a total population of 439,000, caused 93,000 people to migrate and damaged 10,300 small businesses. The report said more than 520 PKK militants were killed, but it made no mention of civilian deaths, which the Turkish Human Rights Foundation put at 124 in late December.

Prime Minister Ahmet Davutoglu, for his part, said last week that 600 families were forced to flee their homes in Sur, promising financial assistance for their accommodations and reconstruction projects for the ancient quarter.

At present, however, the old city remains in the grips of deadly unrest and human suffering. On Jan. 29, the security forces seized the YDG-H’s largest weapons cache so far in a house in Sur. Five soldiers were killed and four others were wounded in clashes in the next two days, mostly by sniper fire.