Kurds on hunger strike for bodies of dead relatives

Kurdish families have launched a hunger strike to get the bodies of relatives killed while fighting with the security forces in Turkey’s conflict-ravaged southeast. 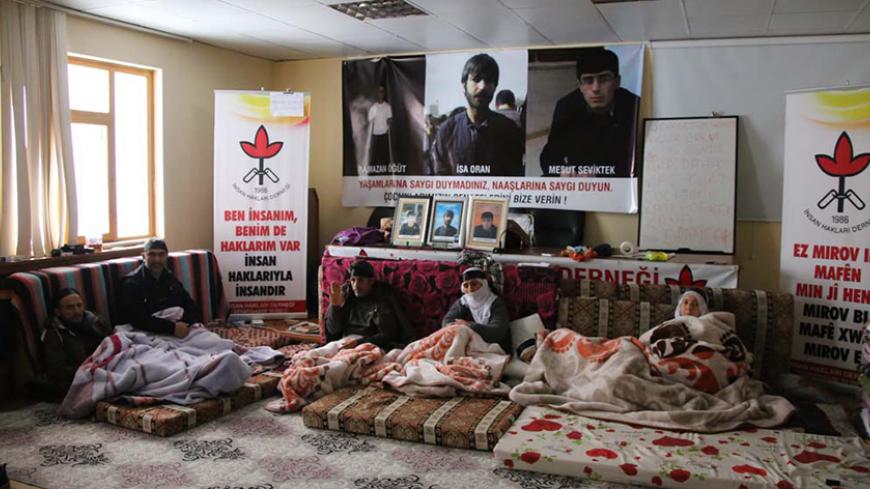 A group of Kurds have launched a hunger strike to demand the bodies of relatives killed while fighting with security forces, at the office of the Human Rights Association in Diyarbakir, Turkey, Jan. 6, 2015. - Mahmut Bozarslan

DIYARBAKIR, Turkey — “We were supposed to be receiving visitors for condolences now, but we are still trying to get our dead,” Mithat Ogut said bitterly. The middle-aged Kurd — visibly weak — is on a hunger strike. The reason: to press the authorities to let him have the body of his son, killed in clashes between the security forces and Kurdish militants that are raging in urban areas in Turkey’s mainly Kurdish southeast since summer 2015. His son's body, he believes, has been left in the streets in Diyarbakir’s historic Sur district, now a virtual war zone, cut off from the outside world amid round-the-clock curfews. Along with Ogut, five other Kurds have been on a hunger strike at the Human Rights Association’s Diyarbakir office since Jan. 1, demanding the handover of two other bodies from Sur.

According to Kurdish politicians and families, at least 55 other bodies remain unburied in Cizre and Silopi, two towns in Sirnak province that remain under curfew as the security forces battle Kurdish militants entrenched in residential neighborhoods. The dead are believed to include both civilians and militants.

The plight of families unable to retrieve and bury their dead adds another grim aspect to the humanitarian drama unfolding in the cut-off districts. Many fear that the brunt Kurdish civilians are forced to bear — illustrated most grimly by several families forced to keep their dead children in deep freezers — could irreparably damage the Kurdish sense of belonging to Turkey.

A deep sense of mistrust in the authorities lingered among the hunger strikers, wrapped in blankets in a cold and dim room — the result of power outages. Al-Monitor spoke to them on Jan. 6. The women alternated between praying and small talk, while the men told their plight to occasional visitors who came to offer moral support. They all looked weary.

Portraits of their killed relatives hang on the wall. The three young men — Ramazan Ogut, Mesut Seviktek and Isa Oran — were all militants of the Patriotic Revolutionary Youth Movement (YDG-H), the armed youth wing of the Kurdistan Workers Party (PKK). They were killed in clashes in Sur, where the security forces are trying to regain control, struggling with trenches and barricades the YDG-H has put in place to keep them away. The families believe their bodies are still lying in the streets in the besieged district.

For more than two weeks, Mithat Ogut has been trying to recover the body of his son, Ramazan, which, he believes, is abandoned at the Four-Foot Minaret, the ancient mosque where Tahir Elci, head of the Diyarbakir Bar Association, was gunned down in late November. “We’ve lodged an application with the prosecutor’s office. We want the bodies,” Ogut told Al-Monitor. “This is not compatible with Islam. The Religious Affairs Directorate must intervene. I’m appealing to the whole world and all Muslims to help us get the bodies.”

Ogut said the authorities had promised to call when they recover the body. “We are not even sure whether the body is still there. They might even take it and bury it somewhere,” he said, vowing to keep up the hunger strike “no matter what happens.”

Another hunger striker, Ihsan Seviktek, said the family had vainly sought help from the governor’s office, the prosecutor’s office and other local officials to retrieve the body of his brother, who was reported killed on Dec. 23. He confirmed his brother originally belonged to PKK units based in mountainous areas before recently joining the urban YDG-H groups. The authorities, he said, initially refused to acknowledge the killing and then said the ongoing clashes in Sur prevented the evacuation of the body.

“We’ve been told to fill the trenches so that they could go and take the body. We’ve also been told to get a car and go take the body ourselves. They wanted us to sign papers that they would not be responsible [if something happens to us there]. They are virtually telling us to go there so they could kill us,” Seviktek said. “It’s a shame for Turkey, it’s a shame for the world. Shame on those who speak of democracy, religion and faith. The body is only 500 meters [1,640 feet] away from here, not in some remote rural area. And for 16 days, the state has been refusing to give it to us.”

Isa Oran’s father, Mehmet Oran, also spoke of officials raising the issue of trenches in return for the bodies. “They tell us, ‘Remove the ditches and we give you the bodies,’ as if the parents dug those ditches and put their children there. That’s how they are threatening us,” he told Al-Monitor.

The families, he explained, fear that they, too, could be killed if they enter the conflict zone to retrieve their dead. “A medical worker was shot dead while helping a wounded person in Cizre. We are scared the same could happen to us,” Oran said. “We’ll do whatever it takes to get the bodies. It’s our humanitarian and moral right.”

Asked about the claims of the families, an official from the governor’s office told Al-Monitor that no obstacle existed to recovering the bodies. Speaking on condition of anonymity, he argued that evacuating the bodies was up to the local Kurdish-run municipalities. The governor’s office, he said, has approved all applications on the issue, but the applicants never came back.

The controversy reached parliament earlier this week. In a written question to Prime Minister Ahmet Davutoglu, seen by Al-Monitor, Sibel Yigitalp, a lawmaker for the pro-Kurdish Peoples’ Democratic Party, demanded answers to the following questions: “On what legal ground are bodies left in the streets of Sur and their handover to families and burial prevented? For what reason is the right of burial — a basic norm in the law of war — ignored and withheld from both the dead and their families by denying permission for burial procedures and leaving the dead in the streets for days? Preventing the burial of the bodies and causing them to decompose violates their physical and moral integrity, and given the moral values of our society, does this not amount to torture of both the dead and society itself? What purpose is being pursued with this? How many bodies have been left in the streets so far? What is the breakdown according to districts?”

The controversy, however, grew further on Jan. 7 with a regulatory amendment allowing the authorities to bury bodies unclaimed by families from the morgues for three days, which was reportedly a follow-up to an earlier government circular to prevent “funerals from becoming [venues for] terrorist propaganda.”

A total of 62 YDG-H members have been “rendered ineffective” in Sur — either killed or wounded — as of Jan. 2, according to the security forces. The security operations and clashes in the district are still going on, with the curfew now into its sixth week.