Members of the Patriotic Revolutionary Youth Movement, a youth group linked to the PKK, control the streets by force of arms in some parts of southeastern Turkey. 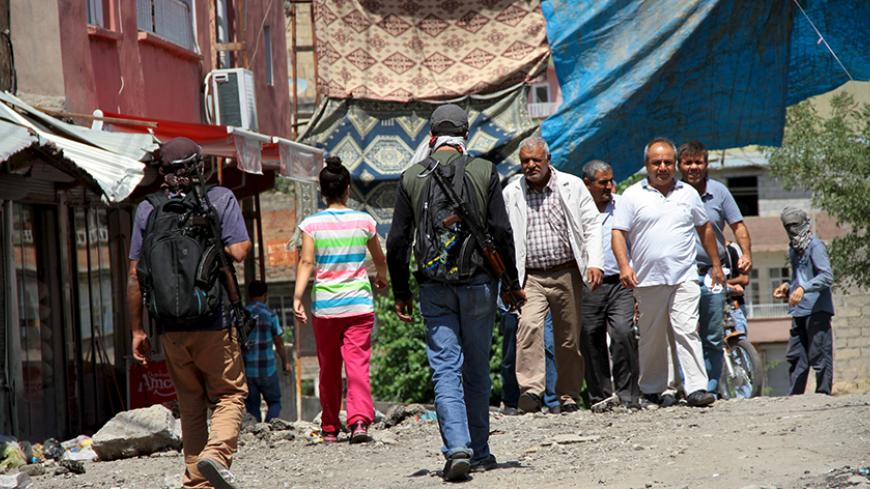 Armed members of the YDG-H (back facing), the supposed youth wing of the outlawed Kurdistan Workers Party, patrol a street in Silvan, near the southeastern city of Diyarbakir, Turkey, Aug. 17, 2015. - REUTERS/Sertac Kayar

BISMIL, Turkey — There is a street in the town of Bismil, in Diyarbakir province, whose entrance is covered with large drapes. Behind the barrier, a group of young people is armed with Kalashnikov rifles. Their faces are covered, with only their eyes visible. Their average age is about 20. Two young girls lead them. One says her name is Sara, and the other is Jin. They constantly give orders to people around them.

Armed youngsters appear to control this street. They drive back and forth in cars they seized from residents. Cars bring in food and boxes that appear to contain ammunition. One masked boy who calls himself Vandetta scans the area with binoculars. Then Jin arrives and says it is her turn to stand guard.

Jin answered Al-Monitor’s questions. She said the group started taking action because of incidents in the region. “The state, under the pretext of a solution process, stalled the Kurdish people for 2½ years. We reject [this],” she said.

Like many settlements in the region, Bismil has seen a lot of fighting. The militants have dug ditches in the streets and put up barricades to keep the police out. There have been fatalities among militants, security forces and civilians. The latest civilian fatality was Elif Simsek, 9, who was killed when a rocket hit her house. The governor’s office said Simsek was killed by a rocket fired by the Patriotic Revolutionary Youth Movement (YDG-H). Jin denied it.

Another scene of heavy YDG-H activity is the town of Cizre. After an eight-day curfew, that town was quiet as of this writing.

But ditches and barricades on the streets are still there. Some of the ditches are rigged with explosives. A young man named Sipan we met on the street who identified himself as a YDG-H fighter said the group resorts to such actions to avoid arrest. “They come and arrest us with slightest excuse," he told Al-Monitor. "We won’t let that happen [anymore]. We go to a protest; they detain us. I was in prison for months because I carried a flag during the election campaign.”

When in action, they always cover their faces. People refer to them as "the youngsters." The public first learned of them from photos of a ceremony the group organized in Cizre on June 24, 2013, to announce its formation.

Nearly 90 young people participated in that ceremony, wearing black T-shirts bearing a portrait of Abdullah Ocalan, the imprisoned leader of the Kurdistan Workers Party (PKK), and inscribed “YDG-H Public Order." A similar ceremony was held a month later in the town of Diyarbakir’s Fiskaya neighborhood.

Before long, branches of the group appeared in many provinces and towns of the region. Naturally, the state took notice.

The YDG-H actually dates back to 2012. Under the title “The PKK’s Fourth Strategic Struggle Phase,” the organization declared its intention to develop urban guerrilla operations by initiating a “revolutionary popular struggle.” The idea was to bring clashes down from the mountains and into the cities. At that time, members were saying the organization’s goal was to compel the state to a solution, and if the solution process did not work, to start urban warfare by preparing for street battles.

Huseyin Turhalli worked with the PKK for many years and took part in its administration. Turhalli, now settled in Europe, said the YDG-H is ideologically affiliated with the PKK, but they have no physical links. Yet, he told Al-Monitor, the YDG-H cannot refuse the PKK’s supervision.

“They will definitely obey any statement the PKK issues. They are subject to supervision; don’t think otherwise," Turhalli said. "They are autonomous, but at the end there is supra authority they are subservient to. If there is a cease-fire they will surely respect it. The only problem is, if they are penetrated by intelligence services they may for a while be bereft of control from above. It is highly likely that the [Turkish intelligence service] MIT has penetrated them. But [its] influence is limited and easy to eliminate.”

Murat Karayilan, who leads the armed wing of the PKK, refused to acknowledge ties with the YDG-H. ‘‘My assessment of the YDG-H is that it is a new force that had itself recognized by us, by the public and the state with its own actions. It is a manifestation of the new will of the Kurdish youth,’’ he said.

But Vahap Coskun, an associate professor of Dicle University's faculty of law, dismisses claims that the two organizations are not linked. He told Al-Monitor the PKK might have set up the YDG-H to retain its base of young people in the streets and to exert pressure on its opposition. According to Coskun, to achieve a democratic solution to the Kurdish issue, this structure must be eradicated immediately.

“If the PKK really wants the democratic process to move forward, the most crucial step it can take will be to abolish the YDG-H. That outfit has become a structure that seriously harms people. To give guns to youngsters in towns, with child-age ones walking the streets with guns in their hands claiming to keep law and order, cannot benefit the Kurds. It is not acceptable. It is definitely a harmful structure, and we are seeing the results," said Coskun.

Coskun added, "It is hampering politics. When you use the YDG-H in clashes, politicians leave the scene. Think of the HDP [pro-Kurdish Peoples’ Democratic Party] presence in the public arena before the elections and their situation now. It is as if they ceased to exist. They have withdrawn totally because what we have are clashes, and clashes are performed by those with guns. In this case it is YDG-H with the guns, and their words count.”

The YDG-H, which made a name for itself in recent years by cutting off roads and forcing shopkeepers to strike, ended such actions after a strong warning by the PKK following widespread criticism. In the early 2000s, the PKK also formed a paramilitary force called the Teyrebazen Azadiya Kurdistan. It, too, was shut down when its actions were criticized.