PKK looks to the future with creation of youth militias

Spiraling urban violence is spearheaded by the PKK’s young militias. 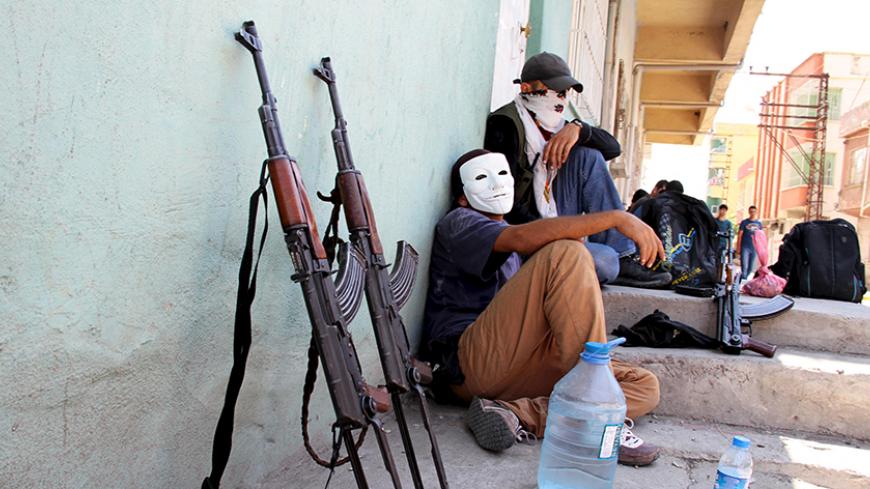 Masked members of YDG-H, the youth wing of the outlawed Kurdistan Workers Party, sit next to their weapons in Silvan, near the southeastern city of Diyarbakir, Turkey, Aug. 17, 2015. - REUTERS/Sertac Kayar

In a phone interview with Al-Monitor, Cekdar Gabar, 19, a Kurd from Cizre who didn’t want to use his real name, said, “We didn’t have a defense force to protect our people in cities. As YDG-H [Patriotic Revolutionary Youth Movement], we filled that void. Youth is more organized and aware now. We started by taking an oath to protect the Kurdish people against the state’s oppression. In the old days, our youth was afraid of the state and ran away. Today, hundreds of youth push aside the barbed wire in front of soldiers and join the Kobani resistance. These are all benefits of our getting organized. Let everyone know that we have answers to everything the state can come up with.”

Gabar said he was a high school graduate. At the end of the 1990s when his village Gulesli was forcibly evacuated, his family had to migrate to Cizre. People of Cizre who call themselves the “true people of Cizre” denigrated them and resented their presence in the town. Nine people of his family have lost their lives in clashes in the last 20 years. Gabar worked as a seasonal laborer in construction and in agricultural fields and is now unemployed. He is no longer a traditional villager, but he also is not urbanized. He sought acceptance by joining YDG-H, the youth wing of the Kurdistan Workers Party (PKK).

Ahmert B. of Sirnak, 18, has a similar story. In a phone interview with Al-Monitor, he said, “In the 1990s, three to four teams of JITEM [a secret anti-terror military unit] were raiding houses, taking away whoever they wanted and then executing them without a trial. Should the state revert to those days, we are prepared to confront them. We are in cities to protect our people against the state and will remain there.”

Both young men were compelled to migrate to cities, had economic problems, were unemployed and had wanted to assume an urban identity by joining the PKK’s youth wing.

These young people who started out as members of the PKK’s youth groups in cities are now spearheading the PKK’s fight with Turkish security forces. PKK’s young armed militants who are getting increased mention in the foreign media are the third generation of Kurds fighting since 1984. They are now on the PKK front lines in clashes with Turkish security forces that violently resumed in July.

Researcher Ata Altin of Sirnak, known for his writing on Kurdish issues, told Al-Monitor that the young generation in the 15-25 age group, which makes up the YDG-H, is much more radicalized and more unwilling for dialogue than earlier generations. Altin said every time they get together, all they talk about are the traumas of unsolved murders and reports of torture under detention. They are in awe of heroism legends and myths of PKK fighters, and they adopt the most violent, self-sacrificing militants as role models. Altin added, “Their strongest argument is that in the past Kurdish residents of cities were oppressed because they didn’t have a force to protect them. Now YDG-H is getting armed in cities. Instead of the stones they had in their hands in the1990s, now they have heavy weapons such as machine guns and RPG-7s. It is a matter of time before these youngsters will be armed with anti-tank missiles and portable short-range air defense missiles, which will come over from Syria.”

For Altin, the solution is for the pro-Kurdish Peoples’ Democratic Party to become stronger in politics and entice radical groups to civilian politics. Altin fears that these young militants are motivated also by the desire for revenge or a sense of excitement. He is worried that these youth groups, which can finance themselves through extortion, can in the future become organized crime. Altin believes that the “self-government” these groups are trying to implement in towns in east and southeast Turkey cannot constitute the model for a new order in the country. He said these groups know well what they don’t want but are confused as to what they do want. They all come up with different answers when you ask them.

Ceyhan said organizations would like their young members to use the social media for ideological indoctrination, but the youth use them mostly for relations with the opposite sex, communication, football, learning the world and developing their hobbies. Ceyhan has other observations:

After listening to the angry tirades of YDG-H youngsters and research by Altin and Ceyhan, I can’t help but recall the words by Serafettin Elci, an important and respected Kurdish politician who passed away in 2012. His famous dictum was, “We are the last generation you are going to negotiate with. After us, you will confront an angry youth that has grown up in war.”

This 15-25 age group in the Middle East, which is tougher and more prone to radicalization, should be offering the regional decision-makers a vital naked truth: The people you are negotiating with now may well be the last generation that will be open to dialogue.