Turkey drawn into vortex of violence

A sudden escalation of attacks against police and the military after the Suruc suicide bombing prompts fears that the cease-fire with the Kurds has ended. 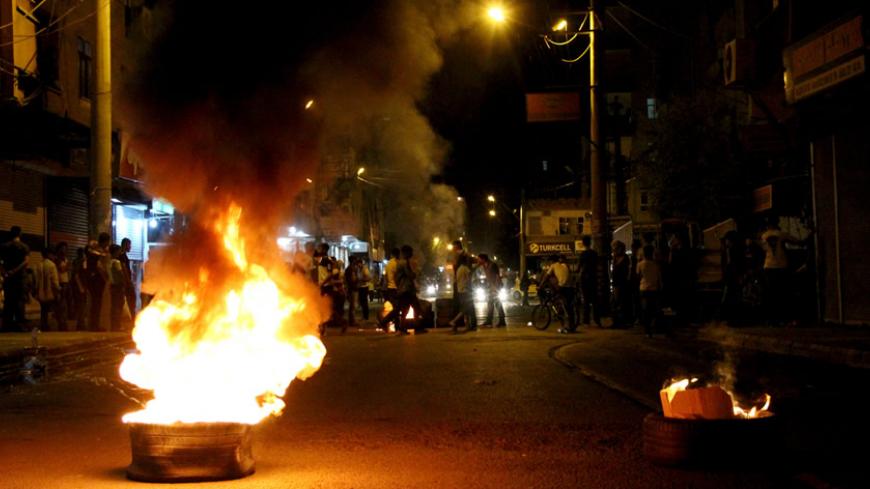 Demonstrators burn tires to block a street during protests against the bomb attack in Suruc, in the Kurdish-dominated southeastern city of Diyarbakir, Turkey, July 21, 2015. - REUTERS/Sertac Kayar

Before Turkey had come to terms with the shock of the suicide bombing that killed 32 young activists in Suruc on July 20, news arrived that two policemen had been executed in their sleep in the town of Ceylanpinar, also in Sanliurfa province.

Soon after the murders on July 23, the Kurdistan Workers Party (PKK) claimed responsibility. The PKK accused the policemen of being in contact with the Islamic State (IS) and said they were executed in retaliation for the Suruc suicide bombing. Less than 24 hours later, two traffic policemen were attacked and wounded in Diyarbakir after having been lured to investigate an accident. One of them died in the hospital.

More attacks against police then followed in other parts of the country: Seven policemen were wounded in an attack in the town of Bismil in Diyarbakir province; a rocket-propelled grenade hit a police armored vehicle in the town of Semdinli in Hakkari province and wounded two policemen; a police station in the city of Siirt was strafed with rifle fire; a police patrol in Nusaybin in Mardin province came under fire; and a police station in the city center of Diyarbakir was attacked.

The PKK — which refrained from violence in the run-up to the elections, despite all the tension — now has resumed attacks against the police in cities in different parts of the country. While the PKK leadership has not declared the end of the cease-fire, it frequently says it has become meaningless.

Attacks against the police continued in Istanbul and elsewhere on July 25. But the attack against the paramilitary force on the evening of July 25 near Lice that killed two noncommissioned officers and wounded four soldiers is set to significantly increase Turkish military operations against the PKK. The gendarmerie detachment had been dispatched to remove a PKK roadblock on the Diyarbakir-Bingol highway when an abandoned car that was rigged with explosives detonated. The region is now bracing for the inevitable retaliation by the Turkish military against PKK targets.

Daily Milliyet reported that 75 Turkish air force jets flew 155 sorties between the evening of July 23 and the morning of July 26 against roughly 400 PKK targets. The planes used laser-guided missiles in addition to MK-82 bombs.

Do these renewed attacks mean that the peace process and cease-fire are done with? We asked Huseyin Turhalli, who knows the PKK intimately. Turhalli told Al-Monitor that neither the state nor the PKK believe in the peace process. "There was a de facto cease-fire between the parties because of events in Syria. The PKK prioritized Rojava as a strategic move. The Turkish state, however, wanted to drag the PKK into the Syrian morass and finish it off there. But the state’s calculations turned out to be incorrect. The PKK, instead of disappearing, grew both militarily and politically, and the state has been developing a new strategy. The Jarablus-Karakozak-Marea area will be placed under Turkish military control, Syrian Arab refugees will be settled there and this will prevent the linking up of the Kurdish cantons of Afrin and Kobani. Violence will marginalize the Peoples’ Democratic Party [HDP], which won’t be able to overcome the election threshold in an early election and a strengthened AKP [Justice and Development Party] will again be in control. Will this work? I don’t think the circumstances are conducive to such a scenario," he said.

Turhalli, however, thinks the recent spate of attacks involve local initiatives carried out by local forces without orders from above.

However, former parliamentarian Sedat Yurtdas, who was one of the first Kurdish politicians in the parliament, doesn’t think the violence will decrease. Yurtdas told Al-Monitor that the violence has become a tool for getting votes. He stressed that the air force raids, barrages and attacks against the police will not produce any results, and that this violence must end immediately.

Vahap Coskun, associate professor in the faculty of law at Dicle University believes the PKK will not allow any other actor to gain prominence in the Kurdish scene. Coskun told Al-Monitor that the HDP had not been able to deliver what was expected of it despite its election success. He said, "By saying so, they both served a notice to the HDP and showed that the reins were in the PKK’s hands. The PKK also revised their imprisoned leader [Abdullah] Ocalan’s views by saying, ‘Ocalan no longer wants us to give up our weapons.’ The PKK’s command in the Qandil [Mountains] thinks that the current situation offers the Kurds a major opportunity. They really believe that reverting to confrontation will serve the PKK much better than pursuing the peace process. They feel they have achieved gains in Syria, have established contacts with international bodies, are liaising with the US and won international sympathy. They think that because they are fighting IS the Western public opinion’s support will continue. But if the PKK resumes fighting Turkey it cannot keep up such relations with the world. The US is still Turkey’s most important ally. It announced it is standing with Turkey against terror. A PKK fighting with Turkey might face a different US attitude."

Coskun was alluding to the initial official US reactions by the spokesmen of the National Security Council and the State Department justifying Turkey’s right to self-defense against PKK operations.

Coskun said the peace process has not fully ended yet. "That will be decided by what the state and the PKK will do from now on. You cannot simply dismiss what has been achieved. People have seen that the issue can be solved through negotiations,” he said. Coskun added that the PKK must immediately revert to a state of nonhostility, warning that otherwise there is a grave danger of internal conflict in the country. The current PKK violent attacks across Turkey might result in civilian casualties that will pit the Kurds against the Turks.