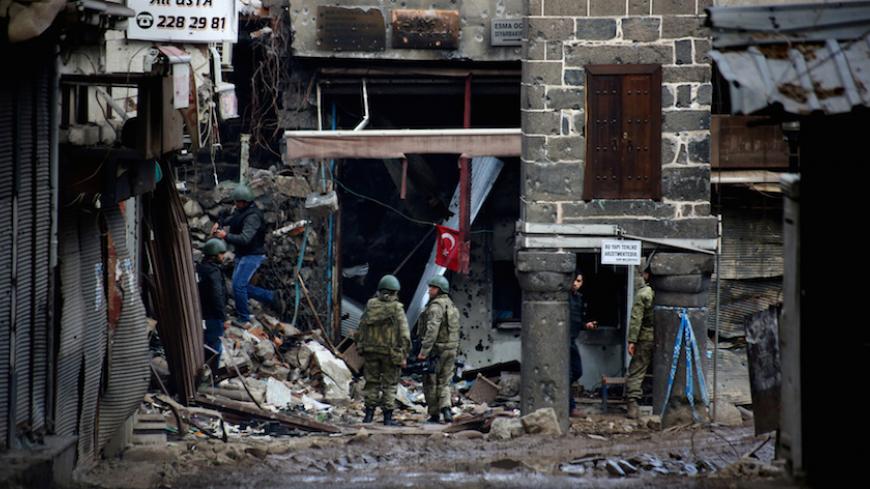 DIYARBAKIR, Turkey — Kurdish lawyer and rights activist Muharrem Erbey was among thousands of people who landed behind bars in 2009 as part of a massive probe into an alleged Kurdish separatist network. The persecution of Kurdish activists was hardly a novelty for Turkey, but the way Erbey learned of the court’s arrest ruling was truly unusual, if not Kafkaesque.

“We had just left the prosecutor’s room [after questioning], and before the prosecutor had made any decision, Samanyolu TV reported we had been arrested,” Erbey told Al-Monitor, referring to a channel linked to the Gulen community. “The prosecutor was unaware, but Samanyolu TV was already running a news ticker.”

The channel no longer exists, shut down as part of a draconian clampdown on the Gulen community, which Ankara holds responsible for the botched coup bid last month and accuses of having run a “parallel state” through high-placed followers in the public service, especially police and judiciary.

Even before the coup bid, the government had conceded that Gulenist policemen, prosecutors and judges colluded to “frame” hundreds of soldiers in sham trials, using fabricated evidence that a plot was underway to plunge Turkey into chaos and topple the ruling Justice and Development Party (AKP).

Erbey, who spent almost five years in jail, sees a similar pattern in his own trial, which was part of a broader probe into the Kurdistan Communities Union (KCK), a Kurdish umbrella organization that includes the armed Kurdistan Workers Party (PKK). Like the majority of his co-defendants, Erbey was known as an advocate of a peaceful solution to the Kurdish conflict and headed the Diyarbakir branch of the Human Rights Association at the time.

The lawyer believes that Gulenist police and judiciary deliberately targeted moderate Kurds to undermine any prospect of a peaceful solution and discredit the government.

Fresh peace overtures had begun in March 2009, with then-President Abdullah Gul saying “good things are going to happen” regarding the Kurdish problem. Soon the PKK declared a cease-fire, raising hope that a serious peace effort was underway. In mid-April, however, police began rounding up suspects as part of the KCK probe. The crackdown stirred confusion over Ankara’s intent as thousands of Kurdish politicians, including mayors, party leaders and other well-known figures, landed in jail.

The government claimed the KCK was the PKK’s tool in building a “parallel state” in the Kurdish-majority southeast, while the defendants argued the operations were orchestrated by Gulenists. The Gulen community was still the AKP’s main ally at the time, and though the mass arrests marked a big “train crash” in the settlement process, the Kurdish claims fell on deaf ears.

Erbey shares the widespread conviction that the Gulen community has a nationalist leaning and is hostile to the Kurdish political movement. According to him, the Gulenists played a double game — they persuaded the government the KCK was dangerous and enlisted its support for the operations, but their underlying objective was to derail the settlement process.

“By arresting moderate figures, they hoped to fan violence and paralyze the government’s peace efforts,” Erbey told Al-Monitor. “Everyone — the AKP, the government and even the man in the street — knew the [Gulen] community had infiltrated the judiciary. All decisions were taken jointly by the government and the community, but on the implementation level, the police, the prosecutors and the judges were all Gulenist elements.”

Echoing a widespread belief in Turkey that Fethullah Gulen, the US-based cleric leading the sect, is an American cohort, Erbey argued the Gulenists sought to blow up the settlement efforts in a bid to internationalize the Kurdish conflict and pave the way for some kind of US involvement.

“The community did many things in tandem with the AKP, but they were against an AKP-led solution of the Kurdish problem. The prevailing approach was to sideline the AKP in favor of some solution through the community and the United States,” he said. “And we, the people of this region, had always warned that outside forces could come into play and take the problem to a very different dimension if Turkey and the Kurds fail to resolve the problem between themselves.”

Another crisis broke in February 2012 as a senior prosecutor — now a suspected Gulenist on the run — made an unsuccessful attempt to question and possibly arrest senior intelligence officials over secret meetings with the PKK, which is officially designated as a terrorist group by Ankara.

Vahap Coskun, an academic at Diyarbakir’s Dicle University and a former “wise man” in the settlement process, also believes the Gulenists sought to sabotage the peace efforts, but has a different explanation.

In Gulen’s view, he said, the process “flouted the dignity of the state” because the PKK was accepted as an interlocutor and thus emboldened to act as a “parallel state” in the southeast. “So, Gulen was opposed to the government trying to resolve the problem by talking to the PKK. The Gulen community had long objected to this policy,” Coskun told Al-Monitor. “The KCK operations in 2009 and the February 2012 incident should be seen in this context. Using its clout in the judiciary and the police, the Gulen community sought to undo the government’s policy and did not hesitate to mobilize all its power for that purpose.”

The stumbling peace process ultimately collapsed in July 2015, but this time President Recep Tayyip Erdogan was widely believed to have his own political reasons to abandon the talks and crack down on the PKK. His decision was preceded by the killing of two policemen in Ceylanpinar, at the Syrian border. The PKK claimed responsibility for the attack, but later the claim was retracted.

Some now suggest that a Gulenist finger is possible in this incident as well, for some judicial officials involved in the probe had been linked to the Gulen community. In remarks to Al-Monitor, Huseyin Akay, a defense lawyer in the case, cast doubt on the allegations, but asserted the nine defendants were innocent. “The indictment of those guys has prevented finding the real culprits,” he said. “Yet, my personal conviction is that [a link to the Gulenists] does not exist.”