Some fear the increasing AKP-inspired allegations of a relationship between the PKK and the Gulen movement may be a harbinger of a new round of attacks on Kurds. 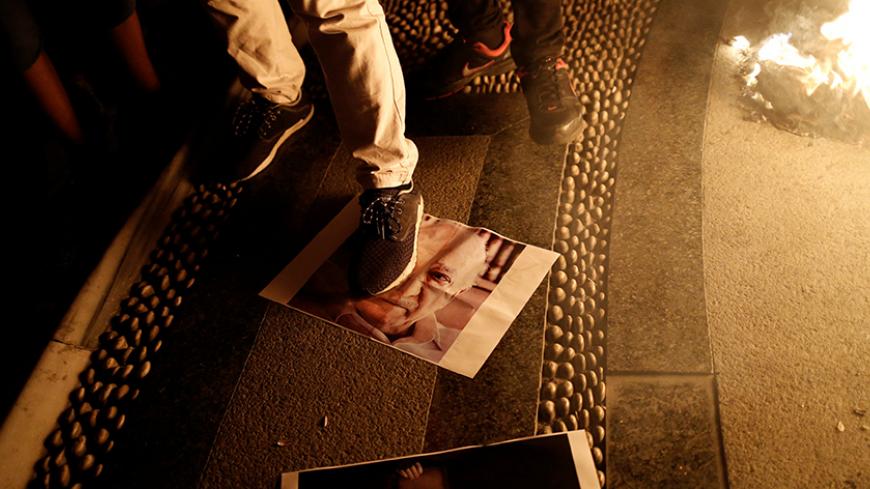 A supporter of Turkish President Recep Tayyip Erdogan steps on a photo of US-based cleric Fethullah Gulen during a pro-government demonstration at Taksim Square in Istanbul, July 18, 2016. - REUTERS/Alkis Konstantinidis

Turkey's Justice and Development Party (AKP) government, which stepped up operations against the Fethullah Gulen movement after the July 15 coup attempt, is now accusing Gulenists of being responsible for many unpleasant events from the recent past. Pro-government media is working overtime to charge Gulenists with many nefarious deeds, including the killing of 34 Kurdish villagers by the Turkish air force near Roboski village on Dec. 28, 2011, the assassination of Armenian journalist Hrant Dink and even the shooting down of a Russian warplane last year.

Interestingly, it was AKP officials who blocked finding those responsible for the Roboski massacre, promoted those who were implicated in Dink's murder and applauded the shooting down of the Russian plane with glee.

The opposition is aware of the game and is reacting sharply to the AKP's efforts to cleanse its past by holding Gulenists responsible for the above incidents and others. Peoples' Democratic Party chairman Selahattin Demirtas, who was the only party leader not invited to the mass rally Aug. 6 in Istanbul, said it best with this sarcastic comment: "Without a letter of recommendation from the [Gulen] movement, someone wasn't even allowed to become a class president in school."

The AKP's repositioning of the blame has reached preposterous levels.

Can Gurkan, the chairman of Soma Coal Mines Corporation, who is the key defendant in the Soma mining disaster that killed 301 workers, tried to defend himself by saying in court, "Our country is under the attack of the PKK [Kurdistan Workers Party], FETO [which stands for Fethullah Gulen Terror Organization, a term that Ankara uses for Gulen and his followers] and DHKP-C [Revolutionary People's Liberation Party-Front]. These are the organizations behind the Soma incident."

Another amazing attempt came from Ahmet Ozal, the son of Turkey's eighth president, Turgut Ozal, who died under mysterious circumstances on April 17, 1993. Ahmet Ozal said the Gulen movement was implicated in his father's death.

Mind you, the younger Ozal is known for his propensity to find different culprits for his father's death depending on prevailing atmosphere. During the Gulen movement-led "Ergenekon" trials, he had accused the "deep state" of murdering his father.

One of the more interesting allegations against the Gulen movement after July 15 came from Mehdi Eker, the deputy chairman of the AKP. Eker said it was the Gulenists who sabotaged the peace process with the Kurdish political movement. But Yasin Aktay, another AKP deputy chairman, uttered a contradictory allegation and said Gulenists were never in an active struggle against the PKK; at any rate, on July 15, the PKK and Gulenists had an understanding, according to some in the AKP.

It didn't take long for the pro-government media to follow up with sensational allegations of relations between the PKK and Gulenists. These allegations reached such exaggerated levels that they even claimed 60 soldiers — including three generals — had crossed the border and taken refuge with the PKK in northern Iraq. The office of the Chief of General Staff had to issue a denial that nothing of the sort happened.

We have to remember that the first person to claim the existence of good relations between Gulenists and the PKK was former Prime Minister Ahmet Davutoglu, who is not seen around these days. On Dec. 9, 2014, Davutoglu had said, "The organization [PKK] is working together with the parallel structure [Gulenists]. We know who is talking to whom. We have documents attesting to this."

Hatip Dicle, a former Kurdish parliamentarian who was in the delegation that met with the PKK's imprisoned leader Abdullah Ocalan, told Al-Monitor, "We knew about this effort. Ocalan said that they wanted to establish relations with Fethullah Gulen so that they [the Gulenists] wouldn't block the solution process. We sent that message to Gulen but it was refused. We give interviews to all newspapers but have a special ban against the Gulenist media. We never gave interviews to them, never invited them to our press conferences and events. The contradiction between the Gulenists and the Kurdish movement is clear.”

Dicle, who was one of the leading political actors arrested in April 2009 in the infamous operations against the Kurdistan Communities Union (KCK), added, "The Kurdish movement is the last organization that should be accused of being in cohorts with Gulenists. Ocalan had a very clear stance against Gulenists. In all his meetings Ocalan warned about the [Gulen] movement's penetration of the state between 2013 and 2015, when the movement did everything possible to block the solution process. Ocalan used to say often that NATO's secret Gladio scheme and the movement had roles in the murder of the three female Kurdish politicians in Paris."

Dicle also revealed that during the 2009-2013 solution process, a group of religious figures contacted the Gulen movement and asked them to put an end to anti-Kurdish propaganda on their TV channels. But this, too, was refused.

So why is the AKP determined to show the Gulenists working with the PKK? Dicle has an interesting explanation, saying, "Tomorrow they will turn against the Kurdish movement. They are manipulating Turkish society right now to prepare the ground. We are not that naive, we have years of experience. Today, the AKP says they are struggling against the Gulen movement but soon they will turn against the Kurdish movement. This is obvious."

Cuma Cicek, an assistant professor of political science at Mardin Artuklu University, said the charges of a PKK-Gulenist relationship is the signal of coming AKP pressure on the Kurdish movement. Cicek told Al-Monitor, "This narrative enables the AKP to mobilize its constituents. It makes it easier to send people to the streets, to create legitimacy in their eyes and create approval. This narrative also engenders a certain functionality, legitimacy against international actors."

Cicek interprets the allegations of a relationship between the PKK and the Gulenists as follows: “In anti-KCK operations, Gulenist police and judges led the campaign against the Kurds. Gulenists were even more prone to violence than the government. Moreover, we see that many military commanders who were involved in urban warfare in the southeast were also active in the July 15 coup attempt. The [Gulen] movement became a key actor advocating violence in the past year. But I am not saying that they are following their line independent of the government. Both in anti-KCK operations and urban warfare everything was done under guidance and support of the government."

Journalist Ahmet Sik, who was detained and then arrested on March 3, 2011, for writing the book "Imam's Army" — which exposed the Gulen movement's infiltration of the police — said claims of a relationship between the PKK and the Gulen movement are "absolute nonsense."

For Sik, anti-PKK operations that were launched on July 24, 2015, are in line with the Gulen movement's reports to the AKP when they were allies. He told Al-Monitor, "The goal was to eradicate the mountain cadres of the PKK, to detain the ones on the plains and to fill the vacuum left behind by the disintegrating Kurdish political movement with Gulenists. The idea was to transform the people in the area controlled by the [Gulen] movement to become AKP voters."

Unlike Dicle and Cicek, Sik thinks the government will have to take some positive steps on the Kurdish issue soon. He said, "Not a very bright light but there is some light nevertheless." He feels the pressure from international forces in Syria may push the AKP to take such positive steps. While many people feel the claim of Gulen-PKK relations is the harbinger of a new wave of attacks on the Kurdish movement, many others seem to be saying, "Let's wait and see."