A wave of terrorist attacks in Turkey has claimed hundreds of innocent lives, but never the armchairs of government and security officials. 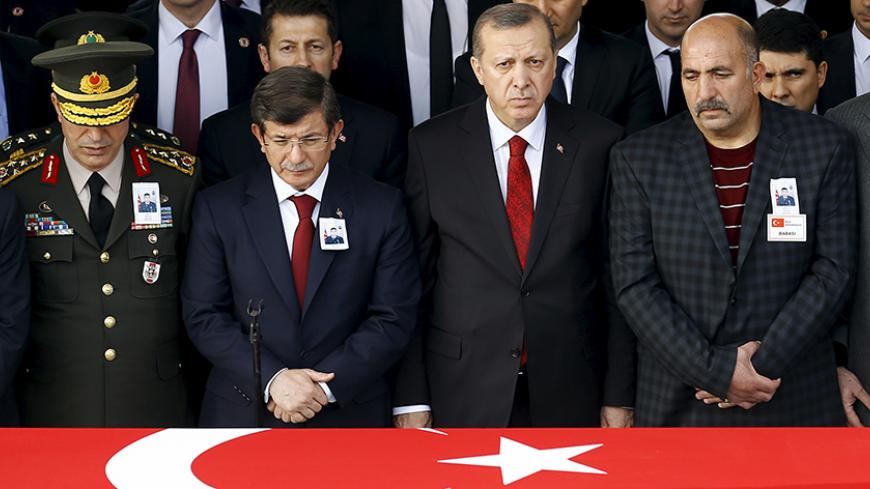 Over the past year, 12 large bomb attacks, the last at Istanbul’s main airport June 28, have rattled Turkey, claiming close to 300 lives and leaving some 1,500 people wounded. The one-year timespan is not chosen casually here as the unprecedented wave of bloodshed started after the June 7, 2015, election in which the Justice and Development Party (AKP) lost its parliamentary majority for the first time since coming to power in 2002. President Recep Tayyip Erdogan argued at the time that a coalition government would mean instability, and, through various machinations, blocked any such prospect, forcing new elections on Nov. 1. The tactic worked. The AKP restored its majority and returned to power alone. Yet, far from receding, the spiral of violence has only intensified since then.

The bloodiest attacks have been blamed on or claimed by the Kurdistan Workers Party (PKK) and the Islamic State (IS). Meanwhile, another “terrorist organization” has been omnipresent in government rhetoric — the followers of US-based Turkish preacher Fethullah Gulen. Ankara’s history with these three groups is crucial for understanding Turkey’s current security turmoil.

Here is a brief overview:

Up until spring last year, the government was engaged in a “settlement process” with the PKK. The initiative attracted much criticism — not only because Ankara was negotiating with a group it designated as a terrorist organization, but also because of the shroud of secrecy that cloaked the issues under discussion. The main opposition, for instance, argued the Kurdish conflict should be resolved on a parliamentary platform to ensure a broad-based consensus on the country’s gravest problem. The AKP dismissed the objections, portraying critics as political vampires who opposed peace and sought to feed off the conflict.

After the talks collapsed, Erdogan himself admitted that governors in the southeast had been instructed to tolerate the PKK’s illegal activities and the militants “exploited” the lull to smuggle weapons into Turkey. It turned out that military commanders in the region had sought permission for security operations at least 290 times in 2014 alone, but the requests were granted only on eight occasions. As a result, the PKK was able to stockpile weapons and explosives in urban areas, which it has been using amply since the conflict resumed in July 2015.

The AKP government jumped headlong into Middle Eastern politics and took sides in internal conflicts, ignoring warnings that this was a dangerous departure from Turkey’s long-established policy of caution in the region. Since Syrian President Bashar al-Assad turned from a friend to an enemy overnight, Turkey has faced myriad accusations such as providing passage for jihadis and supplying weapons to radical groups in Syria. The AKP’s domestic critics were this time accused of supporting “Assad, the murderer.” The government seemed little perturbed as ample signs emerged of IS-linked networks and recruitment in Turkey. Even an open gathering of IS sympathizers in Istanbul last summer failed to spur the government into serious action.

Turks became acquainted with "parallel terrorists" after a massive corruption probe rattled the government in December 2013. According to the AKP, the police and prosecutors involved in the probe belonged to a “parallel state” set up by the Gulen community, which was now seeking to topple the government. This marked the end of the AKP’s 11-year alliance with the community, which faced a fierce onslaught in every realm of public life and landed on the list of terrorist groups. The Gulenists’ entrenchment in the state had long been an issue of controversy in Turkey, but the AKP again claimed ignorance. Erdogan keeps pledging the “parallel state” will be fully dismantled, but many warn that the purge in the police, which has been particularly ferocious, has swept away also years of institutional experience in countering terrorist groups.

Despite all this background, the AKP takes no responsibility for the consequences of its actions and, moreover, tries to blame the opposition. Following the June 28 carnage at Istanbul’s Ataturk Airport, for instance, AKP deputy Mehmet Metiner rushed to blame the PKK, which he described as the “friends” of main opposition leader Kemal Kilicdaroglu. Not only did he face no reprimand, he appeared on the parliament’s rostrum the following day to speak on behalf of the AKP.

Without any self-criticism, the AKP simply vows to crush “the enemies” — the very groups it befriended or tolerated yesterday — as the price Turkey pays continues to rise.

The list of terrorist attacks since June 2015 starts with the bombing of a pre-election rally in Diyarbakir on June 5, which claimed five lives. IS was held responsible for the attack, as were the following bombings thereafter (the first two in 2015 and the remainder in 2016):

Kurdish militants, meanwhile, have been responsible for the following blasts in 2016:

Here, it is worth recalling how Erdogan berated US President Barack Obama after three young Muslims were shot dead in North Carolina last year. “I’m calling on Mr. Obama, asking 'Where are you, president?' We, politicians, are responsible for the murders that take place in our countries,” he said. “We have to take a stance because when people vote for you they entrust you their security.”

But what about Turkish officials? Has anyone taken political responsibility for any of the bloodshed? No. After the airport attack, for instance, Prime Minister Binali Yildirim was quick to rule out any security lapse.

So the terrorist attacks in Turkey claim innocent lives, but never the armchairs of government and security officials. Interior Minister Efkan Ala has removed no one from office so far, while resignations are something unheard of. And with the Turkish media largely muzzled, a meaningful public debate to exact accountability is virtually nonexistent. In this area, the government has outdone itself. Media blackouts and restrictions on social media have become a routine in the aftermath of bombings, so much so that some have been in place even before the injured could be taken to hospital.

Another AKP hallmark in this context is the constant blaming of opposition parties, which keeps society polarized and distracts attention from the real issues. This tactic may have worked in removing pressure off the government, but contributes nothing to reining in the violence as what went wrong is never really debated.

Al-Monitor contacted three former interior ministers for comment, and their reactions came as further evidence of how much free debate is suppressed. Two of them declined to comment out of hand, while the third one, who spoke on condition of anonymity, pointed only to the merits of resignation as a means to allay the public and motivate successors to work more diligently.