For the first time in 13 years, Turkey is headed into elections in an environment of bloody conflict with the PKK — a deliberate political choice on the part of the government. 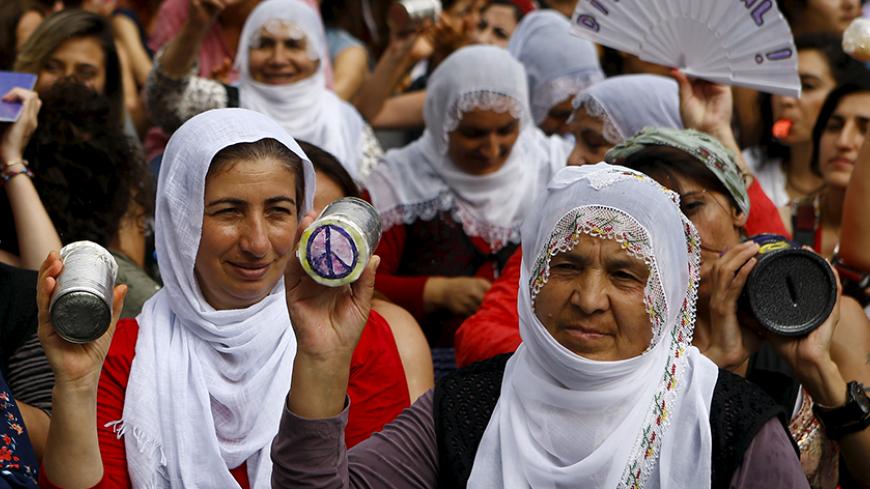 Turkey is heading to snap elections Nov. 1 after a coalition or minority government could not be formed in the wake of the June 7 elections that ended the parliamentary majority of the Justice and Development Party (AKP). Under constitutional rules, a cross-party interim government, which is yet to be formed, will rule the country until the elections.

The pre-election environment this time is distinctly different from earlier ones. For the first time in 13 years of AKP rule, Turkish elections will be held against the backdrop of violent confrontations between government forces and the Kurdistan Workers Party (PKK). The era of nonhostility since fall 2012 ended July 24 with massive Turkish air raids on PKK targets in the Qandil region of Iraq’s Kurdistan Regional Government (KRG).

Reports indicate close to 60 members of the security forces were killed in PKK attacks from that date until Aug. 22. On the other side, the official Anatolia News Agency reported Aug. 22 that 812 PKK militants had been killed since July 22 in both Turkey and Iraq.

In stark contrast to the current picture, all other elections since Nov. 2, 2002, when the AKP came to power — three local, three general, one presidential and two referendums — were held in environments of a cease-fire or nonhostility agreement between the PKK and government forces. The security of election campaigns and voting booths was never threatened. Arguments such as the need to “assert government authority” or meet “urgent national security requirements” never prevented an accord on cease-fires or served as a reason to resume hostility.

Thus, the all-out war now marking the runup to the Nov. 1 vote is the government’s deliberate political choice.

Previously, pre-election bloodshed was prevented in two ways. One was for the PKK to unilaterally declare a cease-fire. In the March 28, 2004, local elections, a truce the PKK had declared in 1999 was still in place. The July 22, 2007, general election, the March 29, 2009, local election and the Sept. 12, 2010, constitutional amendment referendum were preceded by the PKK’s unilateral nonhostility decisions. And the cessation of major operations by government forces meant Ankara had implicitly accepted the PKK cease-fires.

Nonhostility for the June 12, 2011, general elections, meanwhile, was secured thanks to secret talks in Oslo between the AKP government and the PKK. The eighth article of the protocol agreed to by the parties stipulated an extension of the cease-fire there for days after the elections.

The March 30 local polls and the Aug. 10 presidential election, both in 2014, and the June 7 general elections this year were held in nonhostile environments secured through the “solution and peace process” initiated in late 2012 with jailed PKK leader Abdullah Ocalan recognized as an interlocutor.

The AKP leadership’s willingness to seek some sort of cease-fire before each election had its logic and rationale: It wisely understood the AKP would be losing votes if elections were held amid daily reports of clashes, raids and operations from the predominantly Kurdish southeast, accompanied with daily funerals of police and soldiers.

The AKP government was thus able to create an optimistic outlook in the country as the “solution and peace process” largely stopped the bloodshed. This process — also called the “Imrali process” after the prison island where Ocalan, the main interlocutor, is serving a life sentence — advanced under the slogan “Mothers should stop crying,” designed to drum up popular support for the talks.

One reason the Kurdish movement opted for nonhostility over violence was the growing importance of peaceful propaganda and parliamentary politics at a time when Turkey’s Kurdish issue was rapidly politicizing.

Now we face a legitimate question: What changed in Turkey that a government, which sought votes with the slogan “Mothers should stop crying,” is now letting mothers cry amid daily bloodshed since July 24? Why is the slogan now less important, albeit elections are only two months away?

Those are legitimate questions, since the alternative argument — that the PKK posed a serious and imminent threat to national security, forcing Turkey into confrontation — does not hold. Hence, the pre-election timing of the air raids on the PKK and the resulting resumption of hostility was also the government’s deliberate political choice.

This conclusion can be supported with another comparison. The supposed justification for the air campaign was the July 22 murder of two policemen in Ceylanpinar on the Syrian border. The murders, claimed by the PKK military arm, the People's Defense Forces (HPG), were in retaliation for the killing of 34 leftist activists July 20 in the border town of Suruc by a suicide bomber said to belong to the Islamic State (IS). The victims were on their way to war-ravaged Kobani across the border to help in reconstruction efforts. The PKK blamed the government for the attack.

Had the government not decided on an all-out war, it could have treated the murder of the two policemen as an isolated terrorist attack and responded proportionately, as it had in similar cases.

In October 2014, for instance, two senior police officials were killed in Bingol by the PKK amid violent mass protests in the southeast launched by Kurdish groups accusing Ankara of supporting IS in its siege of Kobani. Yet, Ankara did not respond by bombing the PKK in the Qandil Mountains. It was so because Erdogan had not yet decided to call off the status of nonhostility.

So why is Erdogan opting for confrontation now? One answer to this question has come from Selahattin Demirtas, co-chair of the Kurdish-dominated Peoples’ Democracy Party (HDP). “One of the objectives of all ongoing air, ground and media operations is to hit the HDP in early elections,” Demirtas tweeted July 26, shortly after Turkish warplanes began pounding Qandil.

The leader of the main opposition Republican People’s Party (CHP), Kemal Kilicdaroglu, also lashed out at Erdogan as the person “responsible for the bloodshed, chaos and terror.” Speaking ahead of a party meeting Aug. 23, he further said, “What they are after is [saving] their seats of power. Turkey has been deliberately brought to this point. They are creating chaos, trying to tell [voters] that all this is happening because they did not vote for them.”

Let’s recall here that the main reason the AKP lost its parliamentary majority and thus the chance to form the government on its own was the HDP’s success in passing the 10% national threshold to enter parliament, mustering over 13% of the vote.

It’s well-known that Erdogan has been pressing for early polls ever since June 7, hoping to make his party a single-party government again. That prospect is almost certainly impossible unless the HDP is pushed under the threshold.

Then other questions arise: Who will benefit from the renewed war against the PKK? Will the AKP reclaim its votes? Will the HDP lose supporters? The answers seem in the negative at present.

According to Metropoll, a respected polling company, the AKP’s vote stood at 41.7% in mid-August, above the 40.8% it got June 7, but still not enough for a single-party government. The survey, which asked 2,520 people in 26 provinces who they would vote for if elections were held Aug. 23, found that, despite all setbacks, the HDP had boosted its vote to 14.7% from 13.6%, with more Kurds abandoning the AKP in anger over its policies.

The climate of violence “has not and will not boost the AKP vote,” Metropoll founder Ozer Sencar told the Hurriyet daily Aug. 26. “The government must comprehend that its attempts to reduce the HDP vote with extraordinary means will not work.”

In sum, the government’s decision to end the state of nonhostility with the PKK has proved wrong for its own political interests.