The stability of Iraqi Kurdistan might again be at risk after the Turkish government, led by the AKP, launched its most extensive raids against PKK positions in years. 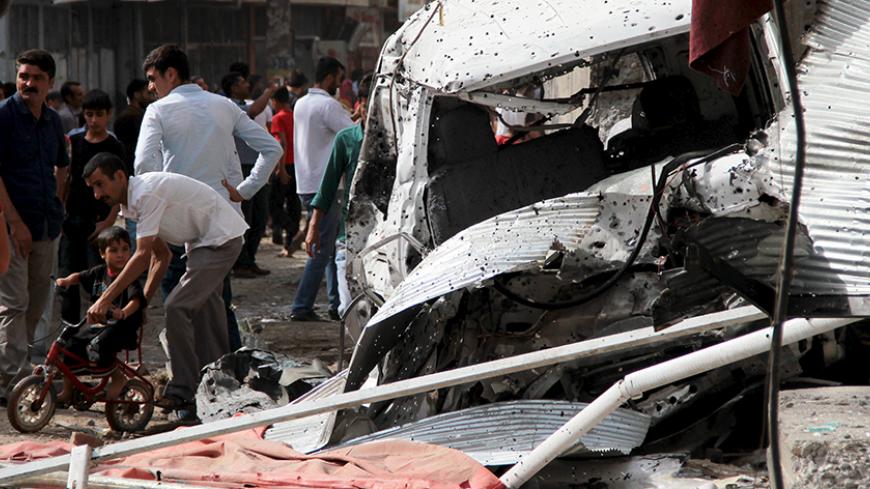 Residents walk past a destroyed vehicle after intense clashes between the Kurdistan Workers Party (PKK) and the Turkish army in the southeastern town of Cizre, Turkey, Sept. 12, 2015. - REUTERS/Sertac Kayar

ERBIL, Iraqi Kurdistan — Iraqi Kurdistan's prospects of stability might be affected by the renewed resolve by Turkey's Justice and Development Party (AKP) to fight the Kurdistan Workers Party (PKK), even after its spectacular victory in the snap elections on Nov. 1.

Turkish warplanes conducted their first extensive raids in years on PKK positions in Iraqi Kurdistan in late July, and thus rekindled after a couple of years a decadeslong conflict between the Turkish state and the PKK. Many argued it was an attempt by the beleaguered ruling AKP to win the snap elections after it failed to secure a single-party government in the June elections. In June, the AKP won 258 seats, 18 seats short of the majority needed to form the government on its own.

The AKP government used the murder of two policemen in border areas with Syria on July 22 as a pretext to launch a renewed military campaign against the PKK. The killing of the two policemen came in the wake of an alleged Islamic State (IS) suicide attack on a gathering of leftist youths in the southern Turkish town of Suruc. Following the assassination of the policemen, PKK factions sent out contradictory messages, at first claiming responsibility and then denying any involvement in the death of the policemen.

The idea behind the AKP's renewed attacks on the PKK since July, observers believed, was to shore up nationalistic sentiments against the group and harness that to AKP's benefit in the November elections. The AKP got what it wanted and won enough votes to form a single-party government again for the fourth time since 2002.

The blazes of the conflict between the PKK and Turkish military have also reached Iraqi Kurdistan, as the Turkish military conducted intense air raids against the PKK, which in one case led to the death of at least eight civilians in the village of Zargali.

If there were any hopes that Ankara might seek a new approach after the November elections, Turkish fighter jets dashed them as they conducted intensive air bombardments of the PKK inside Iraqi Kurdish territory on Nov. 2 and Nov. 5, and most recently on Nov. 20.

"Terrorist groups like the PKK should not be part of the peace process," Sinirlioglu said defiantly during a panel Nov. 4 in Erbil with Iraqi Kurdistan's Prime Minister Nechirvan Barzani. He did not elaborate on whom Turkey would take as its partner for resolving the country's long-standing Kurdish question.

The escalation of the conflict between Turkish security forces and the PKK has put the Kurdistan Regional Government (KRG) of Iraq in a tough position, adding another potential element of instability to the difficult circumstances it is already grappling with. The Iraqi Kurds are faced with the threat posed by IS along a frontier of over 1,000 kilometers (621 miles) and are gripped with a serious economic crisis. The spillover of the PKK-Turkish conflict into Iraqi Kurdish territory presents another major challenge for the KRG.

"We are not in favor of violence," KRG spokesman Safeen Dizayee told Al-Monitor. "Turkey has neither taken our opinion [on the renewed conflict with the PKK] nor has it informed us about what it is doing."

Dizayee also lashed out at PKK leaders in the Qandil Mountains of northern Iraq for "disrupting the cease-fire" with Turkey, referring to the alleged killing of two Turkish policemen in July.

"We encourage dialogue to resolve the issues. We can assist with that as in the past we managed to convince the PKK to give up violence," Dizayee added.

Despite nearly four months of fighting, the PKK declared a unilateral cease-fire Oct. 12 so that the polls could be conducted in a more favorable climate. But after Ankara struck PKK positions following the elections, the Kurdish fighters also ended the cease-fire, launching attacks on military targets inside Turkish territory.

There is a lot at stake for Iraqi Kurds if the conflict between Turkey and the PKK escalates and extends into KRG territory.

Relations between Iraqi Kurdistan and Turkey have improved dramatically in recent years. While as recently as 2008 Turkey made threats against KRG authorities for the PKK's presence on Iraqi Kurdish soil, now Turkey is the main route for KRG oil exports and its major trade partner.

On July 28, the pipeline carrying KRG oil to the Turkish Mediterranean port of Ceyhan was sabotaged and the PKK took responsibility for it. That prompted a harsh statement from the KRG and PKK officials later saying they did not know the pipeline was carrying KRG's oil.

The KRG has not condemned the Turkish attacks on the PKK inside Iraqi Kurdistan's territory with the exception of the Zargali raid.

Many find Turkey's new approach with regard to the PKK perplexing.

Kenneth Pollack, a Middle East expert and fellow at the Washington-based Brooking Institution, told Al-Monitor that it is difficult to read the mind of Turkish President Recep Tayyip Erdogan when it comes to the Kurdish issue and the PKK.

"It's clear that playing the anti-Kurdish card was a critical element in helping Erdogan win the elections. But what we don’t know is how he is going to come out of the elections," Pollack said.