Turkey is increasingly becoming the scene of Rojava-inspired Kurdish resistance. 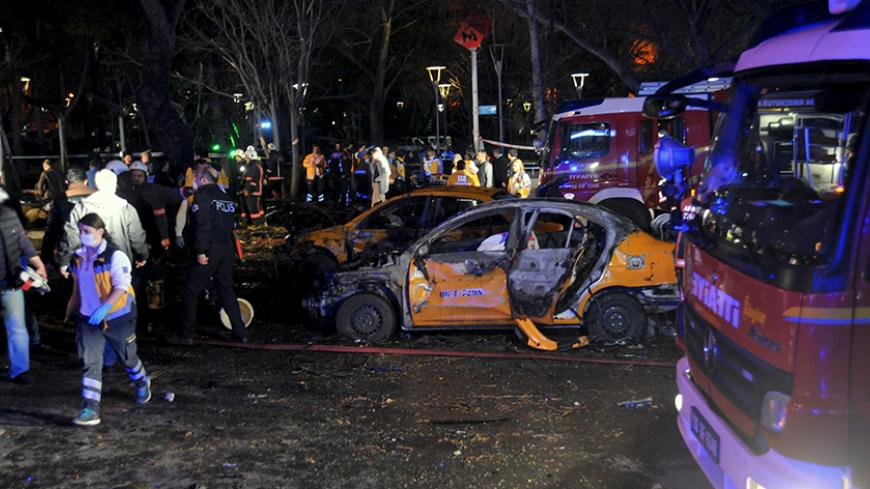 On Feb. 17, Ankara witnessed its first suicide attack carried out with a moving vehicle. The attack targeted a military shuttle bus, killing 29 people, mostly military personnel. In a column I wrote after that attack, I asked if that was just the beginning.

Twenty-five days later, about a kilometer (half a mile) from the scene of the Feb. 17 bombing, there was another suicide bombing, again with a moving vehicle. However, this attack, at the central square of the city, was against civilians. The March 13 attack killed 37 people, wounded 125 and shook the country to its core.

That was the third suicide attack in Ankara, following the Oct. 10 Islamic State (IS) attack near the central train station and the Feb. 17 explosion.

As I emphasized in a Dec. 30 column titled “Are clashes spreading to western Turkey?” the government is engrossed in long-term sieges of towns such as Yuksekova, Sirnak and Nusaybin to disrupt the logistics lines of the Kurdistan Workers Party (PKK) and its newly established youth wing, the Civil Defense Units. Ankara is bent on undermining the Kurdish resistance by combat.

The plan is to first clear out the trenches and barricades in towns and then deploy forces based in permanent outposts to restore state authority over the restive neighborhoods. The PKK has only one card to play to confront Ankara’s increasing pressure, and that is to carry the battles to western Turkey.

The Ministry of Interior announced that the key perpetrator of the March 13 Ankara attack was Seher Cagla Demir, a female university student. Demir joined the PKK in 2013, went to northern Syria in December of that year for military training and joined the clashes there. There are also media reports that a second perpetrator was a male Turkish citizen named Ozgur Unsal, whose linkage with the PKK has not yet been established.

Among 29 people detained in Istanbul, there are nine lawyers, including Demir's lawyer, Huseyin Bogatekin. Demir was actually on trial for belonging to the PKK, but had not been detained during the proceedings. In nationwide anti-PKK operations after the Ankara bombing, 320 people have been rounded up so far.

Reports said the vehicle used in Ankara was stolen Jan. 10 from Sanliurfa. According to initial reports, the bomb was made up of about 100 kilos (220 pounds) of C4 plastic explosive. Its detonation system was concealed in a special pocket made to foil X-ray checks.

The government's draconian reporting limits have kept this from being confirmed, but reports suggest the woman was driving the car that exploded next to a bus. The burned but intact body of a man that was found outside the car indicates that he wasn’t in the car when it exploded. He might have been tasked with blowing himself up as crowds assembled — especially police officers from the nearby riot police base — but didn’t have time to do it. It is possible that a third person exploded the car with a remote control as the woman was driving.

The Kurdish Freedom Falcons (TAK), which had claimed responsibility for the Feb. 17 attack, has not commented on the latest bombing. However, all signs again point to the TAK, a semi-autonomous, armed outfit that carries out attacks under the PKK umbrella. The PKK supports the TAK ideologically and provides it with personnel, logistics and financing. Then what makes the TAK semi-autonomous? The PKK, which has a rigid hierarchical structure with strict internal discipline, now allows the TAK to decide the nature, location and timing of its operations.

In other words, PKK leaders, after authorizing the TAK to carry out an operation, learn about the outcome from TV reports.

This freedom of action granted to a lower-level leadership makes its operations unpredictable and harder for security forces to track TAK members down and prevent attacks.

Also, because the TAK is using vehicles for its attacks, security forces and intelligence units must cover the entire country instead of focusing on one urban area. This makes monitoring suspicious vehicles particularly difficult.

The PKK, which is becoming a true umbrella organization that uses proxies to launch attacks in western Turkey, forces Ankara to think hard about how to deal with this new wave of terror. It is certainly imperative for Ankara to form a special task force that will be free from the shackles of bureaucratic hierarchy and that operates in all parts of the country with the full backing of all public bodies. Ankara, still burdened with security mayhem, has yet to come up with a comprehensive and integrated strategy to combat such attacks.

Ankara must recognize that the PKK, because of its combat against IS, has achieved significant global legitimacy. By not claiming credit for attacks in western Turkey, the PKK protects that legitimacy while still disrupting Ankara’s plans to boost its forces in the southeast for the coming spring clashes. That eases the pressure on PKK forces in that region.

The PKK leaders' stance is simply: “We don’t approve of these attacks, but we can’t stop the angry Kurdish youth.”

The commonality between the perpetrators of the Feb. 17 attack and this latest one is their long stays in northern Syria where they received military training.

This is a matter that Ankara — which maintains its stern attitude toward Rojava (Syrian Kurdistan) and is expanding its fields of operation in the southeast — must think about. There are cracks appearing in the PKK. In addition to the long-established PKK military command in Iraq’s Qandil Mountains, now Rojava is emerging as a regional inspiration center of leftist and secularist armed Kurdish resistance. This new power center is somewhat influenced by Shiites and Alawites, friendly to Russia, warm with Iran and fervently anti-IS. The message to Qandil is, “We will not allow you to use Rojava dynamics as an appetizer in your bargaining with Ankara.”

True, this new Kurdish power in Syria is under the patronage of the PKK, which is working full time to nurture a regional, young Kurdish resistance of ethno-nationalist and anti-jihadi character.

This latest attack also exposed a dangerous trend in Turkey’s domestic politics. Now when a part of the population harshly criticizes the Justice and Development Party government over such attacks, another segment castigates this criticism as terror propaganda. This terror conundrum is becoming the main agenda item shaping the debates in the Turkish media and influencing the policies to be developed.

In the midst of this debate, Ankara has declared operations at Silopi, Cizre, Sur and Idil “mission accomplished” and is trying to emphasize the reconstruction of massive damages to those towns while simultaneously launching massive security operations in Sirnak, Yuksekova and Nusaybin.

Therefore, Ankara cannot discount the likelihood of additional terror acts in different parts of the country.