The youth unemployment rate in Turkey’s conflict-torn southeast has shot up to nearly 25% in some areas, offering fertile ground for recruitment to Kurdish and Islamist terrorist groups. 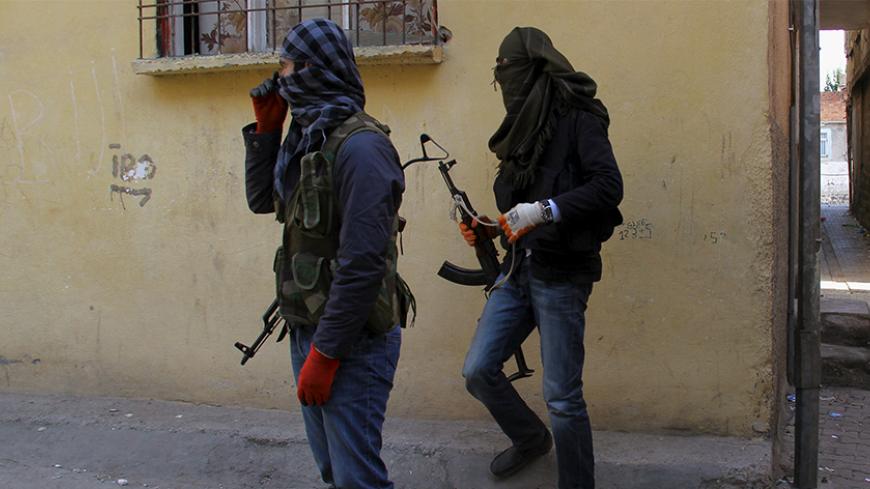 Masked members of the youth wing of the Kurdistan Workers Party (PKK) stand on a corner in the Sur neighborhood of the southeastern city of Diyarbakir, Nov. 6, 2015. - REUTERS/Sertac Kayar

ANKARA, Turkey — The rising wave of terrorism in Turkey’s big cities has sparked debates on the various aspects of the attacks, committed on what appears to be on a rotating basis by the Islamic State (IS) and the Kurdistan Freedom Falcons (TAK), a radical offshoot of the Kurdistan Workers Party (PKK). The discussion has focused on the reasons that made Turkey a playing field for terrorists and the security and intelligence failures behind the attacks. Another crucial topic, however, is the recruitment methods of terrorist groups and how young people are cajoled into becoming suicide bombers.

After the car bomb that the TAK detonated in the heart of Ankara on March 13, authorities identified the female suicide bomber as 23-year-old university student Seher Cagla Demir, which further fueled discussion on how young people are drawn to terrorist groups and the economic conditions that facilitate their recruitment.

According to March 23 figures by the Turkish Statistical Institute (TUIK), the country’s overall jobless rate stands at 10.3%, while unemployment is much higher at 18.5% in the 15-24 age group, with 22% among females and 16.5% among males. On a regional basis, unemployment is highest in the mainly Kurdish eastern and southeastern provinces, which, since last year, have been the theater of bloody urban clashes between the security forces and the PKK, coupled with terrorist attacks, lengthy round-the-clock curfews, massive destruction and civilian deaths. The area TUIK designates as TRC3, comprising the provinces of Mardin, Batman, Sirnak and Siirt, tops the unemployment list with 24.8%, followed by the TRC2 area, covering Diyarbakir and Sanliurfa, with 17.5%. Hence, rampant unemployment in the region — two times higher than the country’s overall — emerges as an important element driving recruitment to the PKK and IS, along with ethnic and political factors.

In an interview with Al-Monitor in September 2014, PKK commander Cemil Bayik said the number of new recruits had shot up despite settlement talks with Ankara at the time, exceeding the pace of recruitment in its heyday in the early 1990s. “There is a lot of alienation. The number of people joining our ranks last month has exceeded that in 1993. In 1993, around 1,000 people would join every month. Last month, 1,200 people joined,” he said. Government officials also confirmed the trend. Siirt Gov. Ahmet Aydin, for instance, publicly rang the alarm over dozens of young people joining the PKK from his province. Turkey’s top Kurdish political leader, Selahattin Demirtas, for his part, said the new recruitments were resulting from widespread Kurdish mistrust in the settlement process and urged Ankara to take confidence-building steps.

The fact that IS and TAK suicide bombers who have struck Suruc, Ankara and Istanbul since last year hailed from eastern and southeastern provinces speaks, among other things, of rising despair among young people in regions hit hard by poverty and unemployment.

Last summer, Turkish politician Umut Oran, the vice president of the Socialist International and a former lawmaker for the main opposition Republican People’s Party (CHP), conducted a field study in Adiyaman, which has emerged as one of IS’ main recruitment grounds in Turkey. He said the study found that money was a key element in the group’s strategy of luring jobless youths to its ranks. Locals told Oran that new members received a $6,000 bonus upon recruitment and then monthly salaries of up to $1,200, which are quite lucrative sums both in terms of the high poverty levels in the southeast and Turkey’s general economic conditions.

Ahmet Said Yayla, a scholar at Sanliurfa’s Harran University, estimates that some 5,000 Turkish nationals have joined armed groups in Syria, including 1,200 in IS ranks, stressing that material benefits played an important role in the recruitment process along with cross-border kinship links.

In early February, Prime Minister Ahmet Davutoglu unveiled a "master plan" for the southeast, which included some political and social measures but focused mainly on economic steps to create jobs and resuscitate local economies, including the postponement of debt repayment and new loans for shopkeepers, farmers and industrialists. However, almost two months on, the government has yet to take action on the plan, while clashes, curfews and devastating security operations continue in the region.

In earlier measures designed to assist young people, the government announced special loans for young entrepreneurs and financial aid for those who get married, including state funding for a savings scheme known as a “dowry account.”

Critics, however, say such measures are unrealistic and superficial given the rampant unemployment among young people. According to senior CHP member Erdogan Toprak, the army of jobless youths constitutes a “serious potential” of recruitment for terrorist groups, which the government could hardly stamp out with its current measures. “They are deluding young people with unrealistic promises like dowry accounts and marriage loans. With what money is a jobless youth supposed to open a dowry account and save money for three years? Doesn’t this amount to mocking the youth?” Toprak said in a statement earlier this month.

In its most recent step to create jobs for the young, the government drafted legislation to recruit 15,000 new police officers and authorize the Directorate General of Police to seek more if needed.

Cem Kilic, a professor of labor economics at Ankara’s Gazi University, notes that Turkey tops the Organization for Economic Cooperation and Development (OECD) list in terms of "idle youths" who are neither employed nor enrolled in any educational or training program. Over 31% of Turkish youths in the 15-19 age group fall into this category, more than double the OECD average. Kilic warns that the problem represents a time bomb ticking for a social explosion unless urgent measures are taken.