More than a third of the Syrian refugees in Turkey are concentrated in the country’s southeast, an impoverished, conflict-torn region with a predominantly Kurdish population. 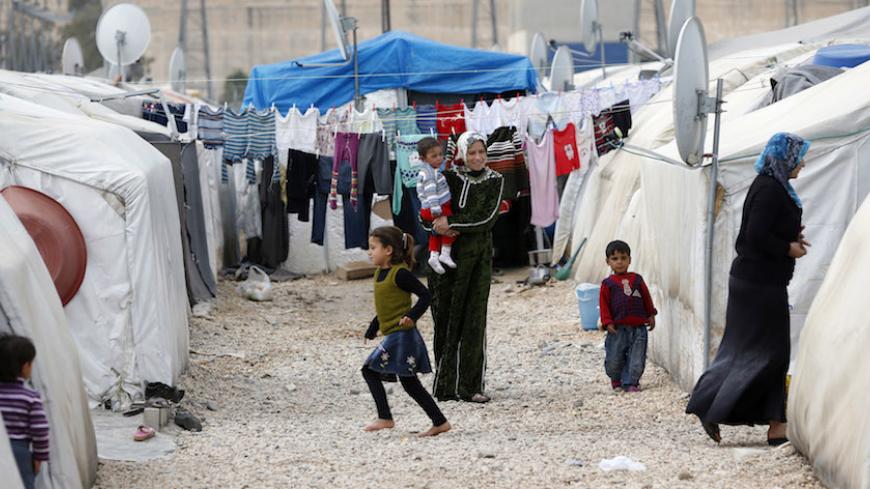 Syrian refugee women stand outside their tents at a refugee camp in Nizip, in Gaziantep province, near the Turkish-Syrian border, March 17, 2014. - REUTERS/Murad Sezer

Five years into the Syrian civil war, not one of Turkey’s 81 provinces is without a refugee community, big or small. The border province of Sanliurfa tops the list in numbers of refugees, with 401,000 Syrians, followed by Istanbul with 394,000. Bartin, on the Black Sea coast, has the fewest, at 27. In terms of region, the southeast has the largest concentration of refugees, with the provinces of Gaziantep, Diyarbakir, Sanliurfa, Batman, Adiyaman, Siirt, Mardin, Kilis and Sirnak hosting a total of slightly more than 1 million Syrians. In other words, more than a third of the 2.75 million Syrians in Turkey live in the southeast, mainly because of kinship and cultural bonds with border communities, among other factors.

Some in Turkey, however, see politics behind the refugees' concentration in the southeast. At a panel organized by Istanbul’s Bilgi University in December, Ayhan Kaya, a scholar of international relations at the university, argued that a “social engineering” effort was underway to balance the southeast’s mainly Kurdish population and curb the rise of Kurdish nationalism. His colleague Ilter Turan saw no direct link between the refugee wave and the Kurdish issue, but agreed that the Syrians, who are overwhelmingly Arab, were indeed changing the ethnic composition of the southeast. Murat Erdogan, head of the Migration and Politics Research Center at Ankara’s Hacettepe University, also dismissed the claim of social engineering, arguing that the Turkish government did not foresee the refugee influx reaching such proportions and therefore had no basis for planning such a policy.

Nevertheless, Ersoy Dede, a columnist for the staunchly pro-government daily Star, last month advocated altering the southeast’s demographics by permanently settling Syrians in the region. “There was a demographic transformation project hatched up decades ago,” Dede wrote.

He then proposed, “Let’s give these people the right to [Turkish] citizenship. Let’s settle them in housing estates in the cities of the east and the southeast. Let’s have them reside in Hakkari, Mardin, Diyarbakir and Sirnak.”

The local population in the nine southeastern provinces stands at about 8.4 million. Absorbing a refugee population as big as one-eighth of its size would not be an easy task for the region. Not surprisingly, social unrest and incidents of criminality have been on the rise. The refugees’ economic woes and the poverty that has long plagued the local population make for a dangerous mix that the smallest spark could easily inflame.

Last month, for instance, locals in Sanliurfa took to the streets one night, chanting, “We don’t want the Syrians,” after a young man was robbed and stabbed, allegedly by Syrians. “We no longer have tranquility nor safety. We demand immediate action to stop the robbery and theft that [Syrians] commit against our people,” said Mustafa Sariknaci, the neighborhood headman.

In another incident in the city, some 50 local men armed with sticks and knives took to the streets after a resident was stabbed in a brawl with refugees. The group harassed young Syrians gathering at a city square for a Ramadan event before police intervened to defuse tensions, detaining 10 people.

The physical altercations mostly involve men, but local women are not without their grievances. In Sanliurfa, the divorce rate increased 20% in 2015 because of local men taking refugee women as second wives, according to Hikmet Delebe, head of the city’s bar association. Syrian women agree to marry as second wives to “guarantee themselves” economically, Delebe said. “This creates domestic unrest and economic problems, which leads couples to seek divorce.” Another aspect of the refugees’ plight came into the spotlight through a police operation against illegal prostitution in Sanliurfa, during which 50 Syrian women were rounded up in an hour in entertainment establishments in the city.

Street melees and incidents of theft, robbery and rape have been reported in many cities across Turkey, mostly in the southeast, since the refugee influx began in 2011. The victims have sometimes been local Turks and Kurds and sometimes Syrians. Unrest between Syrians has also been reported, such as a recent brawl in a restaurant in Mardin, with Syrian employees attacking each other with knives, sticks and stones, leaving four injured.

Meanwhile, the rights granted to Syrian refugees have increasingly expanded. Following a series of measures on medical care, education and work permits, President Recep Tayyip Erdogan has floated the idea of a plan to grant refugees Turkish citizenship. The citizenship plan is expected to reduce social tensions fueled by economic strains, as naturalized Syrians would have more job opportunities.

The predominantly Kurdish southeast, meanwhile, would become a region with a pronounced Arab component. A number of southeastern provinces, especially Sanliurfa and Mardin, are already home to indigenous communities of Arab descent. Such a demographic shift would likely have political repercussions. In addition, tensions might escalate between local Kurds and the Syrians, who have more or less been supported by the ruling Justice and Development Party.

The region's meager level of prosperity would not help either. The unemployment rate in the southeast hit 24.8% in 2015, higher than any other region of the country and more than double the national average of 10.3%. It is hard to see how a local population grappling with serious economic woes can welcome a new army of poor to live peacefully side by side and build a bright future together.

The alleged plan of a politically motivated demographic shift may or may not be true, but one thing is clear — adding more poor, jobless and suffering people to an already impoverished, unemployment-plagued region will do nothing for its economic prosperity.