Attacks on Syrians in Turkey increasing

Increasing numbers of Turks are angered over the social and economic consequence of Turkey hosting some 2 million Syrian refugees. 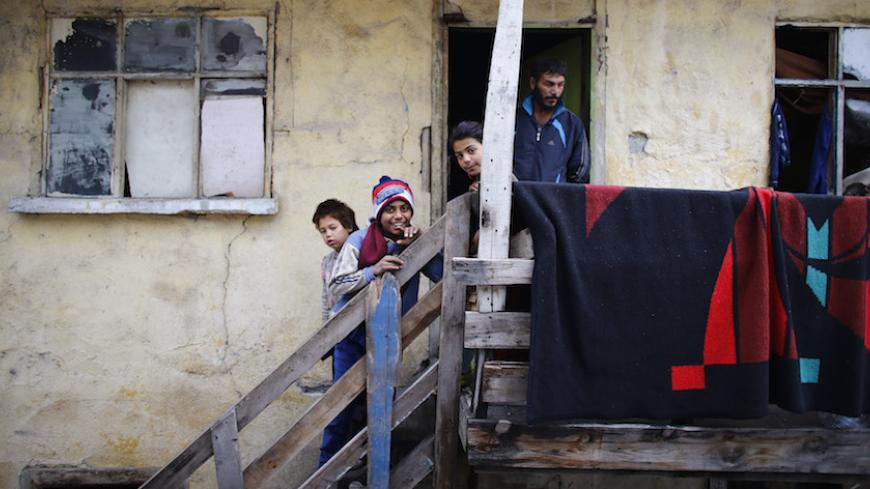 A Syrian refugee family is seen in front of their house in Ankara, Nov. 21, 2014. - REUTERS/Umit Bektas

The government of Prime Minister Ahmet Davutoglu continues to maintain Ankara’s open door policy for Syria refugees and to allocate state monies to support them. Although the government remains welcoming toward the refugees, it is hard to say the same for ordinary Turks, who believe their government's resources should be spent to alleviate poverty among themselves. The increase in the number of demonstrations against the refugees and attacks on them across the country, in cities as socially diverse as Istanbul and Gaziantep and Izmir and Urfa, attest to this.

At a May 13 address to NATO foreign ministers in Antalya, Davutoglu put the figure of Syrians currently in Turkey at more than 2 million. He bemoaned that while Turkey has spent more than $6.5 billion on the refugees, the total amount of international assistance received toward the effort was only around $365 million.

The past few weeks brought an upsurge in protests and acts of violence against the Syrian refugees. Some of these actions are said to be in response to the criminal activities of some of them, who are trying desperately to eke out a living to sustain their families.

Most Turks believe that there are far more Syrians currently in Turkey than Ankara acknowledges, because the majority of them are not registered. The government provides food and shelter for around 300,000 Syrians in official camps, mostly near the Syrian border, and the conditions there have been deemed to be more than adequate by international experts and concerned groups. The overwhelming majority of Syrians, however, are scattered around the country, many of them roaming from city to city in search of work or simply begging on the streets.

Public anger is not only being stirred by Syrian beggars becoming permanent features on the streets of cities and towns, but also because the refugees are undercutting already low wages and forcing up rents in mainly lower-income districts because of the increased demand for housing they create.

Recent surveys indicate that many Turks still view helping the needy Syrians as philanthropic, but these same surveys also reveal a significant amount of resentment. More and more people think there is a limit to how philanthropic Turkey can afford to be when millions of Turks are also facing unemployment and poverty.

According to a report issued at the end of April by the main opposition Republican People’s Party (CHP), Turkey has already spent $5.5 billion from its general budget on the refugees. It also incurred a loss of nearly $6 billion in exports during 2011-2014 due to the war in Syria.

The CHP report underlines the increasing unemployment rate resulting from the influx of refugees. As an example, it points to the city of Mardin, in southeastern Anatolia, where the unemployment rate stood at 12.3% in 2011 but jumped to 20.6% in 2013. It is thought to be even higher today.

Most of the Syrians choose to head for Istanbul, Turkey’s largest city, or to Gaziantep, in southeastern Anatolia, near the Syrian border. According to official figures from the Ministry of Interior, the number of Syrian refugees in Istanbul alone stood at 500,000 in August 2014. The number in Gaziantep was estimated at more than 200,000, while others put the number at 250,000.

Confrontations between local people and the Syrians living outside official refugee camps appear to be inevitable given these large numbers. An angry crowd in the southeastern city of Sanliurfa, reportedly organizing through social media, tried recently to demonstrate against the Syrians, but was prevented from doing so after the city’s governor mobilized the riot police to protect the refugees.

A group of 20 youths, angered over the ban, attacked three Syrian passersby, stabbing one in the leg. The Syrians took refuge in a local shop whose owner protected them from what turned into a lynch mob. The police detained 10 people, but such a response is unlikely to deter additional attacks on Syrian refugees.

May alone has witnessed violence against Syrians in Izmir, Gaziantep and Hatay. Some incidents are said to have taken place after Syrian involvement in attacks on locals and alleged accosting of local girls. These days, even rumors to this effect are sufficient to gather a crowd chanting “Syrians out!” or “We don’t want Syrians here!”

Pro-government analysts claim that most of the perpetrators of attacks are opposition party sympathizers, not supporters of the ruling Justice and Development Party (AKP). For example, Yusuf Ozkir, from the Ankara-based Foundation for Political, Economic and Social Research, maintains in a March article that the AKP’s welcoming attitude toward the refugees is shared by the majority of the party's supporters. Ozkir wrote, “Politicians who are in solidarity with the regime in Damascus, and media groups that maintain an editorial line supporting them, have a different attitude toward the refugees and criticize the AKP government for extending a helping hand to these refugees.”

A study by Murat Erdogan, head of the Center for Migration and Refugee Studies in Hacettepe University in Ankara, appears, to an extent, to corroborate Ozkir’s clearly partisan assessment. Erdogan’s study, “The Syrians in Turkey: Social Acceptance and Integration,” maintains that AKP followers are more inclined to be compassionate toward the Syrians than followers of other parties. He warns, however, that the xenophobia among some groups increases the risk of spreading enmity toward the Syrians in Turkey unless the government deftly manages this situation.

“The attitude displayed to date is a credit to Turkish people, but there is the risk that this situation could change rapidly,” Erdogan wrote. His survey, conducted in 20 provinces, indicates that 64% of those questioned believe it is an ethical duty to help the Syrians. The majority of these people nevertheless expressed serious concern over problems Turkey potentially faces because of the refugees.

The survey shows, for example, that 70.7% of respondents believe that the refugees are doing serious harm to the economy, and 61.2% feel that poverty-stricken Turks should be helped before the Syrians.

Meanwhile 62.3% think the refugees are disrupting the social order through involvement in violence, theft, smuggling and prostitution. In addition, those who say the Syrians are stealing employment opportunities from Turks fall between 56% and 69%, depending on the town or city.

More than 70% believe that the Syrians will create lasting problems for the country, while nearly 50% think the government’s management of the refugee crisis has not been satisfactory. These figures appear to suggest that most of those who believe it is right to help the Syrians also feel the refugees should be sent home as soon as conditions in Syria permit.

What is clear is that if Ankara continues to maintain an open door policy toward the Syrians without introducing concrete measures to counter the policy’s adverse social and economic effects, tensions between locals and refugees will continue to boil over, resulting in ugly scenes across the country like those of the past few weeks.