At least 76 people have been detained in connection with the rampage. 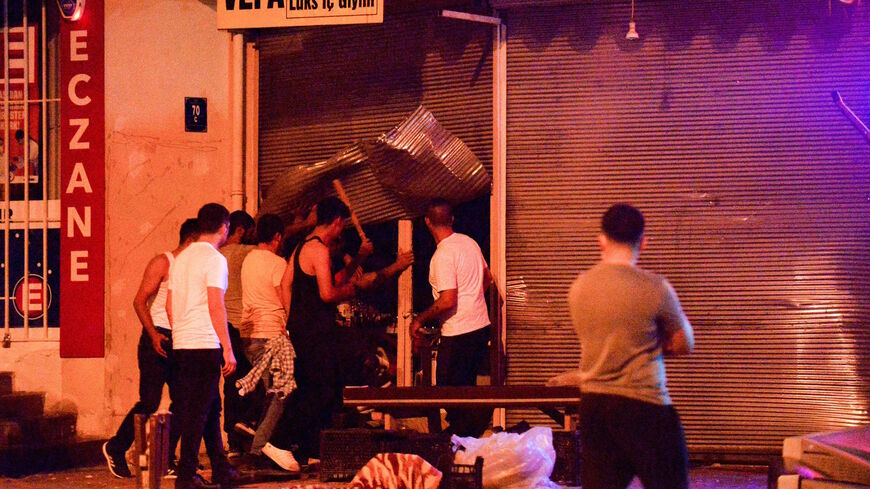 Men smash up shops and homes believed to be owned by Syrian families during unrest in Ankara, Turkey, during the early morning hours of Aug. 12, 2021. - STR/AFP via Getty Images

Millions of Syrians who found shelter in Turkey from the violence that has raged in their country since the start of the civil war there in 2011 are now facing growing hostility from their Turkish hosts amid a sharp economic downturn exacerbated by the COVID-19 pandemic. The brewing resentment toward an estimated 3.7 million Syrian refugees turned violent in the Turkish capital of Ankara on Wednesday night as hundreds of locals chanting slurs swarmed to the working-class suburb of Altindag and embarked on a vandalism spree, overturning cars, shattering windows and looting shops said to be owned by Syrians.

At least 76 people were detained in connection with the rampage, which was triggered by the death of an 18-year old Turkish man, Emirhan Yalcin. The teen was stabbed in a brawl between Syrian refugees in Altindag, a stronghold of President Recep Tayyip Erdogan’s Justice and Development Party (AKP).

Turkey has long been lauded for hosting so many Syrians, making it the largest refugee-hosting country in the world. Refugees account for 5% of its population of roughly 83 million.

Turkish patience is beginning to run thin amid rising joblessness, spiraling inflation and a pervading sense that the country is being invaded, foremost by Syrians, even as Turkish forces occupy big chunks of Syria and are accused of being invaders by the Syrian regime. “The educated ones go to Europe and we are left with the detritus — savages who spread their legs wide, pick their noses and talk loudly with an army of children on public transport. We have become a minority in our own land,” complained Serap Ozturk, a pro-secular housewife from Istanbul’s Goztepe district.

Ozturk says she votes for the main opposition Republican People’s Party (CHP). Scenting the public mood, the party has in recent months cynically played on the public's fears to squeeze Erdogan and the AKP. The CHP leader, Kemal Kilicdaroglu, has vowed that once in power he will send the Syrians back home within two years.

Presidential spokesman Omer Celik took aim at Kilicdaroglu on Thursday. “Competition is of course necessary in politics. But divisive and polarizing hate speech can never be construed as competition,” Celik tweeted. He added that Turkish security forces were in full control of the situation and that Yalcin’s killers had been apprehended. Celik urged the public to “not succumb to provocations targeting our national unity.”

Ankara police said individuals who had allegedly helped stoke violence against the Syrians through social media were among those being held in custody.

Many Turks have said they felt shame and horror upon seeing the hate being showered on the Syrians. Turks shared photographs of a Syrian boy who was wounded by the mob.

“Let us not surrender ourselves to inhumane ideologies such as racism and fascism,” tweeted a user who goes by the handle @Enveryan in typical commentary.

Others pushed back, insisting they are not against refugees but against "uncontrolled migration."

Syrians are gripped with fear and some believe their assailants are motivated by greed. An unidentified Syrian speaking to the left-leaning online news portal Sol Haber was filmed amid the wreckage of his home in Altindag, saying, “I will have to leave because they said they would come back. They will come back to steal.”

Yildiray Ogur, a columnist for the mildly oppositionist conservative Karar newspaper lamented the Syrian’s plight, tweeting, “He opened a shop, learned Turkish, is supporting his family, is paying taxes. … Why do you want this man to return to his country. Why is he being held responsible for a murderer’s crime? There is only one name for this groundless unease: racism.”

Political scientist Nezih Onur Kuru, who is studying public sentiment toward Syrian refugees, noted that anti-Syrian violence in Altindag, which is home to large numbers of unskilled and impoverished Syrians, is “neither new nor surprising.”

Places like Altindag, which have sprung up on the periphery of large cities, draw a steady stream of unemployed Turks from the countryside as well, making it a tinderbox. Kuru said he had recorded 246 separate incidents of violence against Syrian refugees since 2011.

In the early days, the government’s usage of the term “guests” resonated favorably with the Turkish public but over time, as it became apparent that many of the Syrian guests are here to stay, attitudes hardened. Kuru’s research suggests that no more than a quarter of Syrian refugees say they want to go back.

Erdogan’s sporadic reminders that Turkey has spent as much as $50 billion on them and occasional hints that they may be granted Turkish citizenship haven’t helped.

Nor has the European Union’s perceived treatment of Turkey as a holding pen for Syrians and other refugees the EU doesn’t want on its own soil. Since 2016, the European bloc has been giving Turkey billions of dollars to help with the maintenance of Syrian refugees.

They are now being joined by a growing number of Afghans as they flee Taliban forces. Between 500 to 1,500 Afghans are thought to be slipping into Turkey via Iran daily. Those numbers are set to rise as the Taliban continue to capture large swaths of territory from government forces. The Taliban claimed to have wrested Kandahar and Herat, the second- and third-largest cities respectively, Thursday.

Now, “Brussels has a plan to bribe Turkey to keep refugees from Afghanistan away from Europe. Estimates shows that there is a risk of 500,000 or a million Afghan refugees [coming],” Kilicdaroglu claimed July 25. Austrian Prime Minister Sebastian Kurz lent credence to his claim, telling the German newspaper Bild on July 26 that Turkey was a “more suitable place” to host Afghans than either Germany, Austria or Sweden.

Erdogan dismissed the claims in an interview with private broadcaster CNNTurk on Wednesday, asserting that Turkey was not a “roadside inn” for illegal migrants and that reports about the influx of Afghans were exaggerated and that over half a million foreign nationals were prevented from entering the country illegally last year. Ankara says it will build a 295-kilometer-long (183-mile) wall along the Iranian border to prevent human trafficking and other illegal activities.