After Jordan, will Turkey take the plunge with Assad?

After the Jordanian king spoke by phone with Syrian President Bashar al-Assad for the first time since the Syrian conflict began over 10 years ago, Turks are now asking if Ankara will be next to reconcile. 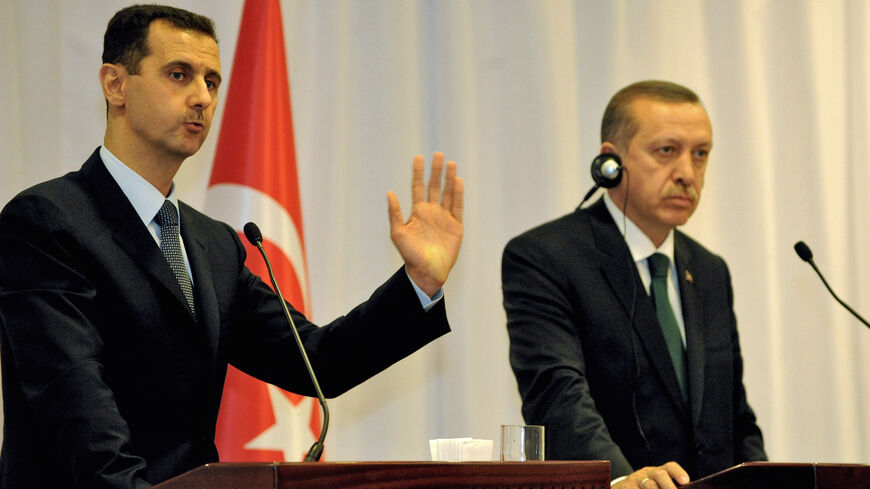 Jordan’s King Abdullah II, who backed regime change in Syria and allowed weapons to be funneled through his kingdom to opposition rebels, spoke to Syrian President Bashar al-Assad on Sunday. It was the first time the pair have communicated since the start of Syria’s devastating civil conflict a decade ago. The thaw, which also saw Jordan reopen its sealed borders with its impoverished neighbor, is seen as the latest indication that Assad is being rehabilitated after being shunned as a war criminal. With plenty of encouragement from Assad’s Russian mentors, the United Arab Emirates, Oman and Egypt have already made overtures to Damascus while Saudi Arabia is said to be engaged in informal talks with the Assad regime as well. The biggest game-changer, however, would be a similar U-turn by Turkey, which shares a 911-kilometer-long border with Syria, occupies large chunks of its territory and remains the premier mentor of Syria’s armed opposition.

Turkey's ruling Justice and Development Party (AKP) is in the midst of mending ties with its regional betes noires, Egypt and the UAE. Will it do the same with Assad? The question is being posed with increasing frequency on prime-time political debate shows. The  country’s president, Recep Tayyip Erdogan “would do anything” so long as it serves to sustain his power, said Sefik Cirkin, a veteran nationalist politician who opposed the campaign to oust Assad.

Turkey’s main opposition Republican People’s Party (CHP) and Cirkin's center-right Iyi Party have long advocated restoring ties with Damascus. Such calls are growing louder amid rising public resentment toward an estimated 3.7 million Syrian refugees residing in Turkey. Violent incidents targeting Syrians are on the rise. Soaring food prices and joblessness are feeding the hostility. The opposition is cynically exploiting the public mood to score points ahead of nationwide parliamentary and presidential elections that are scheduled to be held by 2023 at the latest.

CHP leader Kemal Kilicdaroglu, who reportedly received an invitation from Assad to visit Damascus, claims he would send the Syrians back home within two years of taking office. Opinion polls consistently suggest that an overwhelming number of Turks want nothing more. “The majority believe that sitting down with Assad is the key to solving the problem, and more AKP supporters than not feel the same the way,” Nezih Onur Kuru, a political scientist and pollster at Istanbul’s Koc University, told Al-Monitor.

Omer Onhon, Turkey’s last ambassador to Syria and the author of a recent book on his experiences there, finds the idea of sitting down with the Syrian dictator abhorrent. “This is a man who used chemical weapons against his own people,” Onhon told Al-Monitor. Yet he says talks can be initiated with regime elements on matters of common interest and that “once the conditions are ripe and, yes, realistically that will not be any time soon,” the Syrians need to be sent back to their country. “Their presence has become a domestic political issue. It's creating internal tensions.”

“Don’t get me wrong. I am not against the Syrian people in any way,” Onhon added. “Of course, they must be allowed to return for work, for education and as tourists, but within the boundaries of the law.”

Still, Erdogan could rightly argue that Syrians lured back by Assad’s promises of reconciliation are facing horrors similar to those that triggered the uprising in 2011, as currently witnessed in Daraa where it all began. Moving such large numbers of people against their will — the bulk of Syrians say they would like to stay — is in contravention of international law and difficult to engineer. And with the country in physical and financial ruins, where would they go and how would they survive? But with his party’s ratings at record lows, Erdogan well knows the opposition will riposte that it’s he who created the problem to begin with by arming and harboring opposition rebels, including an untold number of jihadis, long after the United States decided to leave Assad be.

Turkish Foreign Minister Mevlut Cavusoglu revealed last month that talks were underway with the UN’s refugee agency to repatriate Syrians. “It’s wrong to look at [the issue] in a racist and fascist way. On the other hand, if it [becomes] a social problem, it is necessary to find a solution by producing new policies,” he said.

The government claims that at least 450,000 Syrians have gone home and new measures are being introduced to ensure they stay away.

For example, since the start of the year, the AKP-run municipality of Fatih in Istanbul, often referred to as “Little Syria” because of the high number of Syrians there, has banned leasing apartments to foreigners. The district’s mayor said the foreigners were "harming the social fabric.” As of Sept. 2, Syrians refugees — Turkey calls them foreigners under "temporary protection” and refuses to grant them formal refugee status — can no longer register in Ankara. The decision followed deadly clashes between Syrians and Turks in the capital’s working-class suburb of Altindag. On Sept. 30, a Syrian stabbed and killed a 17-year-old Turk in Izmir’s Torbali district, prompting a similar spasm of violence.

As communal tensions escalate, there are emerging signs that Erdogan’s Syria policy may be on the cusp of another shift. Whether as sharp as in 2016 when —following its downing of a Russian fighter jet in Syrian air space — Turkey allowed then-rebel-held Aleppo to fall in order to stave off the Kremlin’s wrath, remains to be seen.

Cavusoglu told the NTV news channel last month that “a political meeting” meeting with Damascus “is impossible.” However, the government has made no secret of the fact that Hakan Fidan, Turkey’s spy chief who oversees relations with the Turkish-based Syrian opposition and a constellation of armed groups, has been holding secret talks with the Syrian head of the National Security Bureau, Ali Mamlouk. The pair were reportedly going to meet again at the end of last month in Baghdad, though the assignation remains unconfirmed.

More consequentially, perhaps, Erdogan said if it were up to him the United States would withdraw its forces from northeast Syria and Iraq “as they did from Afghanistan." This marks the first time Erdogan has publicly said he wants US forces to leave Syria. The conventional thinking has long been that despite its unremitting calls for Washington to end its alliance with the Syrian Kurds, Ankara wants the United States to remain in Syria as a counterbalance to Russia.

Erdogan’s remarks to CBS news anchor Margaret Brennan may well have been prompted by his anger at President Joe Biden for not granting him so much as a photo op on the sidelines of the United Nations General Assembly opening in New York last month. Or they may have been a sop to Russia’s Vladimir Putin ahead of his Sept. 29 meeting with the Turkish leader in the Black Sea resort of Sochi.

Either way, any pivot toward the Assad regime is unlikely to be driven by the political fallout from the refugee problem. Turkey’s unshakeable paranoia over Kurdish gains under US protection will likely be the root cause as it has been for Turkey’s three large military interventions in northern Syria, most recently in October 2019.

Unlike Trump, who greenlit Turkey’s Operation Peace Spring, the Biden administration has made it clear that no such gifts lie in store for Ankara and that an estimated 800 special forces will remain in northeast Syria for the length of its term. As such, Turkey’s best bet to achieve its goal of destroying the Syrian Kurds’ self-administration would be to secure a deal with the regime. Turkey would allow Assad to retake the rebel-held province of Idlib and back his claims that the country is safe for the return of refugees. This, in turn, would persuade the international community to release funds for Syria’s reconstruction. The UN would be at hand to oversee it all.

In exchange, Turkey would have unfettered freedom to go after Kurdistan Workers Party targets in Syria much as it did in the wake of the 1998 Adana Accords signed between Turkey and Assad’s father, Hafez, in the wake of Turkish threats to invade Syria.

This would suit Assad just fine since the Kurds, under US protection, have control over the country’s major oil fields, dams and agricultural land, and pose a greater threat to his authority than he is willing to admit. Russia, which is eager to see Assad regain full control, would likely go along. No matter how farfetched, anti-Kurdish nationalists within the security establishment, and like-minded hawks in the Turkish opposition, have convinced themselves the above could work and insist that Assad would prevent a further influx of Syrians to Turkey. The matter of how the United States is likely to respond remains unaddressed.

In any case, the famously pragmatic Erdogan is unlikely to be in any rush. Existing and potential refugees on both sides of the border, and now those flowing from Afghanistan, give Erdogan tremendous leverage over the European Union. The European bloc has been doling out hundreds of millions of euros to Ankara so that it keeps them away. Undocumented Syrians are also sources of cheap labor and fatter profits for greedy businessmen. A long-running conspiracy theory spun by the opposition is that Erdogan is granting Syrians citizenship to broaden his vote pool.

Omar Kadkoy, a policy analyst at the Economic Policy Research Foundation of Turkey, an Ankara-based think tank, scoffs at the claims, noting that an estimated 160,000 Syrians have been naturalized so far. Around half are under the eligible voting age. “The argument that Syrians will be kingmakers in the next elections is ridiculous. And if Erdogan’s survival depends on 80,000 Syrians, he must truly be desperate and in deep trouble,” Kadkoy told Al-Monitor. While a majority of adult Syrians who acquired citizenship might vote for Erdogan “as moral repayment,” this would likely be “a one off,” Kadkoy speculated. As for Syrian youths, “They are unlikely to vote for another one-man show, having fled another back home.”

Kadkoy is among those who believe it’s going to be “inevitable” for Ankara to reach out to the Assad regime but “perhaps not as fast as Ankara has been going with Egypt and the UAE.”

“What would propel Turkey is if Damascus, along with Moscow, could guarantee that the Kurdish influence in northern Syria would not grow further and would fall under the Syrian government’s control,” he said. The catch is that whatever hatred Erdogan feels for Assad is reciprocated by Syria’s strongman in spades. “Nobody can force Damascus to take back 6 million Syrians unless it dictates its own terms,” Kadkoy observed. Nothing decisive can happen before the 2023 elections, he predicted. And “Damascus can chill and wait for Ankara to make a move.”