There may be a limit to Turkey’s open-door policy for Syrian refugees, one that is taxing Turkey’s economy and society. 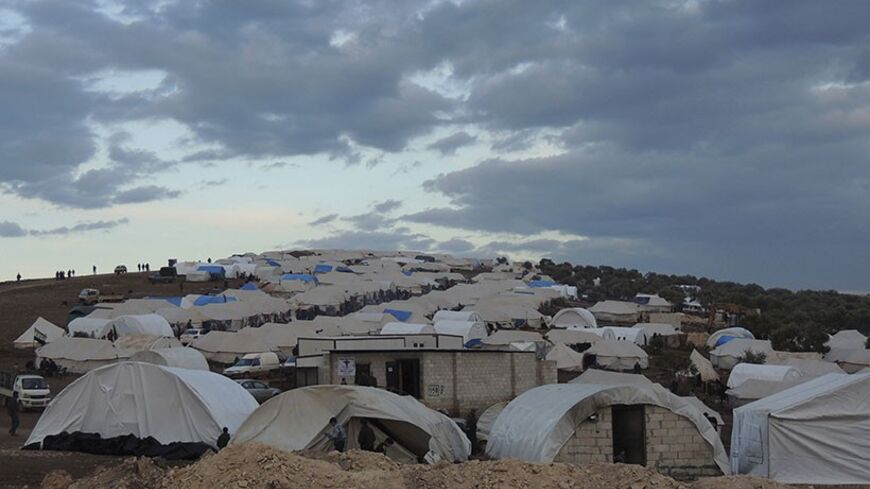 Syrian refugees are seen in a refugee camp on the Syrian side of the border with Turkey, near Idlib, Jan. 29, 2013. - REUTERS/Muhammad Najdet Qadour/Shaam News Network

With the Syrian civil war well into its third year, and no end in sight to the bloody conflict that has uprooted millions of people from their towns and villages, Turkey finds itself facing a growing Syrian refugee crisis that analysts are predicting will result in social tensions as patience among Turks starts wearing thin and the limits of people's hospitality are reached.

Talking to Public Broadcasting Services’ (PBS) Charlie Rose earlier this week, Prime Minister Recep Tayyip Erdogan said that there were over 700,000 Syrian refugees in Turkey, adding that only 200,000 were in official camps while the rest were spread out across the country.

But even these numbers are considered by the public to be unreliable, given the government’s open-door policy toward Syrian refugees, with some estimates running as high as 1.5 million. Whatever the actual figure may be the makeshift camps set up by Syrians in Turkish cities — mainly in Istanbul — and the increasing number of Syrian beggars on the streets has started to cause grumblings among Turks, forcing the authorities in some cases to take drastic measures.

Municipal officers from Istanbul’s Bayrampasa district evicted 100 mostly Turkmen Syrian families originally from Aleppo a few days ago from their makeshift camp, burning their tents and leaving some of the evicted with no choice but to take refuge with their families in a local bus station.

Yasin Sarikaya, the officer overseeing the operation told reporters that the Syrians were being evicted because of complaints from the owner of the land they were squatting on and from local citizens worried about sanitary conditions.

“They moved us out of our tents first and then set them on fire. Nobody has shown us a place to stay,” a refugee only named as Muhammed told reporters. This account was refuted by Sarikaya who said they wanted to send these people to official refugee camps. “But they preferred to go to their relatives. Some have stayed in Istanbul, but most were transferred to Urfa, Diyarbakir and Mersin. The municipality paid for their transfer,” Sarikaya said.

Sarikaya’s words actually reflect a fact that is being highlighted by many observers; rather than being housed in official camps, where immediate needs for food, shelter, health care and education for their children are met under relatively civilized conditions, many Syrians prefer to travel to larger cities where they believe better prospects await them.

In most cases, Istanbul is their first choice, but the Syrians are also traveling to the capital Ankara, and can be seen as far afield as the districts of the popular holiday resort of Bodrum. Only 35% of the estimated 1 million Syrian refugees in Turkey are currently said to be in the camps set up for them by the government.

The remarks of one of the evictees in Bayrampasa also points to another difficulty faced by the refugees if they are forced to go into official camps, and highlights the complicated nature of the situation Turkey is facing with regard to the Syrians. “We are Turkmen. We did not even get along with Arabs in Aleppo. The camps are dangerous for us. If we go to those camps, we would shoot each other,” this unnamed refugee told reporters.

It is, however, not just the makeshift refugee camps and the increasing number of Syrian beggars that is causing an increasingly public dissatisfaction among ordinary Turks. Talat Dincer, the head of the Chamber of Tradesmen and Artisans in the Mediterranean port city of Mersin, complained about the unregistered work places being opened by Syrians.

According to Dincer, the regional governor’s office estimates there are 35,000 Syrian refugees in Mersin, while the Syria Platform, a nongovernmental organization set up to monitor the refugees, maintains this figure is as high as 200,000.

“A local person has to work for weeks and gather scores of documents before he can open up a place, but the Syrians don’t do this. They open up unregistered work places and don’t pay taxes. This is resulting in undesirable tensions between Mersin tradesmen and the Syrians,” Dincer was quoted saying by local media.

A recent study by the Ankara-based Center for Middle Eastern Strategic Studies (ORSAM), on the other hand, shows that there are more Syrians today than locals in the Turkish border town of Reyhanli, as a result of which workers' wages have hit rock bottom. Reyhanli was also the scene of the Syria-related twin-car bombing in May 2013 that left at least 50 people, many of them locals, dead.

Reports from other towns and cities near the Syrian border show that rents have skyrocketed due to pressure for housing from the Syrians, further fueling refugee resentment by locals. Gungor Uras, a veteran economist and social commentator for daily Milliyet, spelled out the risk involved in his column recently.

“We prefer not to see it, and if we do we prefer not to take it seriously, but Syrian refugees have started to shake the social fabric and the economic structure in Turkish cities and will continue to do so,” he wrote on April 15.

The government, which has committed itself to an open-door policy for Syrian refugees is trying to do the right thing and coping to the best of its abilities as these problems mount. Addressing his parliamentary group on April 22, Erdogan indicated once again that Ankara’s policy toward the refugees would not change.

“Are we to close our doors on our brothers and say 'You can die in Syria'? Can we say this? I ask you, do we have a right to do this?” he asked his deputies. Erdogan, like many Turks, is nevertheless angry at the international community, and especially the West, for the limited financial support he says Turkey has received so far to handle the Syrian refugee crisis.

“We have spent $3.5 billion so far. The foreign support we got has only been $150 million — $50 million of this is from Saudi Arabia and $25 million from the UN. The rest is from various countries. It is us taking care of everything from providing food and education to health,” Erdogan told Charlie Rose in his PBS interview on April 28.

Turkey is of course not the only country having to deal with Syrian refugees. Figures indicate that Jordan, a country that is much poorer than Turkey, has to cope with an even larger number of desperate Syrians streaming across the border. But Turkey is currently worried about its own growing burden.

It is not clear how much longer Ankara can maintain its open-door policy before the deluge of Syrians results in the social and economic problems that analysts are warning about. At the moment, there are more questions being asked than answers being provided, as the problem grows for a Turkey that has on the whole been welcoming toward the Syrians until now.

But that may no longer be the case before long, unless the international community does more than just shower Ankara with praise for the help it is extending to these desperate people, while doing little itself. German President Joachim Gauck appeared to acknowledge this, too, after visiting a camp for Syrian refugees in Gaziantep during his official visit to Turkey this week, when he said his country, for one, could be doing more.

Not surprisingly many Turks feel this is a good opportunity for Gauck, and those in the West who think like him, to put their money were their mouths are.