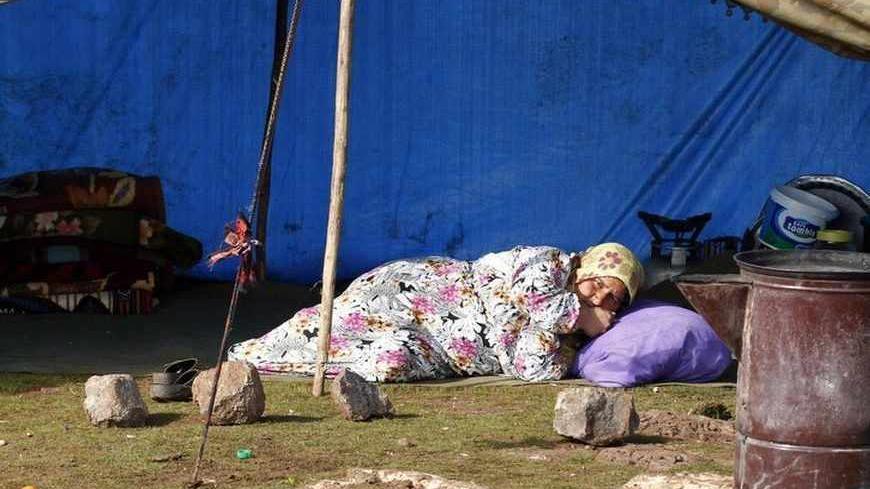 A Syrian refugee woman lies down as she rests in front of her makeshift tent in the town of Viransehir in Sanliurfa province, southeast Turkey, Feb. 10, 2013. Some 50 families, mostly from villages near Syria's Aleppo, prefer to settle in the outskirts of Viransehir instead of refugee camps run by the Turkish government. According to the families, this allows them to work as seasonal agricultural workers. - REUTERS/Umit Bektas

Domestic developments in Turkey have turned public focus away from Ankara’s growing problem with Syrian refugees. Caught between its welcoming rhetoric toward predominantly Sunni Syrians fleeing the wrath of Bashar al-Assad, and the realities on the ground in Turkey, Prime Minister Recep Tayyip Erdogan is finding it increasingly difficult to cope with the problem. All the while, he complains about the lack of international support in this regard.

Meanwhile, unease grows in Turkish towns and cities near the Syrian border where large numbers of Alevis sympathetic to Assad live. It seems that the welcome extended to fleeing Syrians by Ankara is wearing thin among locals, who are turning against the refugees, accusing them of disrupting the normal life of the region.

It is commendable, of course, for a country to open its doors to people fleeing violence, as Turkey has. Ankara also insists it will stick to its "open door policy" for Syrian refugees. Erdogan’s government has been getting much international praise for this, with the Brussels-based International Crisis Group (ICG) characterizing the Syrian camps in Turkey as “the best refugee camps ever seen" in its April 30 report, "Blurring the Borders: Syrian Spillover Risks for Turkey."

While highly pleasing initially, such praise is now seen by government officials as hollow. These officials indicate that the cost of looking after the refugees has reached the $1 billion mark (and increasing), while international assistance has not exceeded $100 million.

This was also underlined by Kemal Kirisci, from the Brookings Institution in Washington, who pointed out in a June 27 blog post the urgent need to assist to Turkey as it tries to cope with a major international humanitarian disaster.

According to figures obtained by Kirisci from government sources, Turkey is currently hosting close to half a million Syrian refugees. As of mid-June, over 200,000 reside in one refugee camp, while nearly 290,000 live outside these camps. Around 100,000 internally placed Syrians are reported to be awaiting entry into Turkey.

What makes the situation worse for the Erdogan government is that UN officials, cited by the US Congressional Research Service in a June 12 report, estimate that the total number of displaced people in Syria may reach 3.5 million by the end of the year.

Kirisci, for his part, cites UN estimates, which indicate that the total number of Syrian refugees in Turkey may approach a million by the end of the year.

Given this overall picture, a July 1 report by Human Rights Watch (HRW) reflects the fact that Turkey may be reaching the limit of what it can do for Syrians. According to HRW, Turkish border guards, like border guards in Iraq and Jordan, have started pushing back tens of thousands of Syrians, allowing only a limited number to cross, while the rest remain dangerously stranded.

HRW also reports that Turkey, along with Iraq and Jordan, has closed some border crossings for the Syrians. It maintains that only Lebanon has an open-border policy for Syrians. This, however, belies the insistence by the government of Recep Tayyip Erdogan that Turkey will maintain its open-door policy, come what may. At any rate, Ankara immediately rebutted HRW's claims.

The Prime Ministry's Turkish Disaster and Emergency Management Presidency (AFAD) said in a statement, published July 2 by Hurriyet Daily News, that it has been maintaining its open-door policy from the first day of the crisis, underlining the fact that this was corroborated by UN officials.

Turkish officials are nevertheless deeply disappointed that more international help is not forthcoming at a time when Turkey has undertaken such a massive humanitarian responsibility. According to the ICG, part of the reason why Turkey is not receiving more assistance is that it has restrictive rules that delay the registration of major foreign nongovernmental organizations, and slow foreign shipments of aid through its border points.

Meanwhile, Kirisci, like other observers — including the ICG — indicates that the Turkish public appears to be increasingly wary of the presence of an ever-growing number of refugees. "There are reports of complaints about property rents rising in towns and cities close to the border areas as well as about wages being pushed down by refugees who take up jobs in the border regions," Kirisci wrote in his blog post.

Referring to the issue of local discontent, the ICG indicated in April that several of the camps in Turkey are being used by predominantly Sunni opposition fighters from Syria as off-duty resting places to visit their families, receive medical services and purchase supplies.

"This is exacerbating sensitive ethnic and sectarian balances, particularly in Hatay province, where more than one third of the population is of Arab Alevi descent and directly related to Syria’s Alawites," said the report. Local discontent with the Syrian refugees is, however, not just restricted to the Alevis.

Anger toward the Syrians peaked after the twin car bomb attacks in the town of Reyhanli, near the Syrian border, on May 11. About 53 people, mostly Sunnis, were killed in the atrocity allegedly perpetrated by pro-Assad operatives in Turkey, who were later arrested and now face trials. There were angry demonstrations in Reyhanli against the refugees after the bombing by nationalist elements, leaving many Syrians in doubt as to whether they are safe in Turkey.

Already faced with difficulties as a result of their burgeoning numbers, Syrian refugees also have to cope with claims that are bound to agitate local Turks. Sefik Cirkin, a deputy for Hatay from the ultra-nationalist and predominantly Sunni National Movement Party (MHP), for example, said in June that some Syrians had been thwarted by the Turkish police as they tried to abduct the child of a prominent Turkish family in the region.

Indicating that Reyhanli and Antakya, the capital of Hatay province, were "sitting on a social bomb," as some tried to ignite sectarian conflict between local Alevis and Sunnis, Cirkin went on to ask in a loaded fashion, “What would have happened if this child had been abducted?”

The last thing Erdogan needs at a time when he is facing nationwide protests by anti-government elements, that are also angry over his failed Syria policy, is to have an Alevi-Sunni conflict on his hands, a prospect that has never been far from the surface in Turkey. Some would argue that he himself fueled sectarian animosity with his pro-Sunni Syrian policy.

Equally worrying for the government is the potential for conflict between Turks, regardless of their sectarian allegiances, and Syrians, whose presence is the cause of increasing discontent. This all makes for a dangerous brew that Erdogan will have to manage carefully with international support. In the absence of such support, it is clear that Turkey faces a seemingly intractable problem.