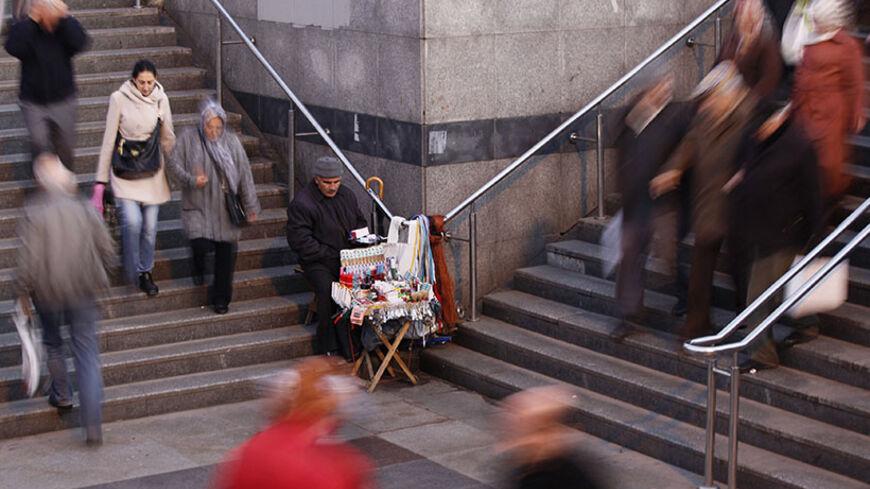 In Turkey, when we discuss the economy it is usually about inflation, the current deficit and interest rates. Unemployment, an economic barometer that directly affects the people, is generally ignored. As not all the unemployed register with the National Employment Agency of Turkey (ISKUR), the number of unemployed is much higher than official figures show. With the influx of Syrian refugees, there have been spikes in unemployment levels in some regions of the country where many employers prefer to hire Syrians over Turkish workers, as the Syrians work without benefits and for lower wages.

According to the latest data from the Statistical Institute of Turkey, as of March, unemployment stood at 9.7%, or 2,747,000. Compared with the same period last year, this is an increase of 0.3%. This increase may seem insignificant, but it means that 251,000 more people have joined the ranks of the unemployed.

Bearing in mind the unreported masses, the real total is certainly higher. Manual laborers who toil in plantations and fields and construction and textile workers are losing their jobs to Syrians. Many of the unemployed don’t report their status because they don’t believe that ISKUR will find them jobs or because they don’t know how to apply for help.

Unemployment figures are rising along with the ever increasing number of Syrian refugees in Turkey. According to the latest disclosure by Deputy Prime Minister Besir Atalay, the refugees now total 1,050,000.

There are 22 refugee camps in Turkey, but Syrians are all over the country, especially in the provinces of Hatay, Gaziantep, Kahramanmaras, Sanliurfa, Adana, Osmaniye and Mersin, which are close to the Syrian border. Those who have money set up their own businesses, but the majority work illegally. Tens of thousands of Syrians looking for jobs are willing to work at half the wages of Turkish workers, especially in the agriculture, production and service sectors. The recent increase in Arab tourism in Turkey enables the Syrians to easily find jobs at restaurants, cafes and souvenir shops. Their Arabic proficiency and low wage demands make them attractive for employers. In the first five months of the year, the number of Arab tourists coming to Istanbul has increased by 21% to 712,000. It is now normal for menus and real estate advertisements to be in Arabic.

Illegal Syrian workers are not only in Istanbul, but in all corners of Turkey. In Konya alone there are 40,000 Syrians working in all sectors, notably in shoe production. Mustafa Yavuz, the director of the Konya Social Security Agency, warns employers that they are liable for a 10,000 Turkish ($4,700) fine for each worker they employ illegally. But he says the agency is flexible on the employment of Syrians if the ministry’s permission is obtained.

Unemployment is rising faster in provinces where Syrians congregate. Employers prefer to employ Syrians, who make half the average Turkish wages and cost them about a third as much as a Turkish worker overall.

In the town of Osmaniye, for example, there are 10,000 Syrians. Unemployment there increased from 10% to 14% in one year and Syrian refugees are cited as the cause. Instead of the regular daily wage of 50 lira ($24), Syrians work for 20 ($10). In Mersin, unemployment went up by 3% in one year. The chairman of the Mersin Chamber of Retailers and Artisans, Talat Dincer, told Al-Monitor, “Refugees working at wages below the minimum wage and without social insurance cause the increase in unemployment. A solution has to be found soonest.” Dincer also said that some Syrians who don’t have residence and work permits illegally open places of business.

The situation in Sanliurfa, close to the Syrian border, is no different. Sanliurfa, with its population of 1.5 million, now hosts 155,000 Syrian refugees. While unemployment in the province was 6.2% in 2012, in two years it has climbed 16.3%.

Syrian refugees who find themselves in extremely difficult situations grab any job they can find. This boom in labor supply pushes wages down. A sudden upsurge of Turkey’s population by 1 million people has hiked up rents by 40-50%, especially in the provinces of Gaziantep, Sanliurfa and Hatay. The rising rent and increasing unemployment hit the poorer segment of the local population the hardest. More and more bank debt remains unpaid and the courts are overloaded with lien and sequestration cases.

In the provinces close to the border, Syrian traders are starting their own businesses. Their signs are in Arabic, as most of their customers are Arabs.

In many Turkish towns there are signs of "little Syrias" in the making. While the Syrians struggle to survive, poorer Turks are suffering and also struggling for basic survival. The Syrian refugee problem has become a state issue, but the state opts to look the other way. By refraining from taking action, the state may well be encouraging the Turks and Syrians to find their own ways out of the crisis.